A mini boom for the housing market? 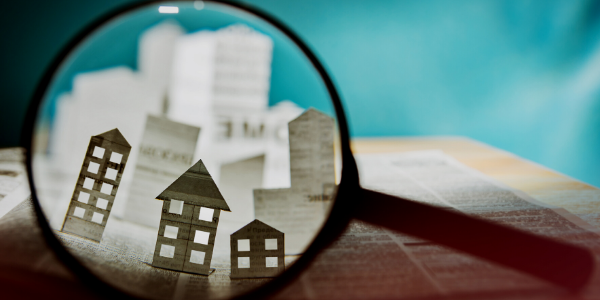 With the US Presidential election now decided (barring unlikely success in the courts), and a coronavirus vaccine by the year-end now looking a near certainty, markets are feeling positive about the prospects for 2021. But as noted before, much of the growth story for next year hinges on additional demand generated by a step up of investment activity across the global economy.

The backdrop for this is looking good. Central banks have committed to ‘looser for longer’ interest rates and yield levels, through continued asset purchases (our old friend quantitative easing), flooding the financial system with liquidity, while making the cost of investing cheaper than ever. This is allowing governments in the developed world to expand their fiscal support to ensure economies can bridge the gap between now and normality. This should protect the integrity of most businesses’ productive capacity by avoiding ‘economic scarring’ from this year’s activityconstraints. Importantly, it should also facilitate scaling up of fiscal stimulus investment programmes to boost growth once the pandemic is behind us.

There are dangers in relying on fiscal investment, however. For starters, we have already heard politicians in the UK, Europe and the US sound the austerity alarm bells. The UK Chancellor Rishi Sunak was urging spending restraint before the latest lockdown measures hit and Republicans in the US Senate remain intent on blocking fiscal largesse. More importantly, even if much-needed public spending measures find their way past political blockades, private sector investment will still be crucial for a sustainable recovery next year and beyond. Governments and central banks can provide liquidity and pump priming investment, but it is the private sector economy that drives perpetual re-investment cycles.

The private sector comprises (in an economist’s simplified world) households and companies. On average, companies across the world reduced their leverage after the 2008-9 financial crisis, only to rebuild it as the cost of financing continued to fall. For many, the virus episode has forced them to borrow more. While the cost of that finance may be very low, the capacity to increase it further is very limited.

Bond investors still seem comfortable in lending to large companies although, up until this week, equity investors have been ready to punish any business that appears to be weakening its credit ratings. Smaller companies, which are more important to the economy, have to rely on banks which in turn remain uneasy about lending to businesses that may well not be around in a few months’ time – despite instructions from central authorities. The US Federal Reserve’s Senior Loan Officer Survey was released earlier this week, and showed continued relative tightness of lending constraints to corporates. Lenders might have loosened these constraints slightly in the past quarter but the mood is still far from relaxed. Supply of bank loans is tight, demand for them is low. 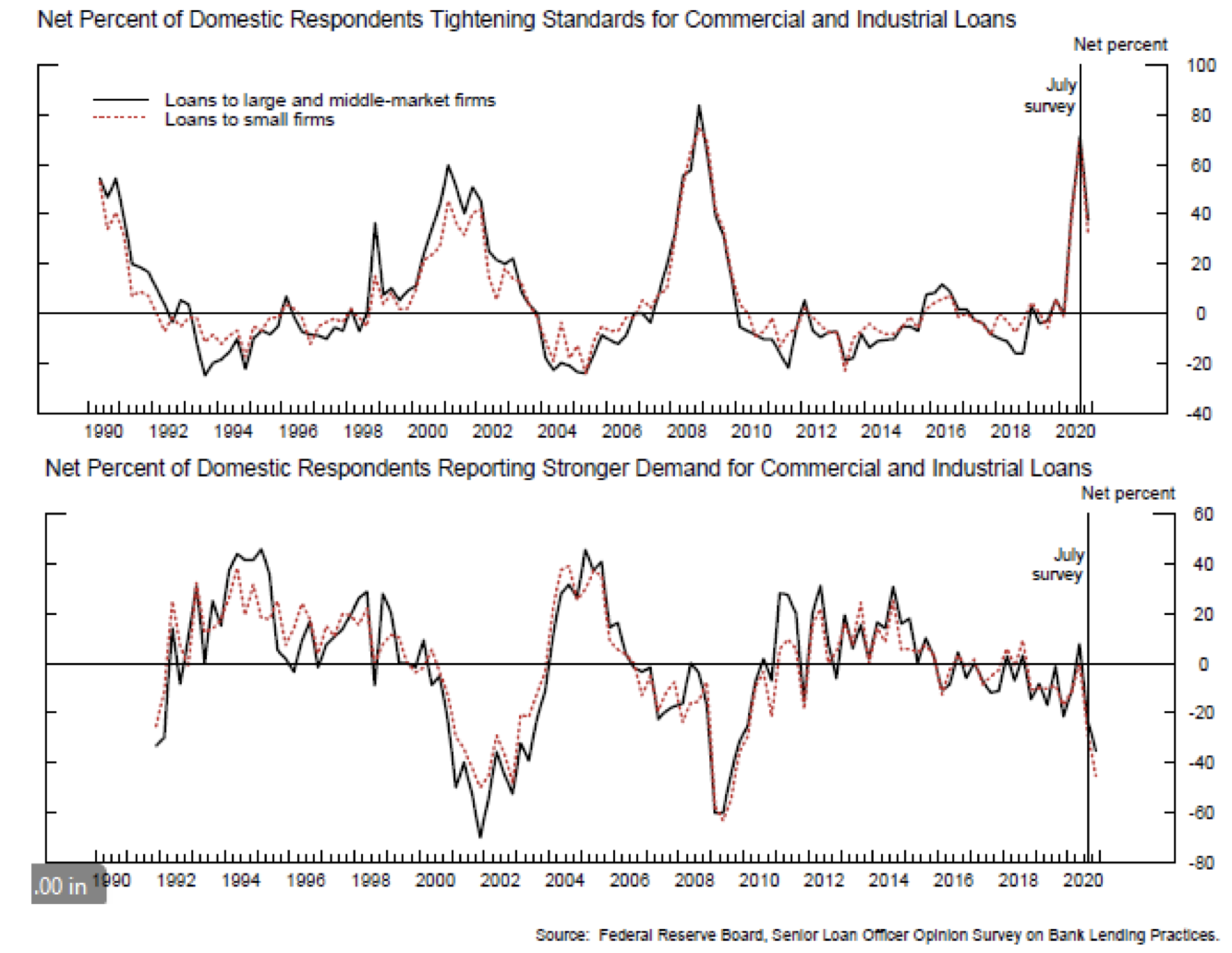 By contrast, the survey shows that although banks are still stingy, they are relatively happier to lend to private individuals (20% tightening standards for mortgages, versus about 40% for company loans). While the pandemic has undoubtedly taken a toll on many (younger) people’s financial positions, those with secure employment have been able to grow their savings during the crisis – and are looking like a much better bet for banks. 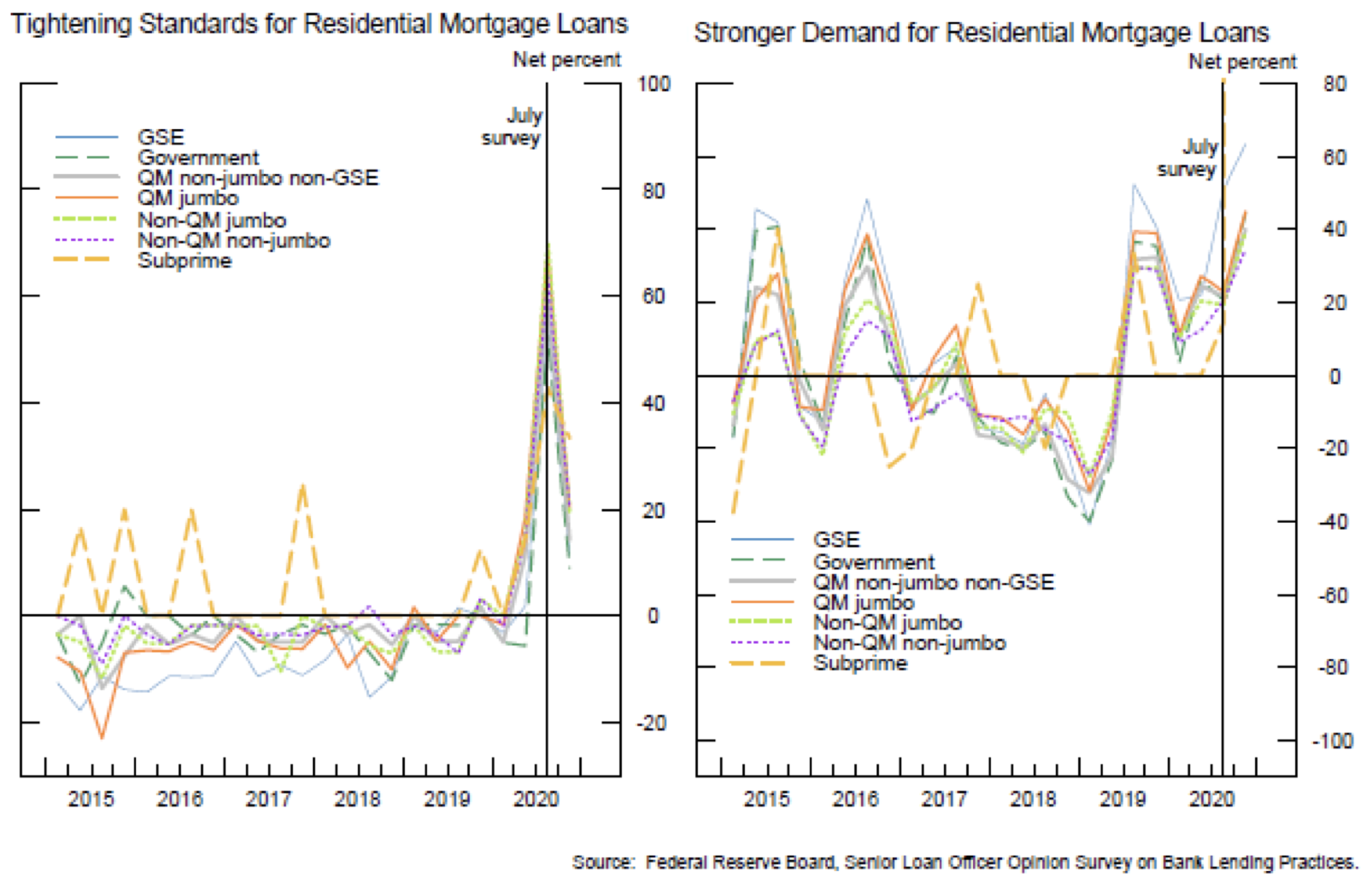 The same seems to be happening in the UK, also helped by regulatory changes, such as the suspension of Stamp Duty. Housing market data were strong immediately after the end of the Spring lockdown, and has (somewhat surprisingly) remained so. Sales and prices have been trending up in recent months, despite the huge downturn in wider economic activity. According to the latest Royal Institute of Chartered Surveyors (RICS) survey, October was another strong month, with a net balance of +46% respondents reporting an increase in demand. With house sales continuing throughout the second lockdown, estate agents expect this upturn to continue.

Disparity in house prices has been a growing feature of the UK market for decades – as is evident from comparing how far your money will go in central London versus less connected regions. But with businesses no longer requiring workers to be in the office – or at least not all the time, buyers are now showing a preference for space over connectedness. This has caused a sharp increase in demand for hitherto relatively lower-valued housing stock. As shown in the chart below, the biggest price increases are coming from Yorkshire, the Humber and the North-East. We are observing the same in the US, where the urbanisation trend is now in a period of reversal. Even if virus concerns start to fade into next year, it is likely that the changed attitudes to ‘WFH’ will carry on into the post-pandemic years, and as such we should expect further demand in the comparatively cheap regions. 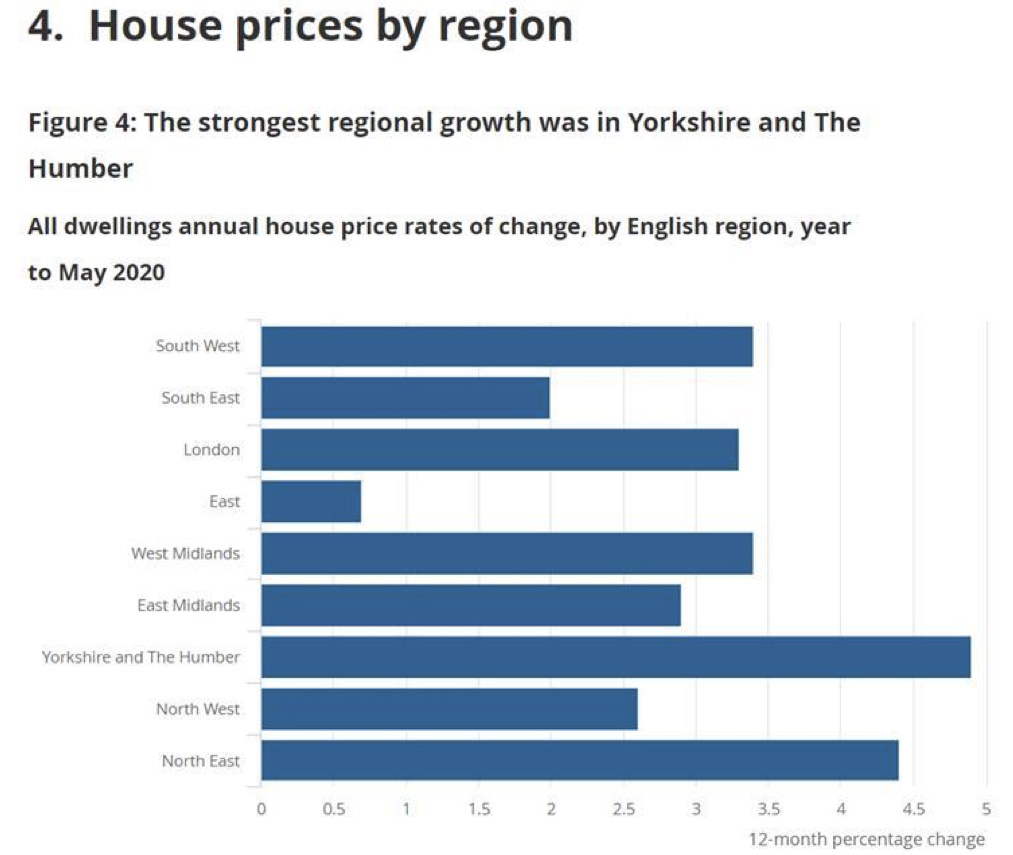 As mentioned, increased housing demand is being substantially helped by historically low interest rates. Rates for long-term mortgages have fallen sharply, but crucially, the premium of an average 30-year mortgage rate over the yield on long-dated (30-year) government debt has come down significantly. This is a signal that low mortgage rates are not just a consequence of monetary policy – but rather that banks are eagerly competing against each other to offer buyers the lowest rate. These dynamics are doing wonders for housing affordability, which in the US is now at its highest since 2014.

However, with increased demand mostly coming in relatively ‘cheap’ housing stock, it is important to note that housing market optimism is in a sense rotational. Not all market segments are joining in the party. With the young and lesser educated having had to shoulder a larger part of the lockdown hardships, while the better off are escaping to the suburbs and countryside, there is downward pressure on rents. As such, buy-to-let purchases – which have been a big component of the UK market for some time – are still under pressure and could be for some time.

The outlook is therefore better for those parts of the market not so reliant on buy-to-let. Hence housebuilding is seeing a boost – as evidenced by the uptick in US lumber prices (a good indicator of housebuilding activity). The encouraging sign is that all of this is happening despite the global economy still being in the midst of its deepest short-term recession ever recorded. If growth does come through next year, we should expect further good times down the line.

As mentioned, this generates positive feedback on the economy itself. In the UK, rising house prices have an outsized effect on consumer confidence through the ‘balance sheet effect’. But beyond this, new housebuilding creates jobs and boosts incomes, while increased mortgage activity – even if only for house moves – is a good sign for the demand for durable goods further down the line. This is something governments will likely want to encourage – particularly if they remain squeamish about stimulating demand through fiscal investment programmes themselves.

These positive trends in housing should further add to the already positive expectation for demand expansion in 2021 and beyond – from the pent-up consumer demand of 2020 and fiscal stimulus programmes that have already been signposted for 2021. This opens up the prospect of a return to higher growth rates not seen in more than a decade. Higher growth will in turn be crucial in reducing the potential drag – and anxiety – caused by increased public debt levels. Of course, higher growth would mean higher tax receipts from the same tax rates – and with GDP rising at a faster pace than the costs of servicing the debt, the debt mountain that COVID has settled us with becomes less daunting. We suspect this is the main reason why central bankers have been willing to ditch past rhetoric in favour of encouraging politicians to borrow more to stimulate the economy. In other words, let’s get out of this recession decisively now – which should lead to higher debt levels being a much smaller worry later.