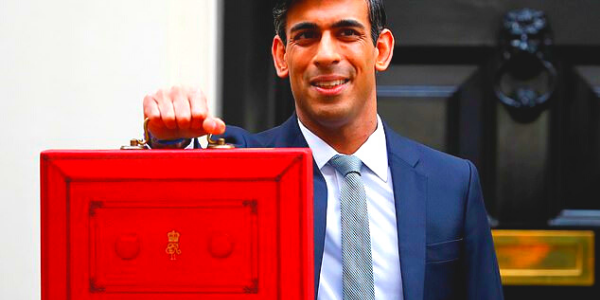 Rishi Sunak’s second Budget Statement was a hotly anticipated affair. After setting out the roadmap to navigate the COVID crisis, the Chancellor was able to mark down the route out of economic crisis. The pandemic has left a black hole in Britain’s public finances and, while vaccines and gently easing restrictions will help get things back on track, there is no doubt that the UK economy still needs a big helping hand from the Treasury. A strong and sustained recovery will not happen miraculously. The good news, then, is that it was a budget full of superlatives.

First up comes spending, with the furlough scheme now set to be phased out in September. The Chancellor has given companies a chance for a “super-deduction” on tax bills, which he claims amounts to the “biggest business tax cut in modern history”. And yet, at the other end, the emergency support measures have left the Government with a forecasted £355 billion in borrowing for 2020-21, the most since the Second World War (the Office for Budget Responsibility published updated forecasts on Budget day). That borrowing pushed Sunak into announcing a (delayed) increase in both personal and corporation tax that will leave Britain with its highest tax burden since the 1960s. 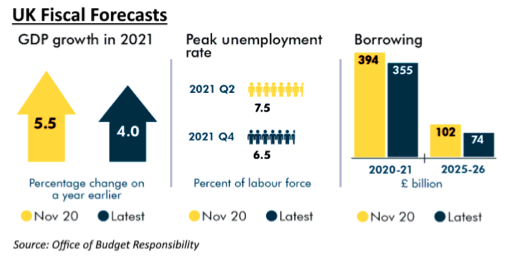 Let’s take these in turn. With the immediate priority of extending emergency support, the Government will continue to foot 80% of companies’ wage bills, extend the extra Universal Credit of £20 a week and also the stamp duty holiday on properties under £500,000. These amount to an extra £40 billion in spending above previous expectations, bringing the Government’s total pandemic spending to £344 billion. That translates to around 16% of GDP, well above the current 13.3% COVID-induced average for advanced economies.

The Budget was about much more than plugging the gap between now and normality, though. Eight new freeports will be built in the English regions, while a new infrastructure bank in Leeds will be given £12 billion to invest. These measures are a good sign, but as a long-term spending package, it falls some way short of the comprehensive fiscal plans being discussed elsewhere, such as the US.

One thing clear from the Budget is that the Chancellor expects much of the economic (and tax revenue) recovery to come from the private sector. The Treasury’s planned super-deduction for businesses is designed to aid this. For the next two years, companies will be able to deduct 130% of the value of physical capital investments from their tax bill. The tax relief applies to spending on “plant and machinery”, and should give businesses an extra £25 billion toward new production. While the overall tax rate will rise in 2023, in 2022 many companies could see their short-term tax bills fall by a quarter, as the Government effectively subsidises a wave of capital spending.

So, the incentive to frontload business investment over the next two years will be high, meaning that capex in Britain should pick up almost immediately. This will be a boon for the wider economy, the primary beneficiaries being capital-intensive businesses, such as manufacturers or utilities companies, with secondary beneficiaries being companies and workers in the construction industry. To put it another way, the Chancellor has chosen to target the support where the multiplier (spill-over effect) for wider economic activity is highest.

While it might seem unfair, because there is (probably) a lower multiplier, there are no equivalent investment boosts for Britain’s struggling services sector. The hope here is that the rapid vaccination programme will be enough of a stimulus on its own to help out service providers.

The Chancellor’s supposed “biggest business tax cut in modern history” is all the more significant for what comes after it. Two years down the line, the bill comes due for businesses, with plans to raise corporation tax from 19% to 25%. Sunak was keen to stress that this would still leave the UK with the lowest corporation tax rate in the G7, but when adjusted for allowances and deductions it leaves British businesses with a heavier tax burden than most advanced economies (the Inland Revenue is better at its job of collection than most other countries’ tax collectors). The 6% hike is more than business leaders had been expecting, equivalent to £17 billion extra a year by 2025.

Economically speaking, signalling a tightening of fiscal policy has the potential to harm confidence and endanger a fragile recovery. So, the rationale for the announcement was more political than economic. The Chancellor needed to calm those in his own party worried about a heavy government debt burden. Realistically, with global yields still at historic lows, debt sustainability is not a current issue. But the Budget sent the message that the Tory Party is still the party of balanced budgets, and will continue to be once the pandemic is over. In 2018, the Government expected a stable debt-to-GDP ratio; in 2021, it still expects a stable debt-to-GDP ratio. All that has changed is that in 2018, it was 72%, whereas now it is 98%.

This Budget – with headline tax hikes for corporates – marks a big break from previous Conservative policy. The pandemic has only increased the sense among the public that tax-shy corporations have been the big winners while everyone else is falling further behind.

There has been some media criticism over how Sunak’s announcement will affect Britain’s ability to attract business investment – with fears that companies may hop over the Irish Sea for more favourable rates. This is particularly apparent given the effects of Brexit, and the previous promises on becoming more business-friendly. But the UK is far from the only country planning to raise corporation tax. The new US administration is planning a tax hike of its own – above Sunak’s proposed rate – while talk of a financial transaction tax is ongoing in the European Union. When governments compete with each other over the most attractive tax rates, businesses are the big beneficiaries. But we are now seeing a global movement toward heavier corporate tax, leaving international companies with nowhere to hide. The Chancellor said as much himself, using the proposed tax hike in the US as justification for his own.

So, Sunak needed more revenue and, as a good global citizen, had to go with the flow in taxing companies. But, in our opinion, he is very likely to limit corporate taxation from rising further. His party will be hoping the fixed personal allowances will mean substantially better revenues derived from a motoring economy. Hidden in the detail of the Budget, constraints on public spending and the attempt to hold NHS pay rises to 1% also suggests that, in the future, faced with decisions between tax and spend, we are more likely to experience spending cuts rather than higher taxes.

Taking a step back, the Chancellor began his Budget Statement with an impossible task – continue to support all those who are badly affected by pandemic restrictions until they end, but without letting the budget deficit get out of hand, or raising taxes for the broader electorate, and without mentioning any return to austerity. What Sunak chose to do was all the above, but with different time settings, while gambling on a massive economic bounce-back – and outsized increases in tax revenues – that will allow him to outgrow the budget deficit question. Sunak’s second Budget was many things, but our overriding sense is that it was both politically astute and an innovative break from past Conservative policy.