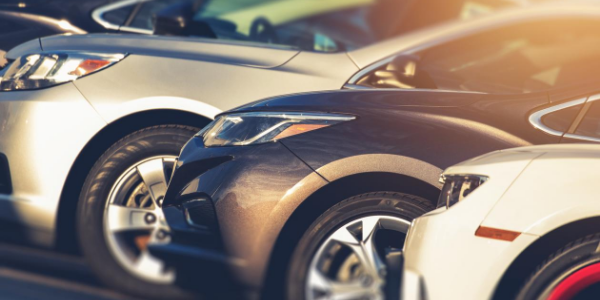 Like most industries, the automotive sector has been hit hard by the pandemic. Carmakers were already struggling well before the first COVID case came in, with changes to emissions regulations, a global manufacturing downturn and structural shifts in demand providing fierce headwinds. A global economic shutdown then came at the worst time it could, as stay-at-home orders and evaporating incomes choked off any hopes of a quick turnaround in fortunes. Data from the world’s seven largest car markets showed new auto sales were down 21% year-on-year in June, with the US and Europe registering sales numbers of -26.4% and -24.4% respectively.

In normal times, these figures would be enough to make carmakers weep. But the latest data in fact show signs of recovery. The nosedive in sales numbers hit its floor in April, registering a yearon-year fall of more than 40% across the major markets, and since then there has been palpable improvement – with the latest figures even positively surprising analysts. Goldman Sachs data for the US shows seasonally-adjusted light vehicle sales improved 11% in July (though the raw yearon-year figures still showed a 12% decline), and key European markets like France and Spain are into positive outright growth figures (+4% and +1% respectively).

China, the biggest market for autos, has bounced hard. Seasonally adjusted, July sales were running at +17% year-on-year, and while pent-up demand may decrease in the next few months, this represents a significant improvement. The chart below shows the actual unit numbers:

In the US and Europe, the sales trajectory undoubtedly looks positive. With lockdowns continually easing – and virtually non-existent in some areas – economic activity has picked up markedly from its lows, causing a general rebound in demand which is buoying car companies. Much of that demand was pent-up through the lockdown months and is now being released in waves. And, at the same time, governments – particularly in Europe – are using a number of measures to incentivise purchases.

The pandemic curbed car sales early on, it now looks like autos are getting a COVID boost. With the public now discouraged from using public transport – through government mandate or personal safety concerns – driving is the main option. We can see this in the data on second-hand car sales. In areas with extensive public transport systems, sales have shot up, while in places without, sales have mostly flatlined or declined. This also ties in with a theme we have written about a great deal lately: how COVID containment measures have led to a shift away from densely populated cities.

Residential prices are rising outside cities – and falling inside cities – in a number of countries. New York and London seem particularly affected. It may last for some time given that many office based businesses have discovered that remote working can be more productive for both employees and employer 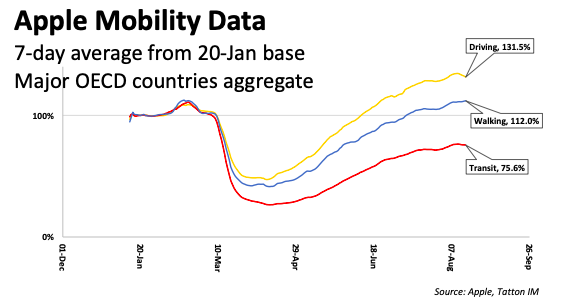 Even so, at least in its current form, this pandemic will not be around forever – and some of the above factors may be temporary. This is certainly true for pent-up demand and government induced purchases, which will likely dry up sooner rather than later. If the public eventually climbs back on board city trains and buses, demand for cars may come down. Of course, when the positive demand effects of the pandemic wear off, the negative effects – social restrictions or depressed incomes – are likely to wear off too, which will help the situation overall.

The bigger challenges for the industry will still come from environmental concerns. Since the beginning of the year, new European Union regulations have required producers to drastically limit the average CO2 output of their cars – translating into a 21% reduction in emissions from their 2018 figures. If they are unable to, the industry could potentially lose around €33 billion a year in fines – with European pursuing green policies unphased by COVID pressures.

To meet the new rules, carmakers have predictably been turning to either full electric vehicles or hybrids. Varied and uneven incentive policies across Europe, as well as consumer reaction, have hampered widespread adoption (with battery-powered electric cars making up just 1.7% of European sales in October 2019). But many car companies planned to make 2020 the year they push hard into electric. COVID has unsurprisingly spoiled those plans, and so carmakers have turned to purchasing US emissions credits from Tesla.

This, combined with the company’s high-tech focus, is one of the reasons why Tesla is one of the few car companies whose share price has fared well through the pandemic. In fact, Tesla’s run of four quarters of profit (which makes it eligible for the S&P500) has come from Carbon Tax Credit sales. This year’s Q2 generated $428 million in regulatory (Carbon Tax credit) sales, pushing it into profit of $104 million. Tesla’s buyers included General Motors and Fiat Chrysler.

As the chart below shows, Tesla has only a small share of the European car market, and yet has become the biggest carmaker in the world by market cap. Tesla design its own software, hardware and batteries – and seem willing to provide this to other electric carmakers. As such, even if the company fails to gain a big share of the market any time sooner, investors are confident it will still take a healthy chunk of the profits when the electric market takes off. 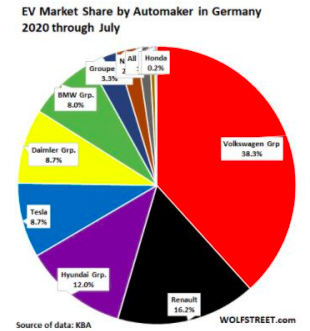 However, it is possible that the pandemic experience could dissuade producers from relying on external providers for parts. We have already heard reports that, due to supply chain disruption from COVID, manufacturers have been unable to get production running, leaving the car market in undersupply. Even when things return to something like normal, companies might want to produce much more inhouse to avoid a repeat of those problems. What exactly that will mean for the autos sector – and the future of electric vehicles in particular – is hard to say. For now, carmakers are seeing a welcome rebound. But given their recent experience, they will be wary of how long it can go on for.