Canary in the oil well? 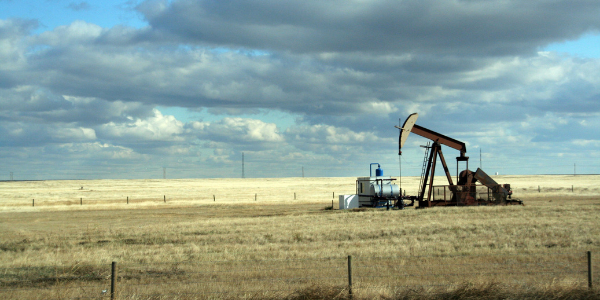 Back in February, tumbling oil prices were a harbinger of things to come. It became clear the world was heading for a crisis – one that would eventually force governments to shutter their economies and plunge the global economy into its deepest-ever recession on record. The economic ice age to come would severely hamper oil demand – often considered a proxy for global economic activity.

But demand issues were only one side of the story. OPEC+ members (Russia being the leading non-OPEC player) used this moment to break their accord on oil production. Crude oil supply flooded the market just as demand was drying up, causing an almighty drop in prices.

The strategy was rumoured to be an attempt at stopping the surge in US domestic oil production. As we wrote back then, shale oil drilling in the US (and Canada) had surged in the aftermath of the global financial crisis. In 2009, oil prices shot from $40 per barrel to $80 per barrel while the cost of borrowing was low for US oil companies. Shale drilling became immensely profitable overnight. 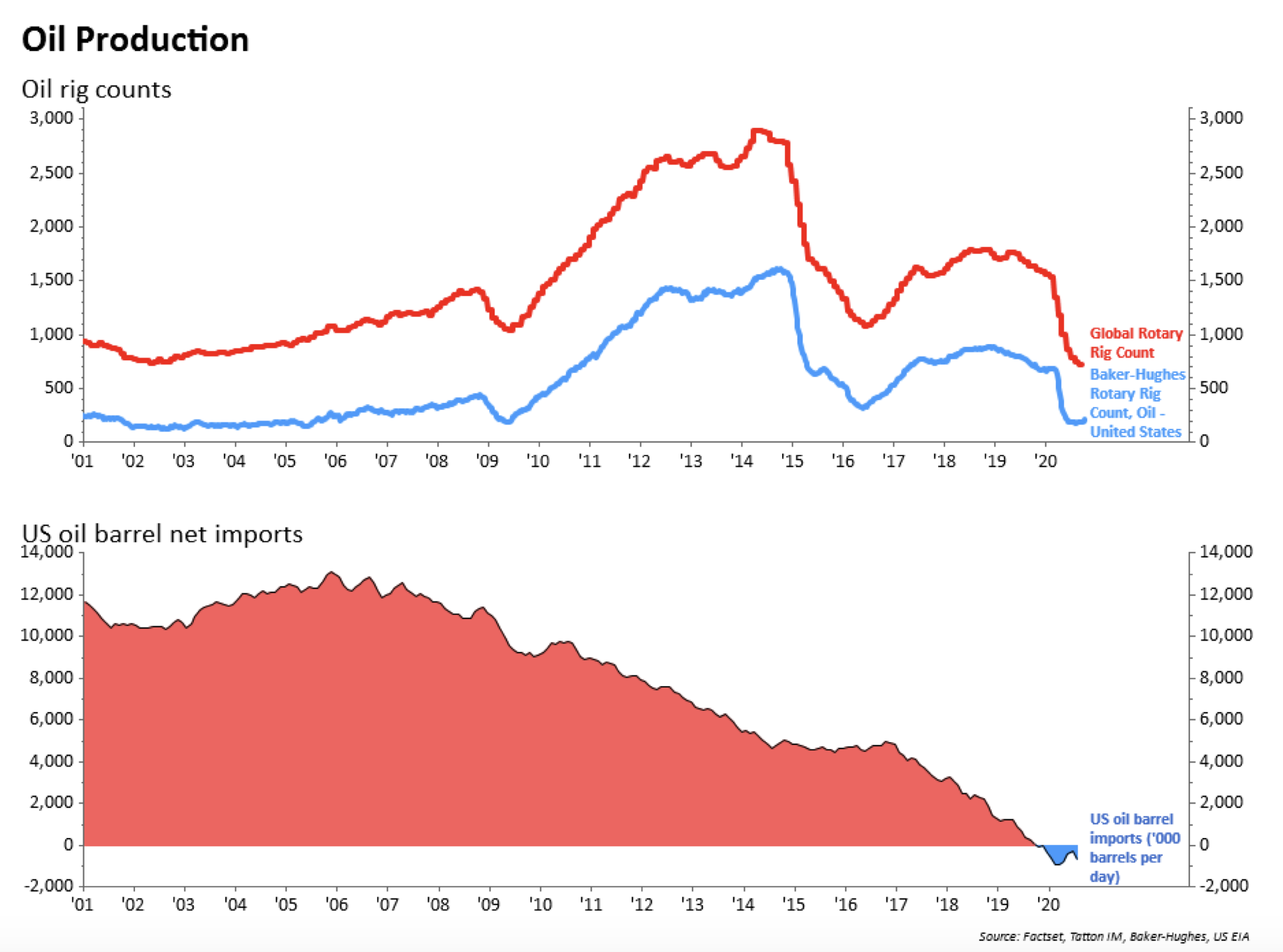 As the above charts show, the process changed the balance and dependencies in the global oil market fundamentally. It pivoted the oil (and metals) exporting nations towards China and away from their historic dependency on the US. By the beginning of this year, the US was exporting oil.

But the US oil rigs were heavily financially leveraged, with the breakeven price of most (at the time) probably above $50 per barrel. So, the members of OPEC+ were given a helping hand by the spring lockdown. If they couldn’t avoid the demand collapse, perhaps they could use it to remove the competition. The culmination of this came in April, when Brent Crude prices hit a low of under $20 and WTI (the US equivalent benchmark) saw its most incredible price event in history. Spot prices turned negative, with oil traders willing to pay $37 per barrel to have contracts taken off theirhands (so they didn’t have to take physical delivery with nowhere to store it).

However, the side-effect on equity markets was equally huge. Investors were already spooked at the prospect of a global economic shutdown. This probably created a feedback-loop which exacerbated the nosedive in oil prices. Producers soon agreed immense production cuts to stabilise prices. Since June, spot prices for both Brent and WTI have hovered around the $40 per barrel mark, aided by the summer thaw in global economic activity. As the chart below shows, OPEC countries have even been able to increase production while maintaining a steady price level. Meanwhile, US producers have not reinstated lost rigs – the costs (especially debt costs) have been way too high. 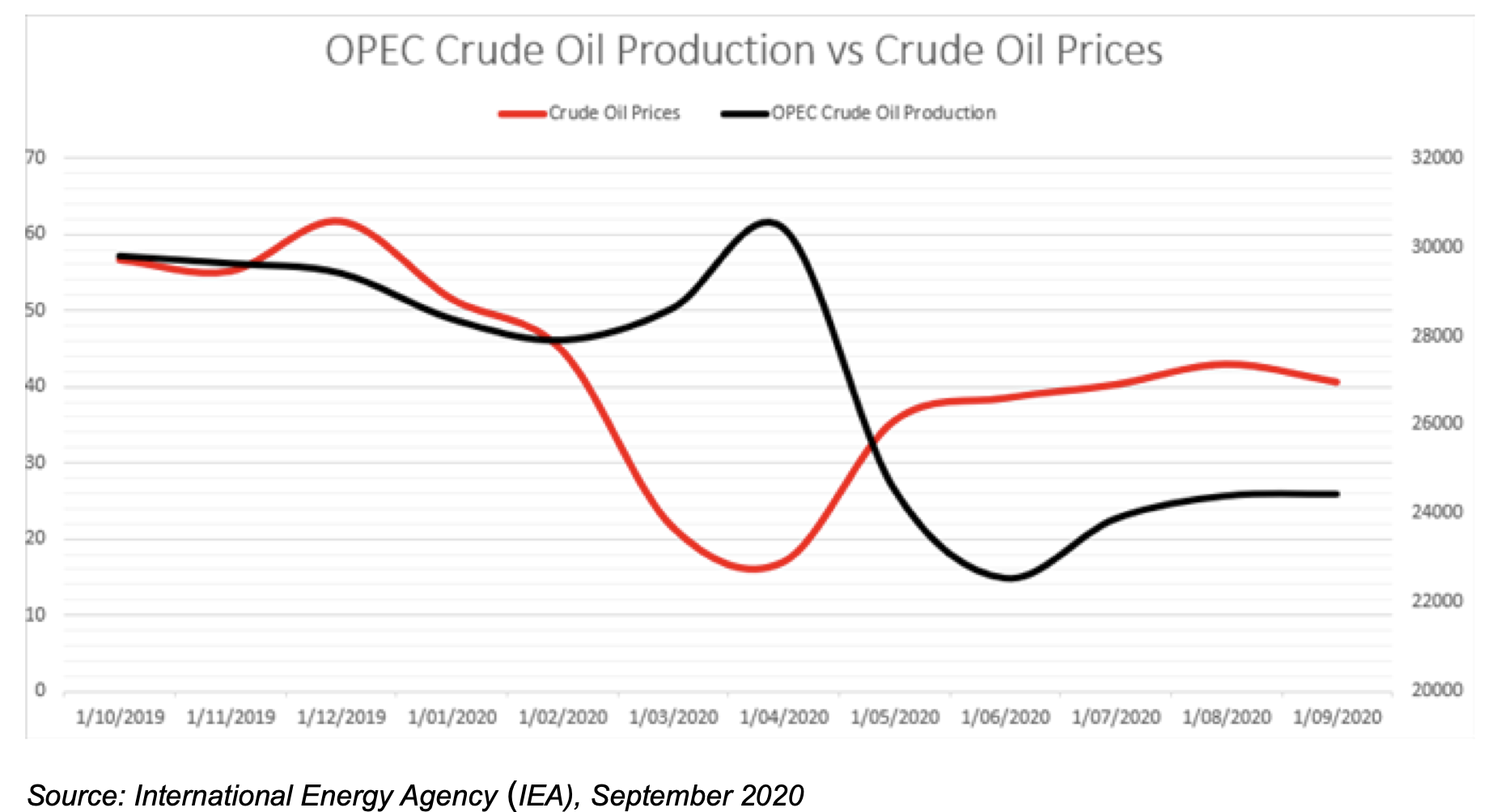 With a reduction in global oil production capacity, one might have expected reasonable pricing power. The complication now is that, just like earlier in the year, rising virus cases across much of the western world are forcing governments to shut down activity once more. The International Energy Agency (IEA) has warned that tightening restrictions point to a fragile outlook for crude oil prices. We are already seeing this in oil-related products like distillates (including diesel and types of heating oil), where weak demand from increased lockdown measures in Europe has caused a fall in demand. Unsold distillate inventories are now high, which is feeding through into a backup in crude inventories.

What is more, while producers have endeavoured to cut supply throughout the second half of the year, issues remain. A reduction in land-stored crude oil of four million barrels is expected in the fourth quarter of 2020 according to the IEA, but the organisation stresses that this “is happening from record levels”.

OPEC+ is set to meet next month to discuss future production policies. Under the current agreement, the production ceiling is set to increase by 1.9 million barrels per day at the beginning of 2021. But “there is only limited headroom for the market to absorb extra supply in the next few months” according to the IEA. If oil producers can agree to retain production curbs at the meeting, prices should be stable, and any falls less dramatic than in March. On Thursday, Russia (the main architect of the collapse) suggested a continuation of curbs. Still, they surprised the rest of OPEC+ in the spring, and that experience might caution against being confident of an agreement.

Oil could once again prove to be the proverbial canary in the coalmine for the global economy and capital markets. A repeat of oil price volatility could have an outsized impact on markets yet again, particularly given the importance of oil-related investors (the oil nations sovereign wealth funds) to the global financial system.

Being aware of the risk does not mean financial markets will suffer. The onset of the pandemic across the western world came just as we entered spring, when energy for heating naturally was dropping and when – in a normal year – travel and industrial activity should have become the main components of oil demand. Now that we are heading into winter, heating oils for homes and workplaces will naturally be in high demand, even if other economic activity drops off.

The overall global economic outlook is also different. The second wave of COVID has brought back a great deal of uncertainty for businesses and consumers, but we now know much more about the virus and how to combat it (both medically and socially) than back in March. There are significant economic positives on the horizon too, with vaccine development now looking a certainty for early next year at the latest, and continued fiscal and momentary support from authorities. Markets have certainly taken these positives on board and seem to be expecting 2021 to be a stellar year for growth – admittedly from extremely low levels in absolute terms. But even if you do not buy into the growth story, no one seriously expects next year to be as bad for growth as this one.

Much of the outlook for oil therefore depends on how much of a recovery you expect for 2021. And that leads on to a point often made (but seldom acknowledged) about oil prices: Even if short-term expectations cause market-damaging falls in oil, this is not necessarily a negative for the economy. Indeed, part of the growth outlook for next year is based on the idea of a cyclical rebound. A low oil price could well be a big positive for this cyclical story, with manufacturers and consumers benefitting from lower costs.

Overall, a drop in oil prices from current levels – even a dramatic one – is a possibility over the next few months. But outsized effects on the economy and capital markets are much less likely.