Cryptocurrencies: definitely cryptic, but not (yet) a currency? 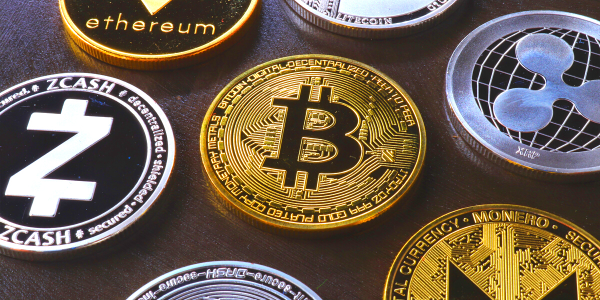 Much of the article that follows was published in the Tatton Weekly in January 2018, when crypto currencies like Bitcoin last hit ‘stratospheric’ levels and generated elation among pundits. Since then, the traded value of Bitcoin fell within a year from around $17,500 to $3,800 (a loss of 78%), only to have staged a comeback over the past 12 months, rising more than 15-fold to around $60,000. After mentioning cryptocurrencies in this week’s video update, we were asked whether we would consider ‘investing’ in cryptocurrencies in Tatton’s investment portfolios. So, it feelsappropriate to re-iterate what we stated during the last crypto hype on the subject matter, if only as a little refresher on what constitutes currencies – and investments.

Regardless of what we outline below, anyone with spare cash is free to bet on the direction of Bitcoin this time around, just as we would not want to pass judgement on anybody betting on their favourite horse in this weekend’s Grand National horserace. Just do not expect to find holdings in such a speculative trading asset in your Tatton investment portfolio anytime soon.

Toward the end of the first quarter of 2021, Bitcoin once again became one of the welcome distractions among lockdown-fatigued market traders and technology afficionados. The hyperbolic increase in the valuation of Bitcoin over the past 12 months had people wondering whether they were ‘missing out’ on something, and (only) secondly, people began returning to the merits of Bitcoin and other so-called cryptocurrencies.

It still seems that cryptocurrencies are not widely understood. This is perhaps to be expected. The term would appear to relate not only to the fact that Bitcoin (and others) are not conventional currencies, but also to the arcane processes underlying the ‘production’, exchange and valuation of cryptocurrencies.

To understand and assess Bitcoin (and others), it needs to be considered relative to conventional currencies. So, let us start with the concept of money more generally (and its primary functions). Money can be any accepted means of payment for goods, or the settlement of a debt; it is primarily a medium of exchange. Absent such a medium of exchange, there would simply be a barter style economy, trading one type of good for another (which is of course hugely resource and transaction- documentation intensive).

Money and currencies also provide for a unit of account (enabling price levels to be determined and accounts to be maintained), and represents an effective store of value (to the extent that it can be used to make purchases, or retained for future transactions). Clearly, there may also be other means of storing value (property, antiques, and other assets), and money as store of value can be impacted by many things, not least inflation. Therefore, for money to fulfil the store of value function effectively, its purchasing power must be relatively stable or at least predictable over time.

Historically, most currencies were based on the value of a physical commodity (usually gold or silver) in order to insure the stability of its value. However, over time, countries and governments developed and implemented the use of so-called fiat currencies. Fiat money is currency that a government has declared to be legal tender, but is not based in the value or quantity of a physical commodity (like gold or silver). This became necessary when economic growth outpaced the growth of available gold and silver, which would have led to persistent deflation if the money in circulation is fixed, but the volume required by an expanding economy increases steadily. Deflation, as we experienced in the aftermath of the global financial crisis, needs to be avoided at all costs, as it has proven to discourage consumption in the present for the expectation of lower future prices, which leads to economic depression.

The value of fiat money is essentially derived from the relationship between supply of money and its demand, as determined by the size of an economy and the effectiveness of its deployment, which itself is a function of the efficiency of the country’s respective finance system. The value is determined by government macroeconomic policy, central bank policy and the dynamic of the respective economy to other economies of other counties, but not the value of the material from which the money is constructed (most recently in the UK, plastic polymers).

Importantly, because fiat money is not a scarce or fixed resource (like gold), governments and central banks control the supply (production) of money, and have control over key variables likely to influence its demand – supply balance (e.g., interest rates).

How did Bitcoin come into being? It emerged as a libertarian response to central and government control of money, and in response to the global financial crisis, as well as from alleged short- comings of the traditional banking and reserve system.

Bitcoin is not, however, a fiat currency, but neither is it a commodity-backed form of currency. Instead, it is a digital currency, created and stored electronically. No single entity (government, authority, or otherwise) controls its production, supply or value. Moreover, Bitcoins are not printed, like sterling and dollars. They are ‘mined’ by people and, increasingly, businesses, running computer software. In simple terms, it is a virtual currency and a decentralised payments network – a global peer-to-peer network, composed of thousands of users, which serves as an intermediary (like PayPal, Visa etc.). Bitcoin holders and merchants can transact without these and other third party intermediaries.

As long as such a means of exchange of value fulfils those basic and defining principles of money, in particular, relative stability (or at least predictability of value) in relation to physical goods and services, as well as omni-availability and transparency, then arguably it doesn’t really matter much whether such a currency carries features like real asset backing or economy backing and government framework.

Unfortunately, it is these basic requirements of an effective currency which cryptocurrencies completely fail to fulfil. The value of a crypto ‘currency’ is not derived from gold or government fiat, but just from the value that people (and markets) assign to it. The US$-dollar value of a Bitcoin is determined on an open market, entirely on the basis how much (or how little) holders of traditional currency desire to hold of the cryptocurrency. As noted, Bitcoin valuation has accelerated 98% since the start of 2021, and achieved a massive 925% from March 2020 lows (from £4,102 in March 2020 to £42,059 on April 8, 2021), with value swings of as much 20% in a day. The exact opposite of a stable and predictable store of value. 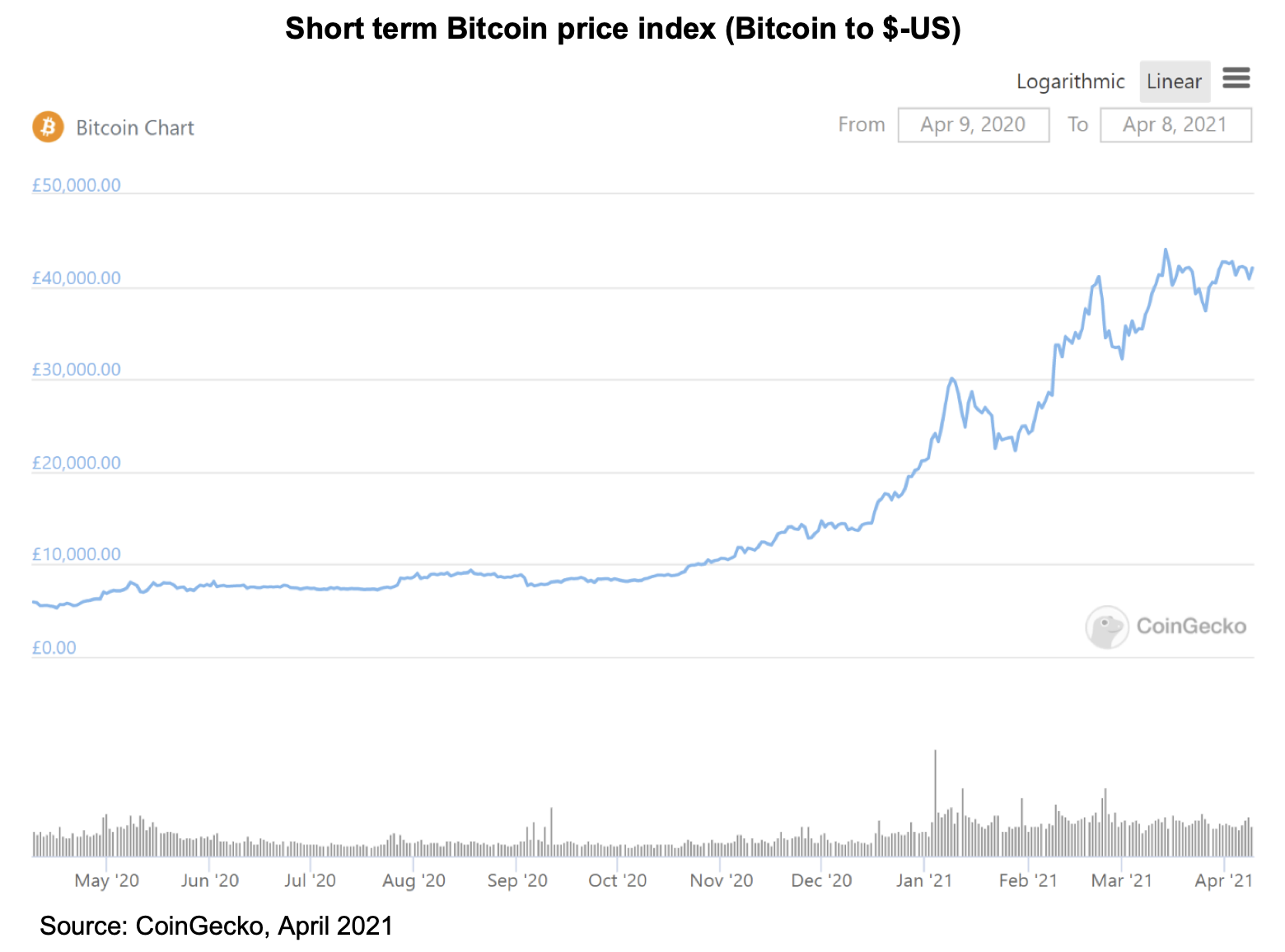 However, the world of virtual currency is not just about Bitcoin. Other cryptocurrencies have also risen dramatically this year, including Ethereum, Ripple, Litecoin and Dash. Each has different characteristics, allowing users and markets to treat and value each differently. While Bitcoin sees itself as an alternative to fiat currencies, Ethereum is referred to as ‘crypto-fuel’ that is not to be used as a currency. Ripple, meanwhile, is essentially currency exchange software aimed at financial markets.

As shown, Bitcoin (and others) would have to find a way of stabilising their ongoing value and achieve a wide acceptance for transactions before they can be considered as fulfilling that primary and core function of money.

For now, the Blockchain technology that was developed alongside the cryptocurrencies for their account keeping in the form of highly transparent, decentralised digital ledgers, which currently represents the most tangible value of the entire cryptocurrency movement. Its advantages can be applied to any transaction recording, be they monetary (including traditional currencies), intellectual property rights (copyright management) or real assets (land registries). Due to its open code nature (the concept itself is not protected through property rights), holders of cryptocurrencies do not acquire a stake in this potentially quite valuable technology.

It can be reasonably assumed that the recent accelerated increase in valuations did stem from a healthy mix of speculation and perhaps FOMO (fear of missing out) and not a widespread adoption of the libertarian money concept it was first conceived as. With nothing except the potentially very fleeting interest of human beings – motivated by greed rather than the desire to create a truly libertarian currency alternative – determining the intrinsic value and direction of travel of cryptocurrencies must, by definition, be random. However, if the historical observation of speculation and manias is a more suitable approach to explaining recent Bitcoin movements, then we can predict with some certainty that the long-term value of Bitcoins will be zero.