Earnings season round-up: plenty for markets to mull over 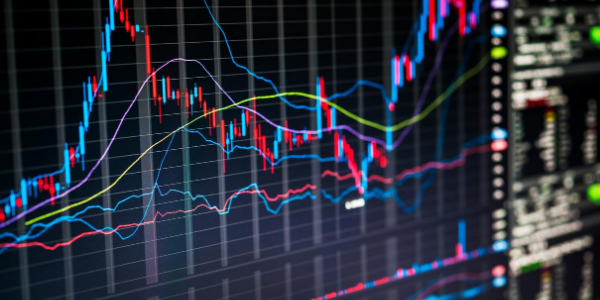 Although stock prices have come down recently, the ratio of price to earnings remains high enough to make investors squeamish. As such, eyes are now turning to the recent slew of earnings reports from the second quarter. Q2 was, of course, dominated by virus news, global lockdowns and a record slump in economic activity. And even though these figures can only tell us where we have been rather than where we are headed, now that we have passed the halfway point of the earnings season, it is worth taking stock – especially now that the megacaps, which have largely been propping up the rest of Wall Street, have published their ‘beating’ earnings reports.

All regions have been hit economically by the global pandemic, but not equally so. In Europe, sales figures disappointed analyst expectations, but actual earnings posted a positive surprise. We should distinguish between the ‘surprise’ figures on earnings and the actual earnings growth figures themselves. As we have written before, companies have come to learn that surpassing expectations often wins you a bump in stock price – and so consistently post overly-pessimistic forecasts only to clear the low bar later on. Sure enough, overall European equity earnings came in just over 17% above analyst forecasts, but this was still a 15% fall from a year earlier. Likewise, European company sales were 5% below the expected figure, but 26% down from the same period in 2019. And to make a point that macro and micro can match: eurozone GDP (real) also contracted by 15% year-on-year.

Earnings releases give us an early insight into sector performance, while earnings surprises give us an idea of where perceived wisdom in resilience or suffering from the virus fallout may have been a bit misguided (positive and negative). One of the big disappointments for Europe, for example, was the utilities sector, with sales and earnings figures both well below analyst forecasts. Utilities companies are the stereotypical defensive stock – without much growth potential but faring better through downturns. So, the negative surprise here is interesting; even utilities companies have been hit by the pandemic.

The European financial and IT sectors delivered positive surprises, cementing their status as relative winners from the pandemic (or at least not as big losers). Both sales and earnings came in better than expected – and financials achieved positive overall growth compared with the year before. A great deal of that will have been to do with the turnaround in investment sentiment over the last few months, but banks less exposed to capital markets also showed an aggregate surprise compared to earnings expectations. Make no mistake: earnings growth is (in aggregate) deeply in the red for those banks that were not able to benefit from financial market volatility. But the fact that the sector did not undershoot expectations that, at present, the sector is not at the centre of the economic malaise – as it has been in past crises.

Through the pandemic, Europe’s banks have benefitted from regulatory relief and government intervention in the real economy – in stark contrast to the financial crisis just over a decade ago. For sure, things could turn sour for financials – particularly if and when the ‘second round’ economic troubles kick in. But for now they can take comfort. When looking across the Atlantic, a similar picture is apparent: institutions exposed to capital markets outshone their traditional banking counterparts, whose earnings have halved (slightly worse than in Europe).

Now we turn our attention to the US megacaps. There was some market nervousness that an earnings miss could weigh on already valuation-rich markets, but this has not yet materialised. Microsoft and Apple clearly benefitted from the lockdown trend of turning kitchen tables into home offices, and children’s bedrooms into schools. Facebook was also able to beat expectations, even if its revenues could not match last year’s level. Google (Alphabet) recorded slightly negative (to flat) revenue growth as advertisers tightened their belts (so here a megacap took a hit from the real economy), but this was to a certain extent expected. The big overachiever was Amazon, which beat expectations and its own previous results. Some of this is lockdown-related, as with the tech sector, but retail is also clearly undergoing a structural shift away from the high street.

We often underline that while the megacaps are different in terms of the business they operate in – technical innovation versus retail disruption – they have one theme in common: regulators have an eye on them in terms of market dominance and their impact on healthy competition. Although it was noteworthy that Microsoft was not invited to this week’s Congressional hearing. Nevertheless, investors will be keeping an eye on the US elections, and the future governmentmandated rule changes intended for megacaps.

Overall, the picture emerging from this earnings season is that things are bad, but perhaps not as bad as expected. Clearly, consumer spending has been compressed throughout the global lockdown, but people still need to eat, drink and buy televisions. Looking forward, one of the most important considerations is, of course, the expectations for future earnings – the Q2 season is by definition a thing of the past. The chart below shows that 12 months ahead expectations have started to recover. Again, to a certain extent, this is natural, as people are positive that the global community is going to be able to deal with the COVID-19 outbreak as we move through 2021. This increase in earnings expectations has also allowed P/E ratios to stabilise.

But this also means that any unexpected slowing of activity (perhaps from a perceived setback in vaccine development or a wave of bankruptcies) could have a significant impact on the earnings that one is able to discount into today’s stock price.

But so much can – and will – happen between now and 12 months’ time. For now, markets will have to content themselves with keeping track of coronavirus statistics, second-guessing fiscal and monetary policy, and keeping an eye on the US election now less than 100 days away. 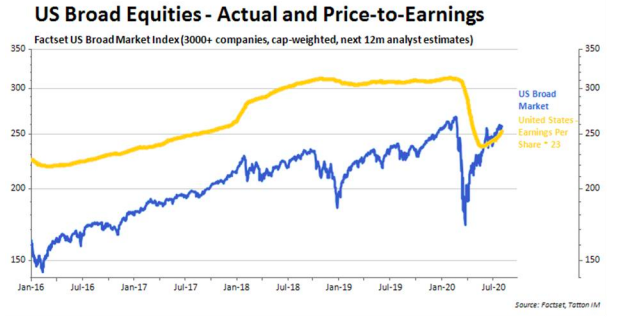 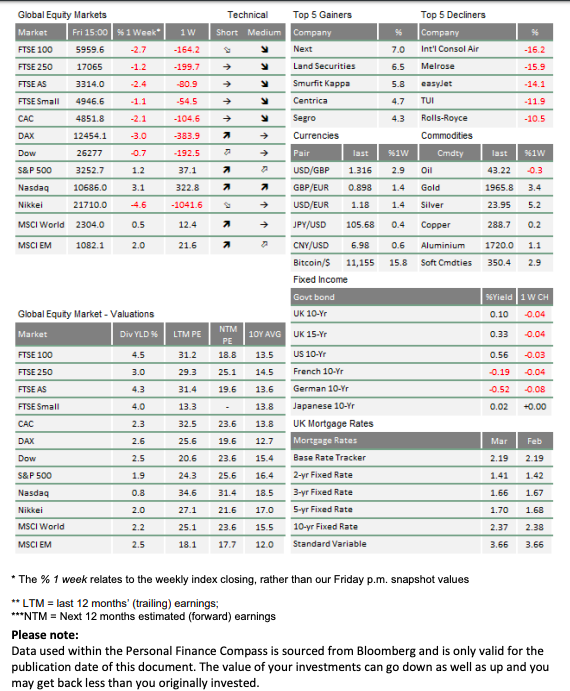