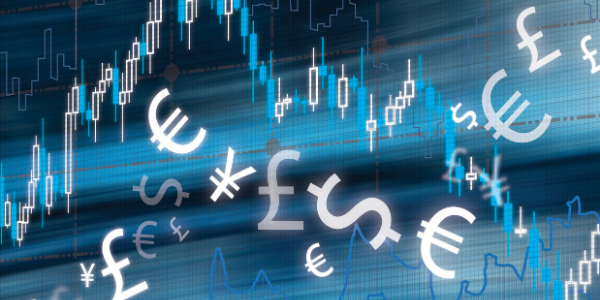 September has ended what now feels like a ‘goldilocks’ summer for investors, and political, societal and capital market frictions have returned to the stage with a bang. However, the fact that stock markets have not simply plunged on bad news, but have instead remained surprisingly stable, is a good indication that economic and market dynamics are not quite as simple as they may appear. Following a summer of hopeful yet gradual recovery the second wave of Covid has not prompted a sudden return to depression and decline. The reason for this is most likely that there is a general feeling that we have indeed learned to cope with the virus, even if we have to accept that things will not return to our old normal for some time yet.

Starting with stock market action over the past week, market strategists, who for much of August struggled to make sense of the upward surge in the top US tech stocks, appeared to have found the culprit and cause. Enter Softbank, a Japanese technology investment house that suffered substantial losses over its hapless backing of 2019 tech darling WeWork. Softbank appears to have spurred markets and whipped-up the recent froth through large derivative positions in tech stocks – with the aim of winning back of what had been lost. But while humans have a tendency to embrace the straightforward explanations over the more comprehensive ones, reality tends to be multi-factored rather than mono-causal.

It would seem that Softbank’s speculative investments was one element, but as is often the case, sharp market moves are based on a coincidence with other factors: some reports point to perhaps millions of small US retail investors who (in their boredom of COVID activity constraints) had put some of their government support windfall cash to work – and this not only through straight forward cash equity investments but also options, i.e. geared. Now that the US government has halved its generous support payments to $300 per week, many are starting to worry whether they will indeed be returning to gainful employment as quickly as first expected. As a result, this massive burst of incremental investment liquidity is disappearing – and with it some of the unhealthy exuberance built up in US tech stocks. Given the wider monetary and fiscal support spectre that was behind the swift market recovery in Q2, it is perhaps not surprising that the stock markets at large have held up rather better.

Staying with capital markets, but turning towards the virus-driven expectation set, it would appear that recovered levels are perhaps not just all dependent on the combination of near-term vaccine hopes and central bank liquidity injections. Back in May, we would have expected AstraZeneca’s halting of their vaccine trial – on the back of an unexplained but serious neurological inflammation that one of their patients suffered – to send stock markets into free-fall. That it did not happen this week might well have to do with the observation that Europe’s relapse in infection rates back to April’s levels appears to have astonishingly little impact on public health when compared with the first wave (see chart below). 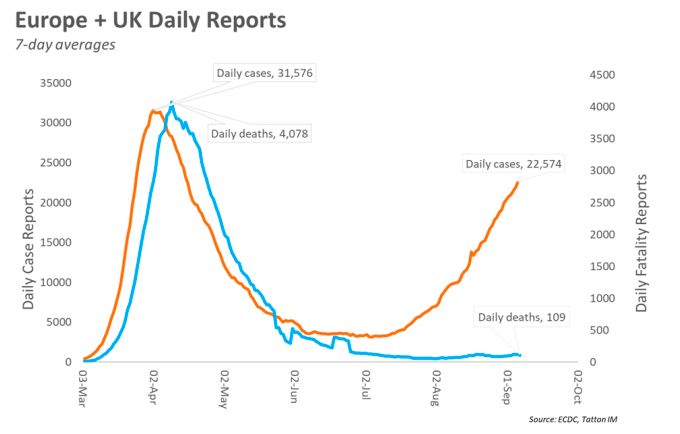 It is too early to conclude that the virus has ‘burnt itself out’ and will gradually disappear as a threat. The very different paths of the graph above could have a number of explanations, not all of them encouraging. Nevertheless, the slightly contradictory market reaction seems to indicate that markets no longer assume the second wave will hold back the economic recovery enough to derail expectations of a rebound of longer-term earnings growth.

Many will have – like us at Tatton – registered with dismay that the UK government found it necessary to restrict our range of social interactions once again. As we wrote last week, any return of higher levels of activity restriction and fear are going to increase the damage for the economy. On reflection, it may be a necessary – but hopefully only temporary – step to reiterate the public health message that this epidemic is not yet over and stress the importance that people limit the spread of the virus until a more permanent solution becomes available. Despite qualifications over the flattening of the public health impact curve mentioned above, it is possible that if the trend nevertheless continues for another month, activity restrictions may become unenforceable and indeed less called for – even before a vaccine can be deployed for the vulnerable and elderly. In the meantime, governments may be faced with increasing frictions between the frustrated and less-affected young and the more vulnerable (ruling) old.

Given these virus-related political pressures, it is unclear why the UK’s government chose this week to further increase political stresses by announcing their planned breach of the European Union Withdrawal Agreement. The decision has only served to undermine the nation’s standing as a contractual counterparty in the international political arena in an unprecedented way. It appears most likely to be a combination of political actors lacking relative experience paired with a certain gung-ho attitude to shake things up for the better of the country. But, as with the previous disconcerting negotiation moves, this one should probably not be taken as seriously as it was by currency markets, which responded with a distinct mark-down of £-Sterling. At the end of the day, it remains – now even more than before – in the very best interest of both sides to achieve a mutually beneficial trade deal, rather than falling out with their biggest trading partners at the very point that economic headwinds would be most destructive. Just as the government’s 31 July deadline passed without any further mention, we would not be surprised to see 15 October pass in the same way. The real deadline to watch is the summit of European heads of state in early December. Our expectation is that the final outline of the future arrangements will only come together then – after a few nights of gruelling debate.