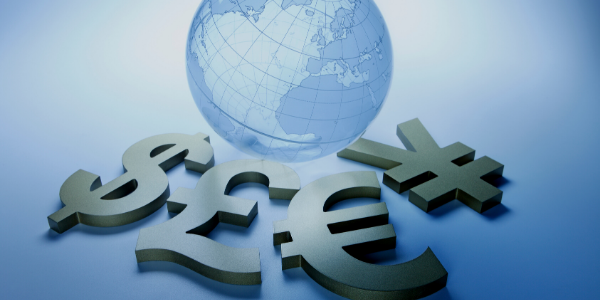 With vaccines being rolled out across the world, and substantial monetary and fiscal support for the foreseeable future, economic activity in the second half of this year is all but certain to be stronger than 2020. But much of this optimism has already been priced in. Just as last year saw the worst global recession on record paired with booming stock markets, the recovery this year might only match markets’ lofty expectations.

For upside in equities to be supported from here, the economy and global corporate earnings will have to be at least as good as was expected at the beginning of the year. It is welcome news, then, that global growth estimates have been trending upwards.

This week, the International Monetary Fund (IMF) revised its forecast for global growth in 2021 and now predicts an expansion of +5.5%, following a vaccine-powered surge in activity. In addition, last year’s recession was not quite as deep as feared, according to the IMF’s latest outlook. It now 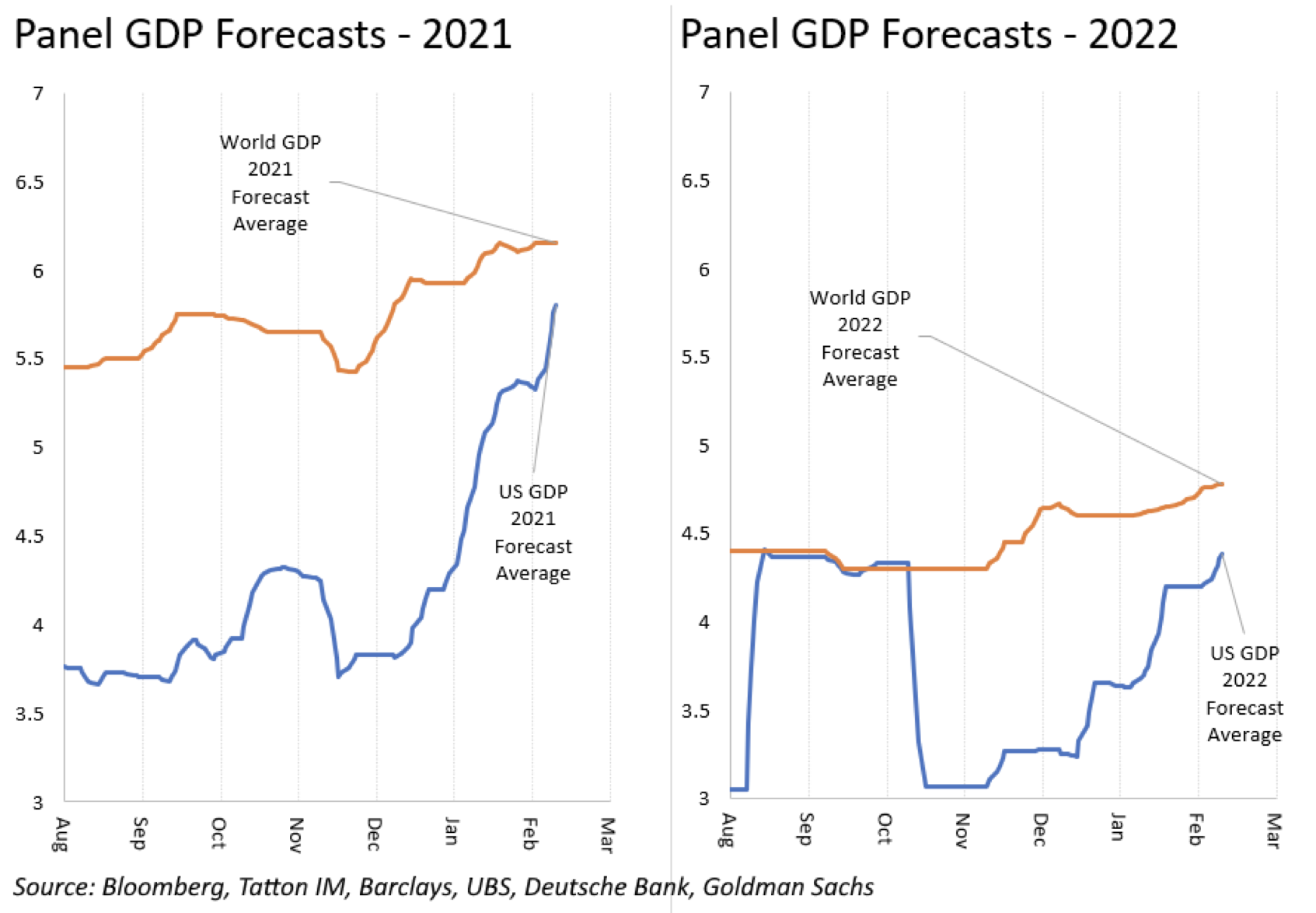 puts 2020’s contraction at -3.5%, compared to the -4.4% expected in October, after growth momentum came in stronger than expected in the second half of the year. Our panel of investment bank forecasts are even more positive. For 2021, the global growth forecast average has moved up to +6.15%; for 2022, up to +4.8%. Both are driven by the sharp upward shift in US expectations.

Business sentiment surveys are similarly positive. In the US, purchasing managers indices (PMIs) remain elevated for the manufacturing sector – indicating that businesses expect expansion – while expectations for the services sector have been rebounding. A deceleration in China is causing some concern for the global picture, but this is likely to be more than compensated for by an improving US picture. Anecdotally, a number of analysts we talk to have become extremely bullish about the US outlook this year and next.

This is reflected in the strong corporate earnings season. Despite the harsh Christmas period, and lockdowns across the UK, Europe and US, company profits in the last quarter of 2020 held up well. In terms of earnings per share (EPS), this reporting season has been one of the biggest positive surprises in the last 20 years. In the US, 82% of companies having reported so far have beaten consensus expectations, while 69% of companies have done so in Europe.

Things look even better when it comes to future expectations. In dollar terms, EPS estimates for 2021 and 2022 have improved across the board, though American companies beat their European and British peers by some distance. Still, JP Morgan suggests the global profit outlook is rosy. The IMF’s 2021 global real growth forecast of +5.5% translates to a nominal forecast of +8.9% (for 2022, a nominal growth of +7.4%). Global EPS growth is likely to be strong, as its graph indicates: 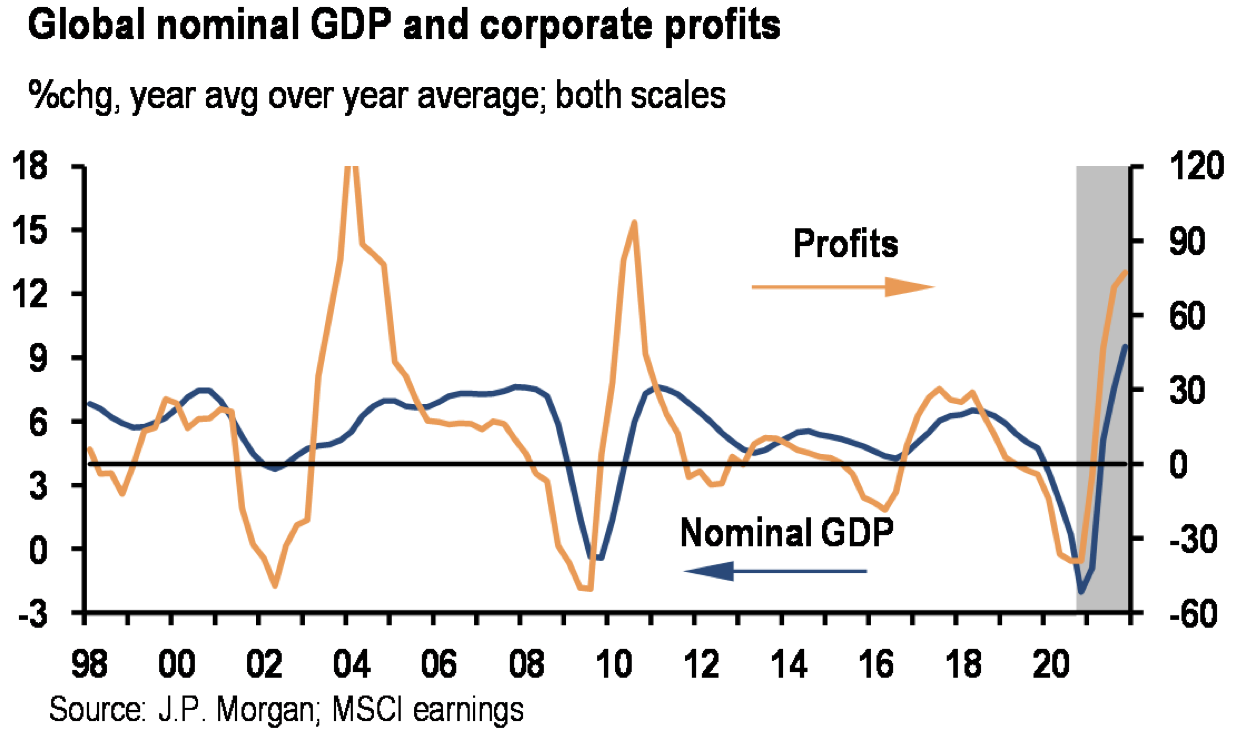 Business expectations have clearly improved, and that positivity is rubbing off on investors. Policy support is a key pillar of this optimism, which is no doubt a reason for the US outperformance. We know that the US Federal Reserve (Fed) is committed to extraordinary monetary easing until further notice, but the Democratic Party’s recent wins in the US Senate have added a substantial boost to fiscal expectations.

President Biden has made a $1.9 trillion COVID relief package his top legislative priority and market analysts now expect that he will be able to get at least $1.5 trillion of these fiscal measures sanctioned by Congress. Combined with the packages already put in place – including the $900 billion passed by Congress in December – this should give the American economy a huge tailwind. The Democrats are planning to hand out $1,400 payments to every citizen earning less than $75,000 (phase-out beyond $75k), while unemployment and other benefits will be expanded and extended. Raising the minimum wage to $15 per hour is one of the more controversial elements of the spending bill.

Beyond the current stimulus bill, which is more of a stop-gap, Biden has promised a significant boost to public infrastructure investment. This is likely to be subject to negotiations in March. For a longer-term investment horizon, this is an important element. Whilst infrastructure spending is notorious for taking a long time to feed into the economy, it could also have a more sustained long- term effect. Carbon emissions-reducing ‘green infrastructure’ is the top priority here, with Biden making environmental investment pledges a key part of his campaign. This should significantly aid the US to transition out of a carbon-based economy, boosting productivity and growth prospects along the way.

Infrastructure stimulus should also encourage private investment, with businesses seeking to capitalise on opportunities brought by the recovery. Here, the medium to long-term outlook is extremely positive.

With revenues decimated by the world’s worst peacetime recession, productive business investment had been expected to fall dramatically – presaging economic woes further down the line. However, according to JP Morgan, business capital expenditure (capex) rebounded rapidly after the first wave of the pandemic, and has been extremely resilient through the second. Global capex (excluding China) reached pre-pandemic levels by the end of last year, and is expected to be 7% above that by the end of 2021.

This is clearly a big boost for the US economy, demonstrating that the ‘animal spirits’ of economic recovery are in full force. But it should also be a positive for the world. The world’s largest economy tends to export its growth around the globe, by means of increased demand, meaning that global corporate profits and growth should be well supported.

Such is the optimism about the ‘bounce-back’ recovery that market focus has now moved onto what happens after it. News and media debates have intensified around the next innovation and investment cycle – with attention not just on virtual investment, but more tangible areas like biotech. The green revolution is another huge component of this, with governments and businesses now increasingly focused on environmentally friendly means of recovery.

It has been interesting to see the moves from big oil companies, which seem to have realised that investing in the green space is an ‘adapt or die’ moment. Royal Dutch Shell has claimed its carbon emissions and oil production has already peaked, and laid out a plan for a transition to clean energy production.

These are longer-term considerations, but it may not be long until they start majorly impacting market trends in the present. Despite the dour winter we are having, conditions remain extremely supportive for a strong rebound later in the year, as we all intend to catch up with what we have missed. The pandemic and its recovery have accelerated many trends present before, and investors are taking notice.