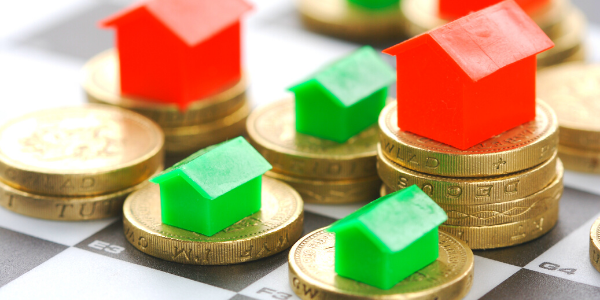 Markets and the public are eagerly anticipating the economic recovery, when last year’s lockdown bust will make way for the post-pandemic boom in growth. A combination of incredibly supportive monetary and fiscal policy, together with a rapid vaccination programme in the UK and US (and now belatedly picking up steam in Europe), has led to widespread expectations of growth in activity and price inflation. We are beginning to see signs of this coming through in actual data, but one area where the boom already seems in full swing is the housing market. House prices have been surprisingly well-supported throughout the crisis, with ultra-low interest rates and favourable policies (in the UK, namely the government’s stamp duty suspension) providing the backdrop for strength. Meanwhile, emergency fiscal spending has bridged the funding gap for households and supported incomes at decent levels – despite the deepest recession on record.

All of this has resulted in a notable rise in property prices. This week’s data in the UK was reported as being slightly disappointing, with the Land Registry saying that the average house sale price had slipped during February from January’s level. This had been foreshadowed by the Halifax index showing a similar move. However, the yearly change still moved up to 8.6%yy, the best since mid-2014, while the RICS House Price Balance Survey suggested renewed positivity from estate agents, signalling continued upside.

In Australia, property prices have shot up so much that the government is concerned about the runaway market and what it could do for consumers. House prices there had a pretty bad patch during 2018-2019 as commodity prices were under pressure during the Trump trade wars, but the Australian CoreLogic median house price index hit a startling 3% rise month-on-month in March, the highest rise since the heady days before 1990.

On the one hand, a booming property market is good news for the recovery – pushing up consumer balance sheets and therefore encouraging consumption. But on the other hand, if property prices spike too high and too soon, it will stretch affordability – particularly for those with low incomes that have been hit hardest by the recession – and potentially cause the house market to get toppy.

This is true virtually everywhere across the developed world, with some countries seeing increases to levels higher than ever before. In Australia, for example, property prices have shot up so much that the government is concerned about the runaway market and what it could do for consumers. On the one hand, a booming property market is good news for the recovery, pushing up consumer balance sheets and therefore encouraging consumption. But on the other, if property prices spike too high and too soon, it will stretch affordability – particularly for those with low incomes that have been hit hardest by the recession – and potentially cause the market to get ‘toppy’.

Looking forward, there are reasons to be positive, including a continuation of the supportive policy environment. House prices can only rise if incomes are sustained. Eventually, this will come from the overall recovery and the growth it will bring. But in the meantime, the substantial monetary and fiscal stimulus of the pandemic will be needed. On the fiscal side, the worry is that governments could withdraw support too soon – an idea already being floated by politicians concerned about ballooning national debts. Should that happen, the recovery could be set back, to the detriment of property prices. Here, we note that policy support in the US seems to be shifting to supporting (lower) household incomes, and that in February the US Federal Reserve (Fed) stepped up its mortgage security buying to hold mortgage rates down, when government bond yields saw a rather steep rebound. All this is pointing to further support.

The continuation of loose monetary policy is even more vital, but recent price moves create a problem for central banks. They must continue to keep financial conditions easy and support the wider recovery, but they are all too wary of how their actions can create asset price bubbles. We saw this problem in the decade after the financial crisis, when abundant liquidity caused capital to flow into certain markets and inflate prices with undesired side effects, for example in the commodity sector.

In theory, central bankers could respond to these worries by pointing out that they – or other policy makers – have macro-prudential policies in place to deal with imbalances. In most cases, this would mean governments and regulators would need to join the effort to stop certain asset types from overheating, whether that means tightening lending standards or raising taxes. Without those additional policies, central bankers are left trying to fine-tune markets with a bazooka.

Markets have been excited and concerned in equal measure about the recovery, and the prophesised return of inflation. In house prices, as well as certain other asset markets, we are already seeing this inflation. But the latter does not necessarily lead to the former, and it remains to be seen when consumer demand-led price rises, accommodated by wage rises, leads to the return of structural inflation – and even whether rising property prices will be a help or a hindrance to it. The data we have from the UK is a little ‘noisy’ on this issue, but we can speculate as to the most likely scenarios.

If consumers have a huge level of debt outstanding on their property – through low-deposit mortgages or loans with variable rates – they have less money available to spend on discretionary goods – especially when rates go up. Ultimately, we would suggest that the issue is not so much about whether asset price spikes lead to consumer inflation, but whether the overall policy framework is fit for purpose. That is, whether policy is strong enough to lift overall economic growth – from which increased pricing power and inflation will naturally follow.

What we do know is that housing activity does have a direct effect on construction, which creates jobs and growth, as construction activity gets counted straight into GDP numbers. From a pragmatic point of view, politicians and policymakers are likely to be intensely focused on GDP figures, and so the building angle might be all that is needed to get them keen on house price rises. Certainly, we already see politicians promoting infrastructure spending – particularly green infrastructure – on the basis of the jobs it will bring. In the UK particularly, there is a great deal of‘green upgrades’, from insulation to energy, that could be carried out across the nation for a relatively low cost.

Policymakers tend to only get involved when one of two situations arise. First, when household balance sheets are showing signs of excessive leverage, regulators tend to step in to decrease risk. Second, when burgeoning asset values cause a damaging increase in inequality – whereby construction and public investment programmes can be a useful remedy. Which of these happens remains to be seen, but the housing market is showing no signs of slowing down just yet.