Please sir! How long will the UK stay bottom of the class? 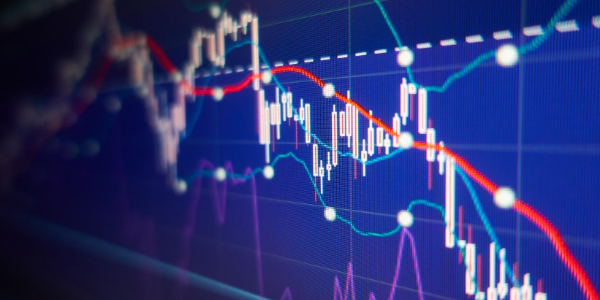 Throughout the pandemic, the UK has been beset by a host of unflattering comparisons. The statistics on virus cases, deaths and other health figures have consistently put Britain as one of the hardest hit countries in the world. This week, the press focused on a different kind of bad news: In GDP terms, the UK economy shrank more than 20% in the second quarter of the year – making it the worst-performing country in Europe over the three months to July. For the first half of the year, economic activity fell 22.1%. That puts the UK bottom of the table for G7 countries, and ahead of only Spain among its European peers.

Understandably, these statistics make sobering reading. On their release, Chancellor Rishi Sunak told the nation frankly that the “hard times are here”. The media ran with stories of ‘economic doom and gloom’ and the Labour party lambasted the government’s handling of the crisis in health and economic terms. But historical comparisons do not tell the whole story. Although this recession is the deepest on record, this is less to do with the shrinking demand of a ‘classical’ recession, and everything to do with an economy effectively forced to shut down for an unprecedented period. If anything, the nearest comparison would be the economic impact of a natural disaster – minus the physical destruction element.

Regional comparisons can also be somewhat misleading. The UK was slower into lockdown than its European peers and – as a consequence of higher virus cases and deaths – significantly slower to open up. As such, the UK spent most of Q2 following instructions to ‘stay home, save lives’, whereas European nations were gradually opening up their shuttered economies. To illustrate this, the Q1 GDP declines for France, Spain and Italy – where lockdown measures began earlier – were all more than double that of the UK.

Of course, none of that is to suggest that things are all rosy on the home front. That the UK’s H1 contraction was among the sharpest in the world – and more than double the similarly slow-intolockdown US – clearly shows the mountain we have to climb. But there are signs that the recovery has already begun. In June, for example, month-on-month growth came in at 8.7%. With businesses now opening up, some of that rebound was inevitable. But the speed of June’s recovery still surprised economists. In fact, June’s growth figure is consistent with the Bank of England’s most recent forecasts – discussed in last week’s update –which many suggested were overly-optimistic about Britain’s short-term recovery.

More important than the depth of the immediate downturn is how quickly things can return to something like normal. The high-frequency data on activity – measuring movement, traffic, daily purchases etc. – can give us some idea of this. As shown in the chart below, the UK is indeed lagging its European peers. Again, we should be cautious about how to interpret this, given different lockdown timeframes and possible seasonality effects (with Britons coming out of lockdown straight into the summer holiday season).

Nevertheless, it does seem that the UK public are somewhat slower on their road back to normal. Part of this is likely to be the difference in ‘fear factor’. Having experienced a bigger wave of virus infections and deaths than those on the continent, Britons may be keener to avoid public spaces or office environments. The chart below shows individuals’ likelihood of avoiding travelling to work, based on survey data from a handful of countries. Although those working from home in the UK has been steadily declining as lockdown has eased, the number remains higher than most others. 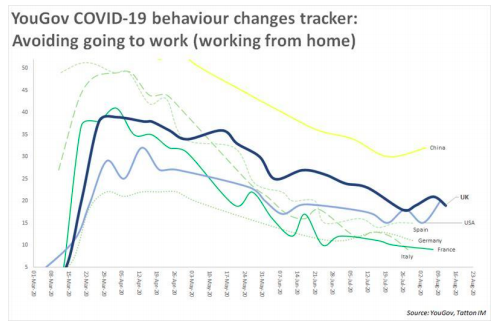 Virus fears are one likely cause of this, but we suspect there could be structural reasons for it too. Britain’s economy is overwhelmingly based around services. And while many of the client-facing service jobs can only be done in person (such as bar and restaurant workers, whose prevalence perhaps explains the severity of the UK’s recession) those who can work remotely are doing so. Many businesses (ourselves included) have found the work-from-home model to be relatively problem-free. And with strict government guidelines on workplace safety, there is little incentive to fill up idle office blocks anytime soon. That is bad news for those working in pubs, restaurants and shops in city centres, but office-based businesses and their employees are increasingly seeing the commute as unnecessary – for now.

Again, we should be cautious about drawing grand conclusions. It is still early days on the UK’s road to recovery, and business activity usually gets a little lighter over the summer months. But we can say that the record drop in GDP does not necessarily spell doom for Britain’s long-term prospects. Over the next couple of months, when seasonal effects wear off and we get a better idea about how the virus containment is going, the economic outlook will become much clearer.

In particular, the government’s decision to renew the furlough scheme or let it expire in October will be crucial. If activity is looking more normal, and the public health impact from the resurgence of the virus remains as contained as it is now, letting the economy find its own feet may not be such a terrible idea. But if one or both of those things does not happen, allowing wages – and therefore household incomes – to dry up could be disastrous. And in the meantime, businesses and individuals could be left with crippling uncertainty that would most certainly curtail their willingness to spend. For now, the rumours of Britain’s economic demise have been greatly exaggerated.