Politics get in the way of Chinese investment 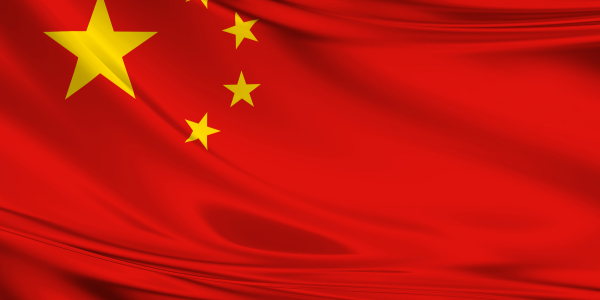 In economic terms, China is one of the best placed of any major economy to recover from the pandemic. The first country to suffer heavily from Covid was also the earliest to emerge from lockdown, with life now well on its way back to normal in the world’s second largest economy. Wuhan, a city of 11 million people and the original epicentre of the virus, is now the focus of a PR campaign from the Chinese government – encouraging tourists and international businesspeople from all over to come see the “reborn” city. From the latest economic data, it looks as though China has pulled off nearly a complete V-shaped recovery in the third quarter of 2020. This is while developed and emerging markets the world over are languishing – as shown in the chart below. 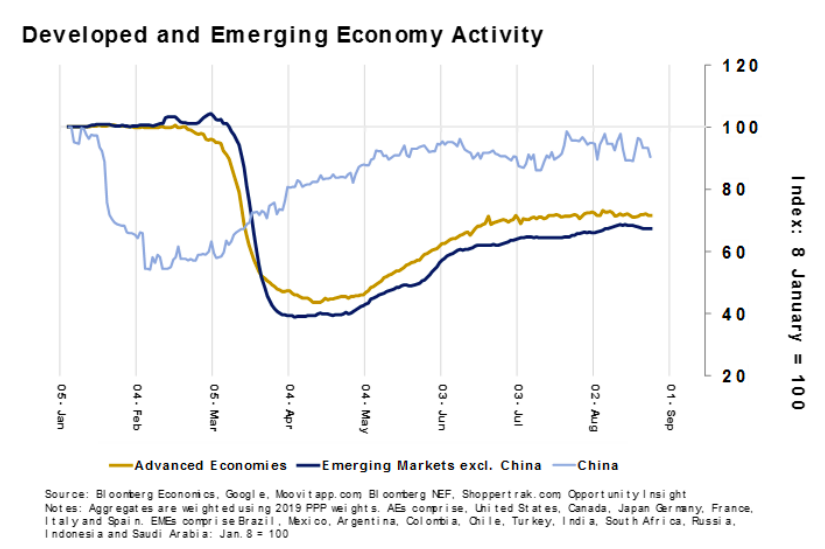 Historically, China’s post-2000 rise was closely linked to undercutting prices in international goods markets, holding back inflation for the rest of the world. But as we wrote last week, it is worth noting that export prices are currently much higher than what would be suggested by the pronounced slump in international trade. Rather than undercut competitors to pull off an export-led recovery, Chinese export inflation is increasing just as global trade inflation falls. Overall, China’s exporters have fared reasonably well through the pandemic – not only sellers of Covid-related goods (protective equipment, medicine, etc.) but producers of intermediate goods too.

But how is the domestic side faring? Earlier in the year, the pick-up in homegrown activity was somewhat disappointing. Chinese citizens seemed less willing to go out or return to work than their global counterparts – perhaps due to the scarring effects from the government’s tight lockdown measures. But there are signs that caution is receding – with domestic tourism picking up and offices slowly welcoming back workers.

To be clear, this is not the booming Chinese growth we saw over the last couple of decades. But overall things are going reasonably well: signs of a natural pickup in demand are coming through, supported by the government’s substantial fiscal measures.

Financially speaking, China’s handling of the crisis has been markedly different from its global peers. While the government has kept fiscal policy supportive, monetary policy has not followed suit. Unlike central banks around the world, the People’s Bank of China (PBoC) has not injected huge amounts of liquidity into the system, and indeed has recently allowed interest rates to go up. Even short-term deposit rates are now back to where they were before the virus hit.

This could be down to the government’s longstanding efforts to wean the economy off cheap credit (deleveraging). But this is where the other oddity of Chinese policy comes in: policymakers have been easing up the banking system. Authorities are now allowing – indeed, actively encouraging – banks to take on more risk. Local government bond issuance, through which China runs and finances its infrastructure projects, keep coming though (even if issuance had been frontloaded in response to the Covid crisis). This means that, despite the PBoC constricting base money supply, the government is increasing the overall effective money supply through loosening credit conditions, thereby increasing the turnover of money.

All in all, this is positive for China. Barring a second wave of virus cases, domestic demand – supported by fiscal policy – should hold up well, while the external side of the economy benefits from the global rebound. That economic positivity makes a strong investment case for China.

The problem for international investors is – as always with China – politics. Tensions with the US are well-known, and there is little sign of de-escalation even if Donald Trump loses office in November. Rhetorically, Chinese officials have matched the Twitter-happy US President blow for blow, but in actual trade policy terms have remained reasonably accommodative and open to negotiation. The biggest danger for the US-China relationship is that the growing cold war turns hot, and spills over into accidental or intentional conflicts. That would be a big problem for the whole world, not just China and the US. Thankfully though, China’s economic and cultural integration with the US and the rest of the developed world make that somewhat less likely.

However, China’s political problems are not just on the international scene. Since becoming paramount leader eight years ago, President Xi Jinping has slowly broken down the system of informal checks and balances constructed by the Chinese state since Deng Xiaoping stepped down in 1992. Xi is now the head of the Communist Party, the state council, the military and, most recently, the police. Those positions are now effectively his for life, after his removal of constitutional term limits in 2018.

Xi’s tenure has seen multiple crackdowns on his perceived political enemies, and reports suggest another may be on the way. According to the Nikkei Asian Review, Wang Xiaohong – the head of China’s secret service bureau and close ally to Xi – has written an article calling for increased political discipline. His particular targets are “two-faced people”, who feign loyalty but secretly denounce the party or its leader. This is a clear reference to Xi’s rival factions and detractors, indicating that we could see another purge of the party ranks or wider society.

This is not good news. Aside from devastating human rights abuses, Xi’s increasingly tight grip on power has caused a great deal of friction in the country. Anti-corruption purges have often led to capital flight from China – with the purged trying to quickly get their money out – and instability in affected private companies. It has also clearly acted as a deterrent for international investors, as crackdowns highlight the inherent instability of China’s centralised power.

This, as we see it, is the biggest headwind to the otherwise improving investment case in China. Even though the economic fundamentals are present, the risk is that political developments could quickly get in the way of the return of capital – without any recourse if they do. Unfortunately, with Xi’s grip on party, state and military institutions only set to tighten, this is looking unlikely to improve and will require ongoing close monitoring for confirmation or disproval.