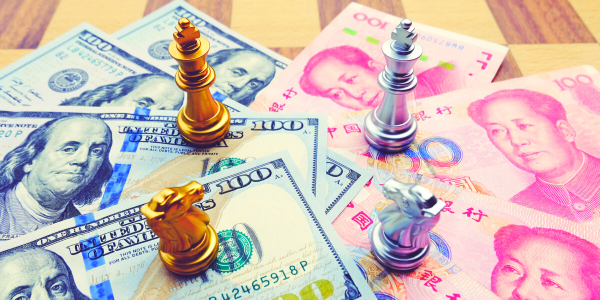 Stock markets around the world have had another choppy week, but this time there was more up than down across the board and bonds yields stopped their upwards trend – at least for a while. The general upward trend notwithstanding, there was a lot of rotation and counter rotation between different market segments. With the tech heavy US Nasdaq index going through the wildest of the week’s roller coaster rides – first down a lot then up a lot only to then sell off again – it does look as though markets are still undergoing a recalibration phase.

This makes sense, given rising yields (on the back of a vastly improved near-term economic outlook) mean that stock markets have to learn to stand on their own feet again, rather than relying on being the only (investment return) show in town, while governments take care that risk of corporate failures are mostly contained compared to traditional recessionary periods. Valuations metrics are beginning to matter again and, just as the stay-at-home-economy of lock downs had its winners and losers, so will ‘the catching up’ recovery that lies ahead.

The same applies to different global regions, be it because of their relative success in suppressing the impact of COVID, (i.e. China) their cyclical industrial structure (i.e. Europe and wider Emerging Markets) or because of vast and effective fiscal stimulus measures to re-accelerate their economies out of deep recessions (i.e. the US).

As a result, we are this week looking in our two focus articles at the $1.9trn US fiscal stimulus package that President Biden signed into law Thursday night after it successfully passed through Congress and contrast it with China’s likely fiscal and monetary stimulus position following the National People’s Congress.

Both are decisively important for other economies and for global markets. The political leaders of both areas have stated that employment is at the heart of their efforts. However, the timescales for their policies differ – in part, perhaps, because of the different political systems. The US is embarking on another splurge to ensure the nation is positioned strongly for the post-pandemic restart, while China has long term stability of its capital markets as a main goal. That is leading to quite different near-term paths for growth. The US, rather than China, will once more be imparting its largesse to the rest of the world and become the economic motor after China had taken over that role for the past decade. That probably means a more general benefit for world growth, whereas Chinese growth tends to specifically benefit commodity, machine and luxury good producers.

Meanwhile, this Friday morning while writing this, China’s push for stability has impacted markets more immediately. The Chinese Renminbi weakened after authorities imposed fines on Chinese mega-tech companies on behalf of monopolistic deals in the past. China’s consumer tech giant Tencent was among the companies hit, which also means that Tencent potentially faces the prospect of having to create a separate holding company for its fintech arm. Tencent’s share price is down about 5% from yesterday’s level, sparking renewed tech sell-off pressures, just as the sector seemed to have stabilised after the pronounced sell off earlier in the week.

Increased oversight of “fintech”-related companies hit hard before, when at the end of last year, the stock market floatation (IPO) of Ant Group (Alibaba’s fintech offshoot) was stopped a day before being sold. By comparison, it may be that over in the US, Biden’s administration will set about dealing with some of the US tech giants’ negative impacts at some point over his four-year presidency, but it does not appear to be top of their agenda for now.

Over to Europe it is worth noting that Europe’s economy is about the same size as North America’s (In January the IMF reckoned Europe will produce about $23 trillion of output this year, North America $24 trillion). However, following the slow roll-out of mass vaccinations, fewer think that Europe is likely to overtake the US in term of growth this year, even if stock market valuations still present more upside potential on a comparative basis after the US’ outsized recovery rally last year.

In 2020, the market was happy to slap the backs of Europe’s leaders after they worked together to raise vast amounts of fiscal stimulus money jointly. Markets rewarded the Euro particularly, taking it up to $1.23/€ at the start of the year, amid the certainty of vaccination. But it turns out that wishing to work together is not the same as actually getting things done at speed and so it waits to be seen whether the EU’s recovery fund will beat Biden’s infrastructure rebuilding plan timings. However, Europe’s advantage is that its social net already constitutes the private demand stabilisers that Biden’s $1.9trn support program has to create for US employees and produces many of the goods a rebounding ‘physical’ global economy needs.

It was nevertheless a positive this week that Europe’s central bank, the ECB, signalled markets that they would not allow financial conditions to tighten from rising bond yields and step up their countermeasures.

Much of investors’ focus has been on the US this week because of its raucous market action and the mind-boggling size of the fiscal support program. We should, however, keep in mind that various European nations are approaching elections and so it is reasonable to expect that they will not want to continue to lag behind for much longer. We hope that this urge by politicians to get things moving will manifest itself on constructive industrial and infrastructure policy action instead of the current painful ‘he said, she said’ finger pointing.