‘Risk on’ pauses while the real world keeps accelerating 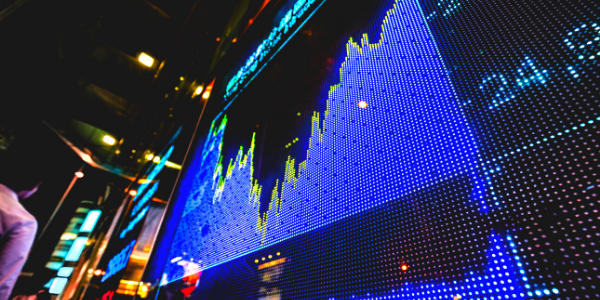 Equity markets finally paused in their upward trend this week, with the most speculative assets like Bitcoin experiencing their first serious setback since February. It was hard to pin the cause on any one specific development, although falling oil prices got their share of blame. The earnings season was certainly not at fault, with reported sales and earnings growth in the US outstripping already optimistic expectations, while bond market action likewise continued its newfound supportive stance that we wrote about last week.

More likely it was a more general dampening of investor sentiment in the face of increasingly cautionary reports from investment bank analysts about overheating markets, alongside a powerful resurgence of COVID in India. Plus, there were headlines on tax hikes for investors, as well as mounting levels of government intervention in the free market economy to slow the climate crisis, and even an abortive football ‘coup’ of sorts. We cover the intervention aspect in a separate article this week and discuss the news on investor taxation here.

On Thursday, unconfirmed but very plausible, news emerged that the Biden administration is proposing to tax the capital gains of US citizens whose annual incomes already exceed $1 million at the top ordinary income tax rate of 39.6% (43.4%, adding the existing 3.8% tax on net investment income tax which is ostensibly for Obamacare). This is seen as an opening gambit and Goldman Sachs expects Congress will settle on a more modest increase of around 28%, probably effective from the start of 2022. This tax hike is really aimed at business owners and top executives, who use shares as a way of paying themselves, thereby avoiding income tax. The loophole in the tax system (a feature, rather than a bug) led investment industry icon Warren Buffet to highlight the absurdity of him being taxed at a lower rate of tax than his secretary.

The tax will not affect UK tax-domiciled investors directly, but will particularly impact the US private equity sector, and could have some impact on ordinary US stockholders of the major listed companies. Even so, the effect on the desire to hold stocks will be marginal for the vast majority of US citizens who are either below the $1 million income threshold or hold shares through their investments via the pension tax wrapper (401K) system. Historical observations from previous capital gains tax (CGT) rises show that stock markets have usually risen following an increase, but  traded more sideways than up in the run-up, as investors crystalised gains under the lower tax rate and then reinvested.

For UK investors, much more important will be whether our own government takes the opportunity to follow suit – which given the noises ahead of the last Budget seems relatively likely. More decisive for US stock prices, however, will be the efforts to increase the tax take from companies directly. One might think that the Biden Administration is using CGT as a means of keeping up the pressure to get the corporate tax rise through.

As a result, we continue to be somewhat wary of the largest stocks that would be most greatly affected by the increase in effective tax rates, given they have been most effective in utilising the existing loopholes.

So, should one head for smaller companies? Smaller stocks have performed very well over the past 12 months. Companies that have fared particularly well are those which currently have relatively little profit but are expected to be grow strongly over the coming two years. In other words, growth stocks. This is not only true for the US, as investment bank JP Morgan recently wrote about the outperformance of small and mid-cap growth companies globally, pointing out that the difference in valuation levels (P/E ratios) between growth and value stocks has reached levels similar to those of the heady days of the dotcom era at the beginning of the century.

JP Morgan ends up being outright bearish about these growth stocks, because it believes their inherent earnings growth expectations have become too stretched, especially as a lot of earnings growth is already forthcoming, a view we broadly share.

However, we think that the level of real interest rates (i.e., nominal interest minus the rate of inflation as priced by the inflation-linked government bond markets) relative to ongoing earnings are probably more important. That ratio has remained fairly stable over the past few years of strong stock market gains but declines in real yields. We will explore that dynamic in more depth in the next few weeks.

Turning back to the here and now, we wrote last week about how companies built up their defensive financial liquidity buffers at the start of the pandemic, and how that has fed through to lower than expected demand for bank loans now. The results of US banks confirmed that, and now the European Central Bank’s quarterly Loan Officer Survey (released this week) points to much the same thing. French and Spanish banks are seeing slow demand for funds from companies, though Germany is faring slightly better (the American version from the US Federal Reserve (Fed) will be published on 3 May).

Bank loans tend to be the source of funding for smaller companies, while large companies access loan funding more cheaply through capital markets directly, which points us towards recent bond issuance data. Relatively, in both the US and Europe, Bloomberg’s data on new bond issuance shows a much stronger level of demand for funds than is seen via loans, especially in the sub-investment grade area.

The chart below shows this year’s pace of US issuance in comparison to the previous four years: 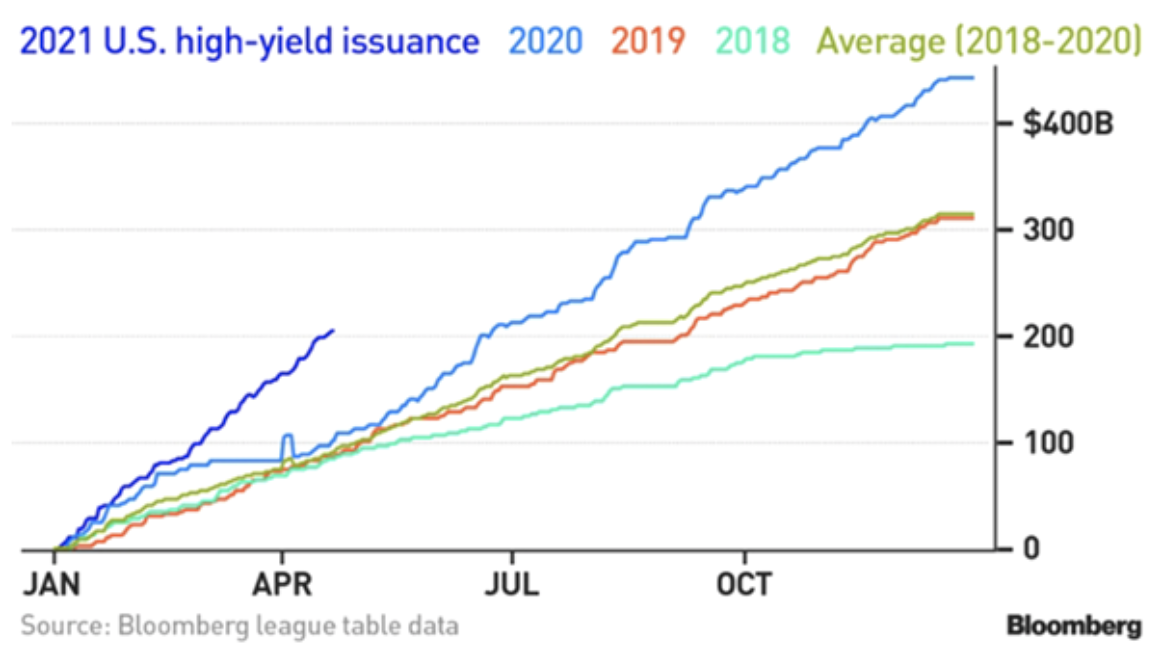 Looking at the US specifically, where loan data is more readily available, the sum of bank loan and bond amounts outstanding has started to rise since the start of the year, with bond issuance exceeding another round of bank loan pay-downs, thus resulting in a net increase of overall loan finance.

That’s good news for the US economy. It shows that firms are probably confident, actively looking for finance despite having quite high levels of liquidity and markets receptive enough to their demands that they can afford to side-step the banks. Capital expenditure indications are very strong, which indicates firms are spending some of their excess liquidity (as long as they can get the equipment, given the shortage of semiconductor chips).

Meanwhile, the tightening in the labour market is leading to greater consumer confidence, and that is creating a house price and house-building boom (we cover aspects of this in our second article this week). Ongoing demand for mortgages is stronger than one might have expected given the recent rise in the long-dated fixed income yields.

Eventually, rising total private sector credit demand will become an upward force on yields again, and the spurt of bond issues in March – together with continued mortgage demand – appears to have been behind last month’s sharp rise in yields, and the resultant downswing in US treasury bond prices.

When do central banks start to get worried about private sector credit demand fuelling an overheating of the economy? Right now, we are still only at the start of a demand upswing, so we do not expect policymakers will begin feel the heat for many months yet, but it will be worth us watching events closely.