‘Sleepy Joe’ wakes up the US economy 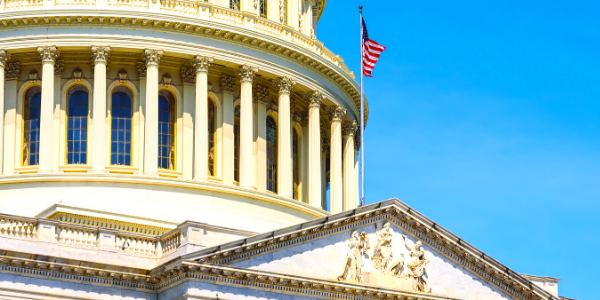 Things are looking good for President Biden as his hundredth day in office passes. The US economy grew by a very healthy annualised 6.4% during the first quarter. While overall growth was a little less than expected, personal consumption accelerated more than 10%. The reason this is not proportionally reflected in GDP growth is because inventories had to be drawn down to satisfy demand amid the problems in supply chains which knocked growth back. As inventories are replenished this should translate into stronger growth for the rest of this year.

In a sea-change from the tumultuous Trump years, the Biden administration has exuded an air of activism and effectiveness as America recovers from the pandemic – and capital markets are fully behind it. The 200 million vaccine doses injected into citizens has given hope that the economy can reopen swiftly, and several huge packages of fiscal stimulus have supercharged growth expectations. Investors, businesses and consumers all appear confident the recovery will continue in force – the latter buoyed by the $1,400 stimulus cheques handed out in recent weeks.

Fiscal policy has played a huge part in the good mood, and will continue to do so as the White House’s spending plans move from emergency support to long-term public investment. But just as important has been the incredible support provided by the US Federal Reserve (Fed). Throughout the pandemic, it has kept interest rates at historic lows and flooded the financial system with liquidity through its asset purchase programme.

Fiscal and monetary stimulus has been so effective at boosting US growth expectations that markets have recently suspected the Fed may have to tighten its policy sooner than it is letting on. Policymakers are showing no sign of backing down, however. After its most recent meeting, Fed Chair Jay Powell dismissed talk of winding down support, even after upgrading the bank’s own forecasts for the economy. “We are a long way from our goals,” claimed Powell, adding that the Fed would respond only to hard data rather than forecasts.

For capital markets, the difficulty is that the hard data is already coming through. Last quarter’s growth figures mean the US economy is slightly larger than it was one year ago, when the pandemic reached American shores, and consumers are in very good shape. Last month, the labour market added nearly one million jobs, bringing the official unemployment rate down to 6%. And judging from consumer confidence levels, the labour market remains buoyant.

The chart below shows consumer confidence stretching back over a few decades, which is closely and inversely correlated with employment figures. Before the pandemic, confidence steadily rose just as unemployment fell to its lowest level in decades – only for the shock of lockdown to send expectations the other way. Now though, consumers are almost as confident as they were before the COVID crisis began. That is understandable, given the artificial nature of many lockdown- related job losses (as travel and leisure industries are expected to hire back workers almost as fast as they laid them off) and the substantial income support provided by the government. But it means the labour market may well be tighter than it looks from the employment figures alone. This is backed up by anecdotal reports that businesses are struggling to find employees – particularly smaller businesses affected by lockdowns. 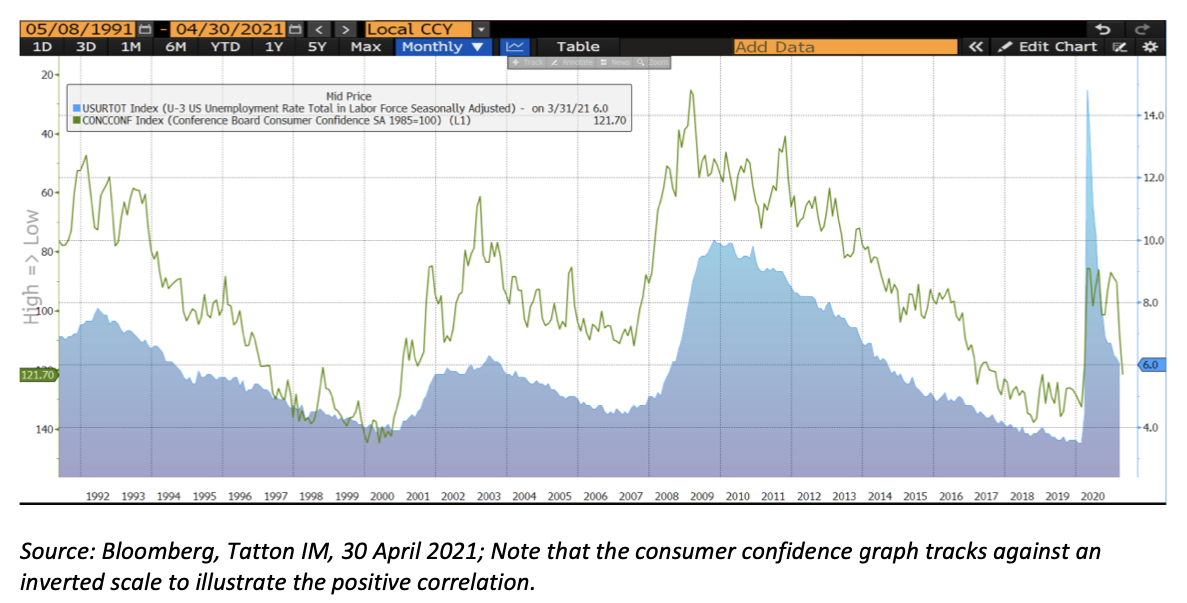 A tight labour market and booming consumer spending is a recipe for inflation, which is why markets are expecting price increases to ramp up and put pressure on central bankers as we move through the year. But again, the Fed has made it clear it wants to be reactive to inflation rather than proactive, and will allow substantial overshoots of its 2% target to account for past periods of low inflation. This decision is the result of the Fed’s recent policy overhaul, which prompted a re- evaluation of its ‘dual mandate’ (stable prices and full employment) in favour of better promoting jobs and wage growth.

As we have written before, the framework shift makes it difficult to assess how the Fed will react to incoming data. But what we do know is that the central bank wants to give greater consideration to the ‘participation rate’, a measure of how much of the working age population is pursuing employment. Participation rates are certainly still low historically, suggesting workers lack the incentive to join the labour market.

Usually, this disincentive is because of a lack of well-paid or favourable jobs, but this time there could be a different explanation. Household savings have held up extremely well in aggregate through the pandemic, supported by substantial fiscal support, a fall in consumer spending and – crucially – a decent housing market. In short, consumers are in good shape financially, having paid down debts and put money away over the past year. And when savings are high, consumers are much less willing to take whatever job they can get their hands on. If that is true, it would suggest wages will need to rise as the recovery gets underway, to tempt people back into the labour market, or for households to have run down their savings enough as they resume consuming more with the re-opening of the economy.

Let’s take stock of all these factors. We have a central bank committed to keeping things loose, and liquidity abundant for the foreseeable future, a government supporting incomes in the short- term and investing heavily in the future, a population with plenty of savings and high confidence, and an economy finally starting to reopen. Together, these point to a booming 2021 US economy and an uptick in inflation – perhaps even more than is currently expected. How broad-based and long-lasting inflationary tendencies become will depend more on next year’s than this year’s growth. How will the economy react once the sugar rush of reopening has washed through, and the temporary bottlenecks in supply chains have subsided? Much will depend on fiscal and monetary policymakers to carefully manage the transition back to a ‘normal’ economy.

In past episodes, when the US economy recovered from a recession, the natural response was for the Fed to signal monetary tightening down the line – which has tended to result in pre-emptive tightening through markets before the tightening actually happens (the last significant such episode was the 2013 ‘Taper Tantrum’, for those who remember). That is why bond yields rose over recent months – as markets tried to anticipate the Fed’s movement. But this misses the crucial point – the Fed wants to change its ‘natural’ response. The point of its recent policy review was to get rid of a structural bias for low price inflation, and instead promote the share of wages in the overall contributions to GDP – by broadening the workforce through inclusion of all social groups in the labour market. The objective is to shift the emphasis of the US economy from capital to labour, after decades of the reverse. In this sense, the Fed is fully in line with the White House agenda for changing the structure of the US economy. As such, coming out of the pandemic, we can expect not just growth but a different kind of growth than we saw before. Capital owners may perceive this as a threat, but judging by the relative stability in US stock markets, investors seem more concerned with stronger growth lifting all boats than a fraction of investors at the very top end having left a little less once the taxman has had their share.