State of the global economy 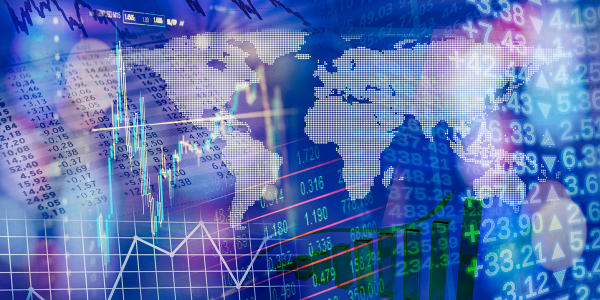 Throughout the middle of this year, we saw an impressive bounce back in economic activity. While the global economic shutdown had frozen business and manufacturing activity, the opening-up into the summer months suggested we may be on course for a sharp V-shaped recovery. Purchasing Managers’ Indices (PMIs) – a survey-based measure of business confidence – showed that firms were indeed optimistic about the speed of the recovery. The numbers for July were all firmly in positive territory, indicating expansion from the lockdown lows.

It may not have come as a complete surprise, but that quick rebound tempo has slowed since. Survey numbers for September – while still in expansionary territory – have slipped, suggesting the road back to normal may be longer than it looked over the summer months. JPMorgan’s all- industry composite PMI for developed economies came in nearly one point below its August levels. But the September declines were not equal across sectors. Most notably, the global manufacturing PMI improved to 52.3 (+0.5pts). The chart below shows the comparisons between manufacturing and services sectors in the different major economies. To note, a PMI of above 50 indicates expansion, while a reading below 50 indicates the opposite.

In the US, the ISM Manufacturing PMI came in at 55.4 for September, down only modestly from August’s 56.0. Most of that decline was driven by a fall in new orders, which fell to 60.2 from August’s spectacular 67.6. This suggests inventory levels are low for manufacturers, pointing to some potential inflation in the price of goods. 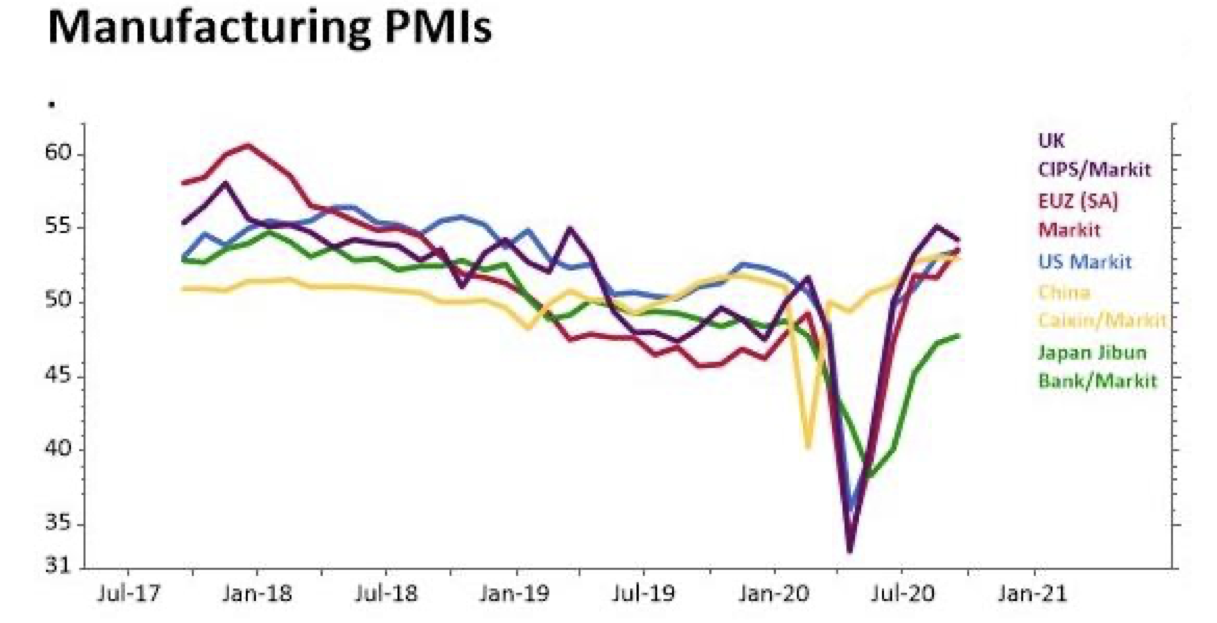 Overall, the picture is reasonable, albeit a little disappointing given the previous V-shaped recovery hopes. What is particularly concerning, however, is the fall back in the services sector, which has shown a clear deterioration from the summer. 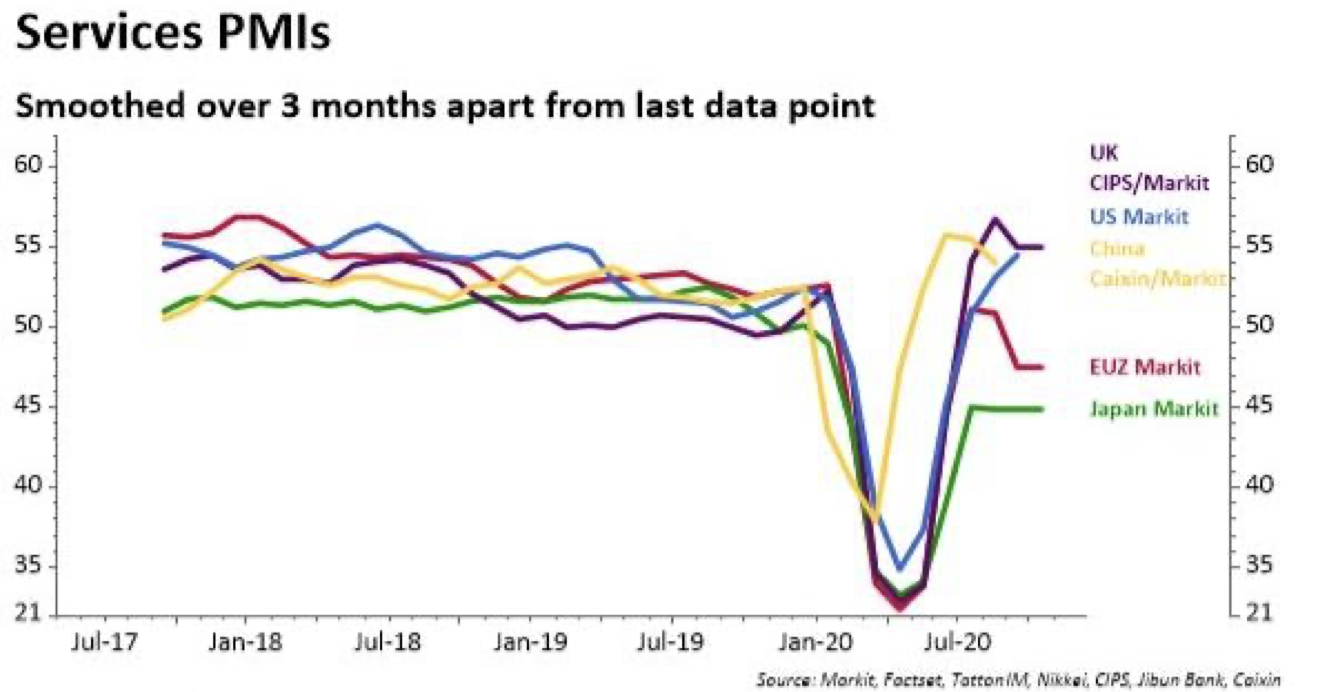 Economic surprise indices show a similar slowing of the recovery. Again, indices are still positive across all major regions, but have dropped from the July and August highs. This has also been reflected in capital market moves. Having regained all of the losses from March, US equities reached new highs in August, only to come off those highs throughout September. In fact, after excluding the US mega-cap technology stocks the capital market rally had already begun to wane over the summer. Small and medium-sized companies were seeing little upside relative to the top dogs once it became clearer that government restrictions and ensuing economic weakness would be with us for a while longer.

To see more upside from here – both for the economy and for markets – we will need to see further signs of positivity. As we have written before, this could come from an earlier-than-expected vaccine rollout – signalling a quick end to restrictions. Or, more likely, it could come from another boost to fiscal policy. We have already seen additional fiscal expansion in Europe and the UK – even if the furlough replacement scheme has proven somewhat disappointing relative to its predecessor – but the key market mover would be further fiscal action in the US.

Unsurprisingly, the political stalemate between the Republican and Democratic parties complicates things. Both sides agree that more spending is needed, but the details – and bitter political differences – keep getting in the way. Whatever the outcome of next month’s election, we will almost certainly get another fiscal package (possibly even before, if Trump tries to boost his re- election chances). But the stronger and sooner the support the better – something the Trump administration will be well aware of.

Without a fiscal boost in the short-term, things could get difficult over the coming months. The capital market rally we saw from April onwards was in large part down to a huge influx of investment from consumers, who, unable to spend their money on much else, put their savings to work in markets. With fiscal support measures now dwindling, individuals have begun drawing down their savings – pulling liquidity out of the system. This is happening just as economic positivity is also tailing off. These two factors combined – in the absence of a significant fiscal boost – would be bad news for investors.

This stands in stark contrast to the other side of the Pacific. In China, the government has repeatedly shown its fiscal resolve throughout the crisis, and shows no sign of letting up. Interestingly, unlike all other major world markets, monetary policy in China has not been particularly loose. Nevertheless, the recovery in the world’s second largest economy is going strong, aided by a generous fiscal drive and a surprisingly positive global trade environment. What’s more, a strong China is clearly boosting other emerging markets in Asia, with export demand greatly benefitting manufacturers.

China’s economic recovery – particularly the growth in exports – is significant. At the onset of this crisis, there was much talk about the threat that COVID posed to global supply chains, and how this would affect economic policy going forward. The virus has undoubtedly laid bare the dangers of globalisation: by relying on foreign industries for goods or vital services, nations can find themselves cut off in times of crisis. And yet, the supposed shift away from global trade towards greater self-reliance is not playing out in the data – if China’s export figures are anything to go by at least.

This is somewhat to be expected. Even if governments want to localise supply chains in future, the immediate problem is the recovery from the world’s deepest-ever recession. And, when businesses and consumers are struggling for solvency, they will opt for the cheapest option, regardless of where it comes from. The prophesised reversal of globalisation may indeed be one of the long-term effects of this pandemic, but while the global economic recovery is ongoing, this scenario it is unlikely to play out.

The status quo benefits China’s exporters, and indeed manufacturers around the world. The fact that manufacturing has held up well – despite the apocalyptic warnings at the onset of the pandemic – is a good sign. But manufacturing strength cannot compensate for weakness in services. As we have written before, positive signs – a vaccine or fiscal firepower – will be needed from here.