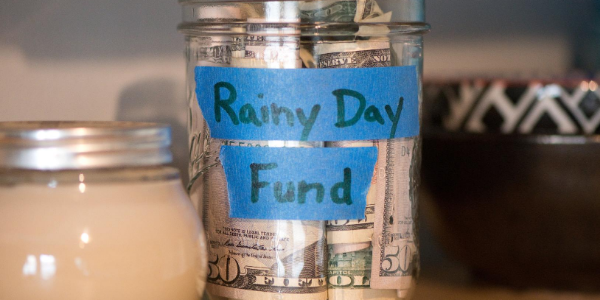 These extraordinary times for the global economy have forced the world’s central banks to extraordinary measures. As usual, the US Federal Reserve (Fed) has been one of the chief protagonists during the emergency, cutting interest rates close to zero and funneling trillions of dollars into keeping the financial system afloat. But in recent weeks, we have noticed a counterintuitive, and intriguing, trend. The pace of Fed asset purchases, which spiked to well over $1 trillion at the height of the crisis, has slowed to around $100 billion a month. At the same time, the Fed’s excess liquidity – the usable cash it has sitting in the banking system – first spiked up at the start of its emergency interventions, and then started shrinking again to levels seen in 2014/2015. Given the lengths the Fed has gone to during the crisis, this retrenchment seems a little puzzling. What’s more, the explanation brings up just as many questions.

Put simply, excess liquidity is the cash which financial institutions deposit with the Fed, and broadly equals the Fed’s assets minus some of its liabilities. Those assets are the securities it has bought and the loans it has provided – both of which have shot up throughout the pandemic. Its liabilities include a variety of things, but are mostly cash in circulation, deposits held in Federal Reserve banks as well as the US Treasury’s cash holdings in its Treasury General Account (TGA).

The one responsible for the fall in excess liquidity is the latter. Over the last couple of months, the US government has increased its holdings at the Fed by an astonishing amount. As the chart below shows, the cash in the TGA spiked up to $1.8 trillion, and at now stands at $1.7 trillion. 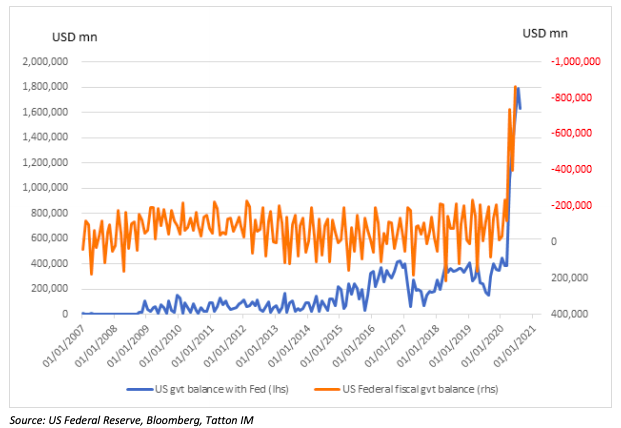 When the Fed buys assets (usually US Treasury debt), it generates cash. But should the Treasury choose to keep some of the cash in its coffers, less ends up circulating in the real economy and the financial system. As is well known, the Treasury has been borrowing huge amounts from bond markets in order to fund its emergency fiscal stimulus. But lately, instead of pushing its available cash out to the real economy, the government has been building up its cash reserves.

With the US economy still needing substantial support to see it through the crisis, this cash hording is, on the face of it, bizarre. As such, the multi-trillion-dollar question is: When, if ever, will this money be released into the real economy? This is a question we, and many others, have been looking into for some time – and to answer it we need to understand why it is there in the first place.

Some of the reasons for the government’s impressive cash pile are circumstantial. For example, many tax payments were deferred because of the pandemic, and those that have now come in are piling up in the TGA, given that the US central bank also acts as the government’s ‘house’ bank.

On the whole, however, the Treasury’s cash piling appears to be planned, with the main reason being money management. The government’s fiscal response to COVID has been extraordinary in both its size and speed – even though the US Congress has recently struggled to deliver new measures. To ensure it has the flexibility to keep delivering, the Treasury needs a substantial cash balance. What’s more, it looks likely that the US government will have to convert many of the emergency loans it handed out to small and medium-sized businesses into grants. As such, it will need enough on its balance sheet to make the cash transfer. In short, the Treasury is making sure it plans for a rainy day.

There are also bureaucratic reasons, but they appear minor. By law, the Fed is only able to buy a very limited set of assets – mostly US Treasuries and mortgage-backed securities. By creating off-balance-sheet vehicles (SPVs), into which the Treasury pays some equity capital, the Fed can purchase private sector securities. And this equity capital sits also on the Fed’s liabilities side.

So, what does all this mean for where the money will end up? Most analysts agree that the Treasury’s extraordinary cash pile will come down – meaning more money circulating in the real economy. In the short term, this tends to do more good than harm. But just as important for how the economy fares is the level of yields in financial markets. Low nominal yields have supported risky assets in the market, and have also – together with rising inflation expectations – pushed down real yields in the market. We have written about the latter in the past; as long as this persists, the ‘reflation’ trade prevails. The government’s actions on the bond supply side (through its bond issuance) and the demand side (through its fiscal spending) are vital in determining yield levels.

By having a pile of cash on hand at the Fed, the US government makes it much less likely that it will have to issue more bonds and cause a spike in yields through this draw on capital markets. That is good for riskier financial assets (equities) and for the underlying US economy. With the economy still reeling, and an election approaching, we can be confident that – one way or another – the money will be released at some point. When it does, it should filter through financial markets and into the real economy. That is certainly a positive.