Touch of Goldilocks at the end of May 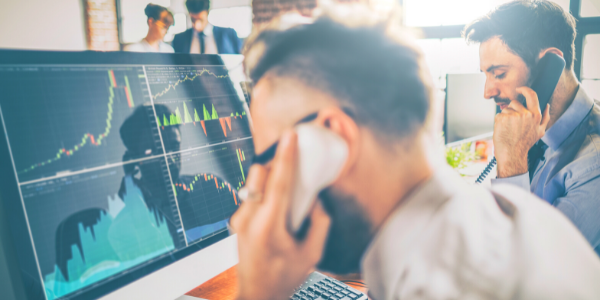 After a strong April, May felt somewhat of a mixed bag for investors, particularly when stock markets suffered a correction in the middle of the month. However, as the month draws to a close, it is mostly only cryptocurrency holders and those who had banked on a warm and sunny May in Northern Europe who are still feeling the pain. For globally diversified investors, May is drawing to a more amicable close which counterintuitively has been driven by expectations of lower, not higher growth.

The 2021 sell-off periods so far have all been driven by concerns that economic growth may return with such a vengeance that supply bottlenecks would cause inflationary pressures – which in turn would drive up bond yields or press central banks to withdraw the ‘punchbowl’ of ultra-low rates before a sustained recovery has been established. We discussed previously how the competition of higher bond yields raises the hurdle for equity valuations, which means that in order for share prices to remain high and rise further, corporate earnings growth has to top rising bond yields.

On both inflation and the potential for central bank error, the last weeks of May brought welcome relief to capital markets. The US Federal Reserve (Fed) struck the right tone with a very measured appraisal that made clear that it would neither be blind to the fragile nature of the post-pandemic recovery path nor to the overheating risks should conditions improve faster than anticipated.

On inflation, various survey data points suggested inflation expectations have not increased despite quite marked price rises for certain goods. Neither have wage rise expectations – which would allow higher price levels to persist and turn them into structural inflation. On economic overheating fears, the Biden administration’s apparent willingness to settle for lower overall spending volumes, to expedite Congressional approval of fiscal stimulus packages, lowered near-term growth expectations that therefore lowered the temperature there as well.

Political noises may have been higher over the past week, but the quieter tones from the economy were supportive for capital markets and allowed them to rise gradually.

Market-relevant political risks were apparent around both Russia and China. They have been for some time and only intermittently impact on their currency, bond and equity markets. So, this week was notable in that there were little or no discernible impacts. The Renminbi/Yuan strengthened and the Rouble was a tad stronger on the week as well. We also show the South African Rand in the chart below, strongest among emerging market currencies and a country we write about in one of this week’s in-depth articles. 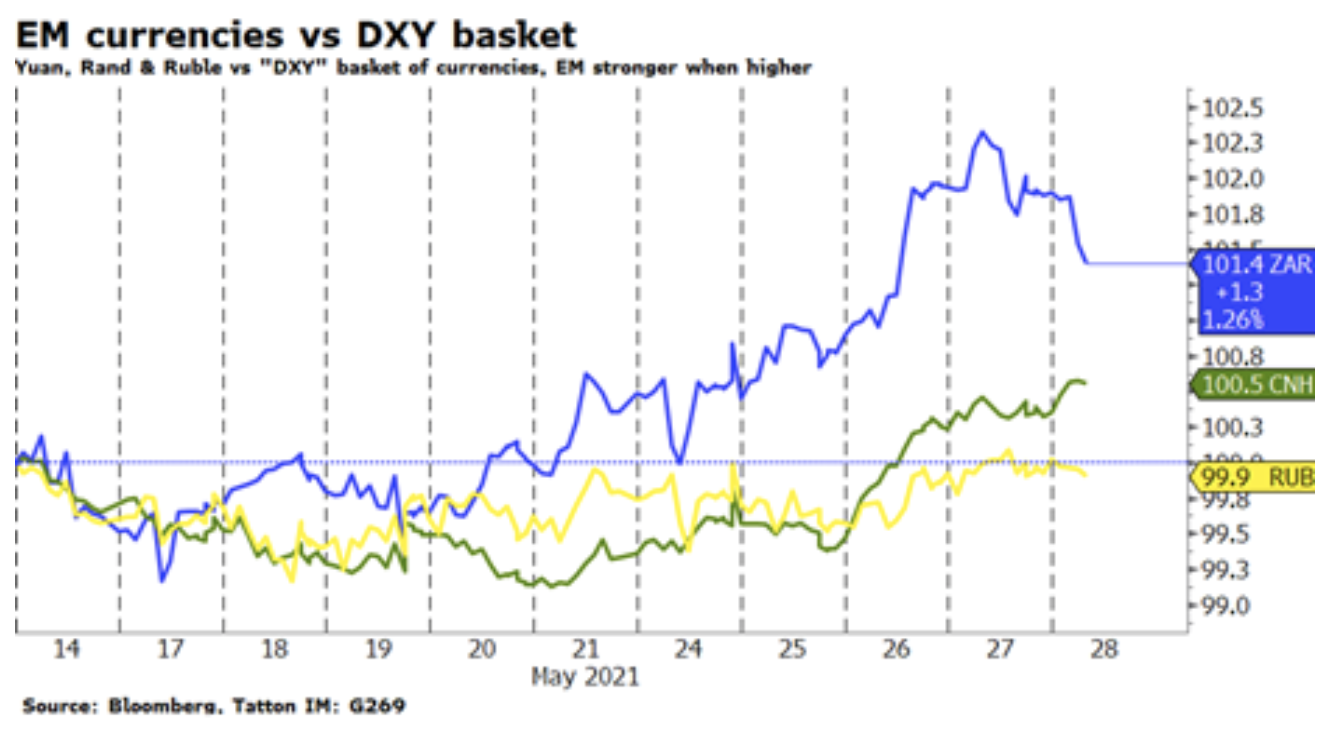 President Lukashenko of Belarus (Putin’s mini-me?) showed us all quite how much respect he affords to international rules, after an act of state-sponsored plane hijacking to secure the arrest of a Belarusian journalist. The nations north of Belarus are getting decidedly nervous but that fear is not shared by markets, which may have taken more note of how European Union (EU) member states were able to join forces quickly to express widespread condemnation.

China indicated yet again that markets are absolutely ‘free’ – as long as they do what the Chinese government wants. Cryptocurrencies and commodities bore the brunt of the tightening regulatory pressure at the start of the week. As we have discussed before, western investors appear to be somewhat ambivalent about domestic Chinese market interference. The new rules and oversight could be seen as over-the-top, but the west has regulation too. China’s policymakers are determined to ensure domestic stability and recognise that their previous approach of direct “approve or deny” meant a near-free-for-all in any market they approved. Setting out boundaries through regulation is now seen as more preferable, and differs from the west only in the extremity of the punishment. If anything, such regulation could mean fairer treatment and more transparent markets for all investors. Foreign investor flows into Chinese assets appear to have picked up after the outflows of a couple of months ago.

Of course, there is an interesting conundrum at play. Tightening controls also might mean more stable but slower growth – which China is definitely showing some signs of. Interestingly, the strictures on commodity “speculators” seems to be because steel manufacturers have been caught in a bind.

The Chinese authorities are not just constraining the commodity markets; they are also constraining the demand. They have pulled back the availability of credit in the economy after the immediate post-virus surge, and this could be a potential problem for wider markets. So-called ‘credit impulse’ (credit growth relative to overall GDP growth) is now negative, and will decline further. Despite all these containment measures, Chinese equities still enjoyed one of their best weeks for a while.

As a rather changeable May takes its leave, we can at least end the month with renewed optimism that meaningful – if uneven – progress is being made. Markets this week have shown a clear (although perhaps unsurprising) preference for stable, more profitable growth rather than boom-and-bust.