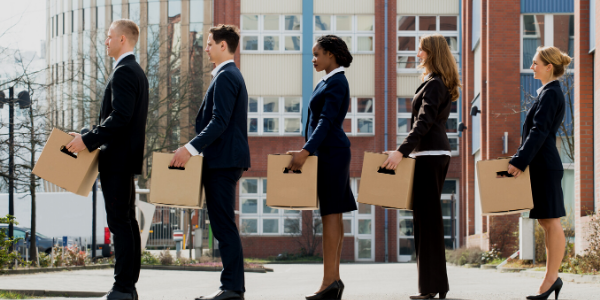 The labour market will be at the heart of a post-pandemic economic recovery. We are in the middle of Britain’s sharpest recession in hundreds of years, but this is not any normal downturn. The virus and repeated lockdowns have reduced demand and, once restrictions are substantially eased, activity will certainly rebound. But the induced recession can easily turn into a ‘classic’ recession, with its hallmark of low consumer demand, defaults and deflation and especially high unemployment. The UK Government is spending billions on furlough payments and other subsidies to prevent unemployment from spiralling.

Keeping an eye on the labour market is therefore a vital part of assessing Britain’s economic outlook. On that front, headlines this week were both a little gloomy and somewhat encouraging. 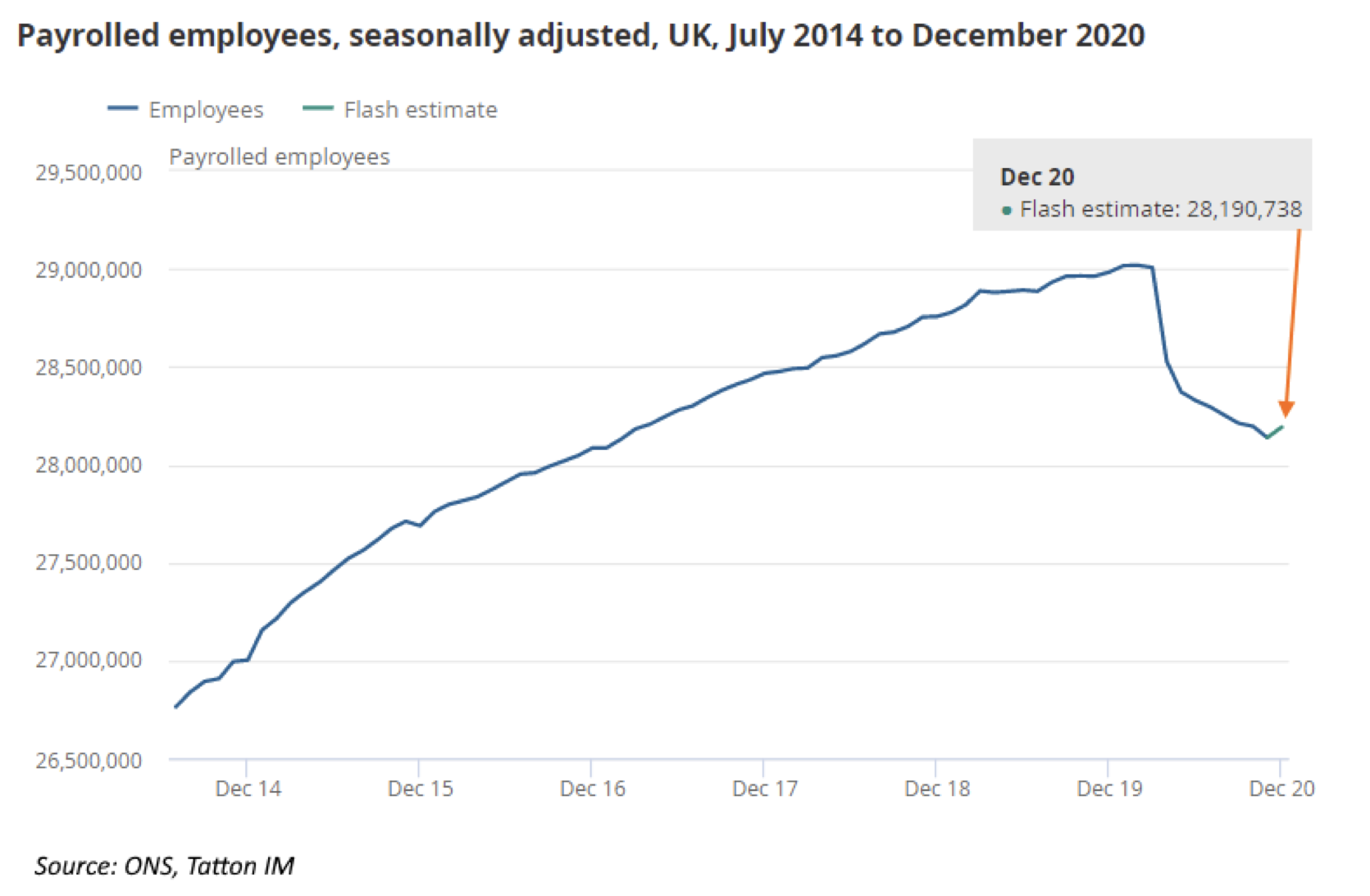 According to the Office for National Statistics, the UK’s unemployment rate rose to a four-year high in November, while the number of redundancies was similarly high. But the actual figure was more comforting: 5% (1.72 million) of Britain’s workforce looking for a job were unable to work in the three months to November (as per the international definition of unemployment), 0.6% higher than in the previous quarter and 1.2% high than the year before.

For the worst recession in living memory, that is not a bad statistic – and better than expected. More granular weekly data, not used in the survey on which the unemployment data is based, suggest that the biggest chunk of job losses came in September and October, while the number out of work remained mostly flat in November. Redundancies seem to have peaked, with rates holding steady into the end of the year. The PAYE source even suggests payrolls have started to tick up, as shown below.

With the vaccination programme well underway, and the second half of the year looking brighter than the first, this is a decent enough starting point.

As always, there are complications to the picture. The Government is still handing out billions of pounds in furlough payments to around 3.82 million furloughed employees (some 11% of the workforce – see chart below) and, with an indefinitely long economic shutdown again underway, this will almost certainly need to be extended at the Chancellor’s Spring Budget. Such fiscal cushioning makes labour market fundamentals hard to assess. The jobless increases in September and October, for example, came as businesses were told emergency support would end – with unemployment only falling when the Government reversed its decision in November. 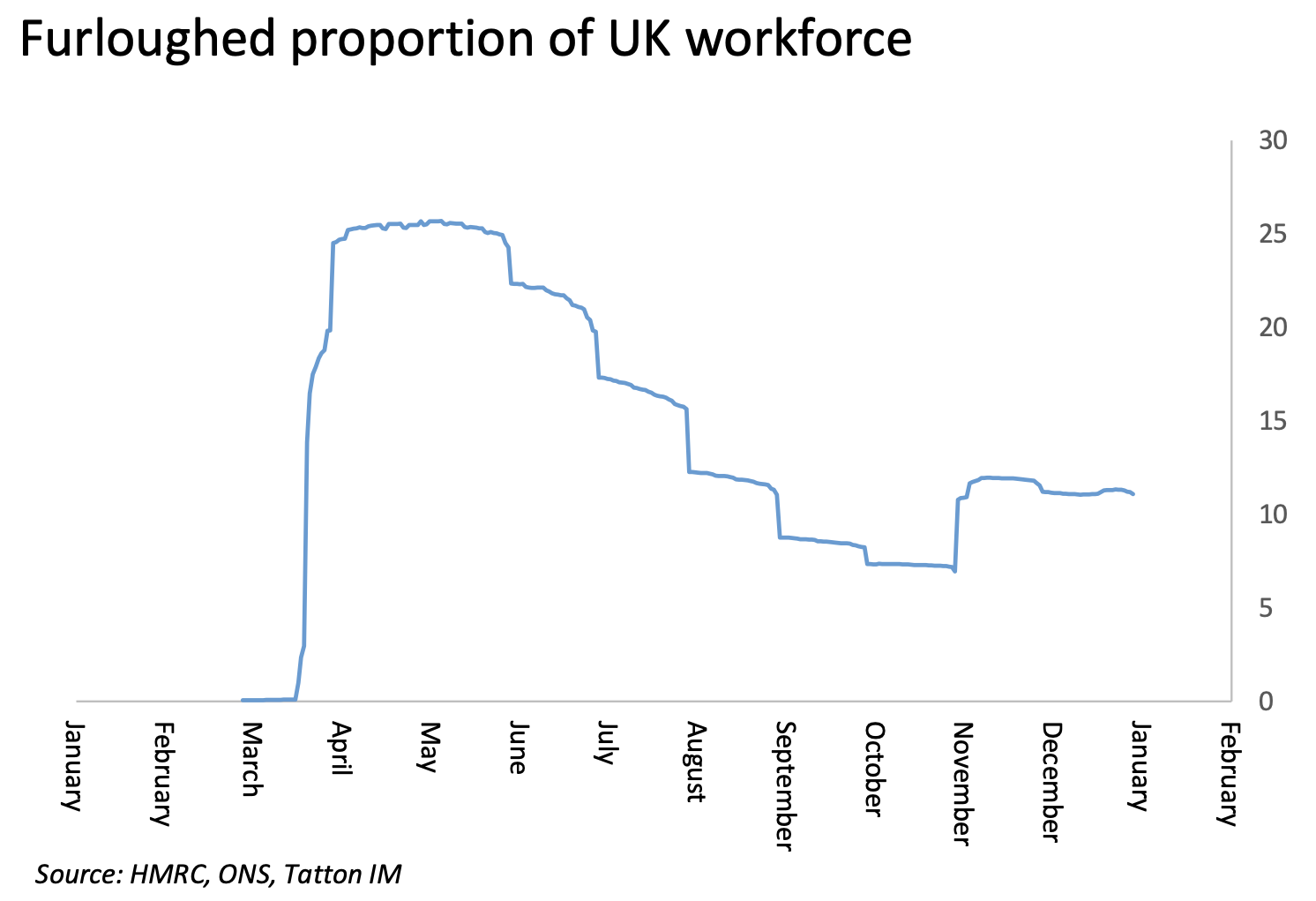 Another aspect arises around ‘migrant’ workers. According to research from the Economic Statistics Centre of Excellence, 1.3 million foreign-born workers (close to 2% of the workforce) left the UK between July 2019 and September 2020. Brexit impacts and a COVID-ravaged economy forced the exodus, which hit London’s ‘domestic’ demand particularly hard. Almost 700,000 of leavers came from the capital, meaning London lost nearly 8% of its population in just over a year, hitting the businesses supplying their day-to-day needs.

In normal times, this free flow of labour could be a positive for businesses, suggesting a workforce pool able to respond dynamically to decreased demand. But with post-Brexit immigration rules and no clear end to the pandemic in sight, this could become a permanent demographic shift, leading to a shortage of labour. That would be difficult for businesses, but the remaining workforce should benefit relatively. And, once an economic recovery is underway, you would expect Britain to be able to attract labour from elsewhere if needed. But politics complicates the situation. With its new points-based immigration system, the Government may not be quick enough to spot supply gaps, or be able to replicate the benefits of market forces regulating a natural free flow of people.

There are also concerns about the disparities in the labour market. For those with stable employment and a stock of pre-existing savings, the pandemic has been mighty kind to their balance sheets – helped by Government support schemes and enormous monetary easing from the world’s central banks. Those without such a cushion have struggled, with only a fraction of their wages being paid and no job prospects to be found.

Age disparity is another big factor. For at least 30 years, the demographic that benefitted most from growth in employment has been the over-50s, with an increased share of the workforce and disproportionate share of wage growth. So, in absolute terms, it is no wonder that jobless claims from this older cohort has increased.

Relatively speaking, however, the under 50s – and particularly under 25s – have been hit hardest, with unemployment increasing the most in those categories since the pandemic. There are many reasons for this, with younger workers much more likely to be employed in virus-hit sectors like hospitality, as well as having less stable or senior positions. But the result is a more uneven labour market and greater inter-generational inequality.

Inequality between age groups was a theme long before the pandemic, but like many issues, it has been accelerated by the virus. The perceived direct health threat from the virus is clearly lower for younger people, and yet in aggregate they have shared a heavier economic burden and will be last in line to receive vaccinations (and perhaps even the last to regain old freedoms). This is likely to increase the political divide between generations that has become so acute in recent years, with the potential of leading to a boiling over of tensions, towards social unrest as we saw in the Netherlands earlier this week.

Addressing these problems is no easy task, but an extension of furlough and other emergency support schemes is sure to be the first port of call. The silver lining to the grim 2021 we have had so far is that the virus has forced Government budget hawks back into retreat. But unfortunately, emergency support will have to be withdrawn sooner or later. At that point, we will see the full extent of the damage to Britain’s labour market. Until then, policy will be key to avoiding the worst of it.