Can the Fed redress a 40-year imbalance between workers and savers? 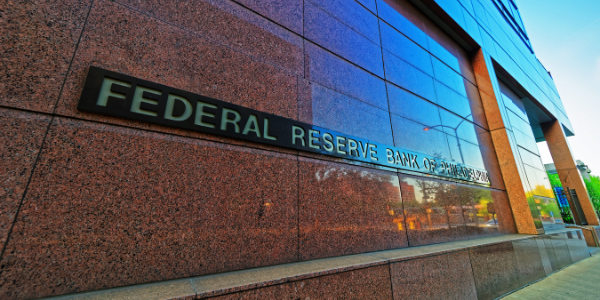 Who does monetary policy work for? The simple answer is everyone, but given that one of the defining aims of a central bank is to ensure monetary and financial stability, perhaps a more historically accurate answer is savers (owners of financial assets). Through interest rates and other means, central banks hope to provide a stable monetary base and steady rate of inflation – thereby ensuring individuals’ savings maintain their value in the face of rising prices.

Most monetary policymakers target inflation, but – unlike other central banks – the US Federal Reserve (Fed) has another objective in its ‘dual mandate’: ensuring full employment. Its explicit aim is to balance the needs of the US labour market and achieve stability in overall prices. As such, its monetary policy is supposed to work not just for savers but for workers too. Sometimes, though, one of the two goals will have to take precedence.

Lately, the balance of priorities has swung definitively toward workers, or rather towards employment income over income from financial assets. Last month, the Fed announced a new framework for monetary policy, opting for a ‘symmetrical’ inflation target of 2% over the long term. And this week, the Federal Open Markets Committee (FOMC) announced that it does not expect interest rates to rise above current non-existent levels until 2023. Crucially, chairman Jay Powell declared that the Fed would not consider lifting interest rates until full employment was achieved, and inflation was set to run above 2% for some time. By committing to a ‘lower for longer’ policy on interest rates (see chart below), the Fed has effectively said it will tolerate the economy running hot if that is what it takes to ensure jobs. In other words, to improve income levels from employment, the Fed is willing to undermine the purchasing power of savings where returns are more or less tied to their near 0% interest rates policy (i.e. bank deposits and government bonds) and thus below the 2% rate of inflation they will tolerate without intervention.

In terms of short-term policy, it makes little difference. With the US economy still reeling from a global economic shutdown, everyone expected interest rates to stay at zero and for monetary policymakers to keep pumping liquidity into the financial system. Nonetheless, the framework change is significant, because it formalises a shift that began before the Covid crisis. Although setting a policy that works for both savers and workers has always been the Fed’s mandate, for several decades now there has been a sense that the Fed has a disinflationary bias. in other words, some feel the Fed has favoured savers’ interests over wage earners’.

This stems from the historical observation that when employment had risen and signs of wage increases came through, the Fed was quick to quash what it saw as potential inflationary pressures. But over the years, the dangers of this approach have become increasingly apparent. As the experience of the post-financial crisis era has shown, low unemployment need not quickly cause higher inflation. The suspicion was that in the era of globalisation, employment was simply too weak to give workers the power to negotiate higher wages. By tightening monetary policy in response to rising employment, central banks have been accused of prioritising monetary stability over the labour market.

Part of the new framework from the Fed is a further recognition on its part that monetary policy is not politically neutral. In his annual speech at this year’s virtual Jackson Hole conference of central bankers, Powell noted the problematic ways in which employment is counted. For the last ten years, the unemployment rate has fallen consistently. However, due to rising non-participation rates (people basically giving up trying to find work), overall employment has not seen a corresponding gain. The Fed Chairman went as far as to say that the ‘real’ unemployment rate might be 3% higher once these factors were taken into account.

The idea of monetary policy having adverse social effects is nothing new. Many have suggested that it was in fact the looser central bank policy that contributed to growing wealth inequality over the last decade, by inflating asset prices to benefit of those with capital, while working conditions stagnated. Traditional savers also felt left out as record low interest rates did not provide any stream of income. Looking over the longer term though, it is not just wealth and income inequality that has been boosted, but also a distinct increase in generational inequality.

To put this deep and complex topic into as simple terms as possible, with the onset of hyperglobalisation in the 1980s, the returns to labour fell significantly lower than the returns to capital. Naturally, this benefitted those already with capital – earned in the thriving post-war labour market – who could then afford to buy assets that would give them healthy returns down the line. With wage growth further suppressed by increasing global labour competition, this has left house prices and other financial assets out of reach for many younger people. The chart below shows that real (inflation adjusted) net worth among different age groups has diverged substantially since the late 1980s. 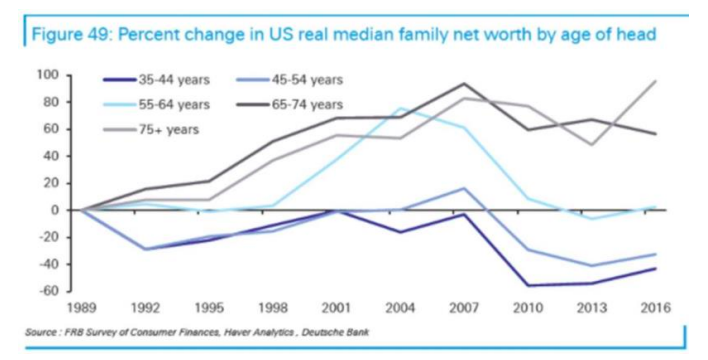 This generational divide of wealth has undoubtedly contributed to the increasingly wide political gap between old and young. The Fed, along with other central banks, is keen to avoid widening this gap through its policies. But monetary policymakers also recognise this is not something that can be achieved by central banks alone. In recent years, Powell and other central bankers have been actively pushing governments to expand their fiscal policies to improve the economy for all. The pandemic has only emboldened that drive, and massive spending programs now look like the norm throughout this crisis and beyond. Fiscal focus is also likely to shift from state-financed support and investment to income redistribution via taxes and transfers.

This shift to making monetary (and fiscal) policy work for wage earners should not scare investors. For yield seekers, rates can only rise on a sustained basis if the economy is strong enough, and financial asset markets can only thrive if there is a dynamic economy alongside them. After all, if one age group needs to sell its assets to fund their retirement, only to find no one in the younger generation has the money to buy them, those underlying assets will see a sharp and damaging price reversal. One way or another, imbalances will be corrected. But with a steady change of monetary framework and fiscal policy, that correction can be orderly and benign.

Here, we suspect, lies the deeper transition for the Fed. In the post-pandemic world, inflation may not only be a spur for growth, but also potentially a rebalancing tool between age groups. We are unlikely to see the effects of this framework take effect soon, but it seems the Fed has recognised the importance of wage earners feeling the benefit of its policies more strongly than it has over the past two decades. Monetary stability may otherwise prove to be a fool’s errand if political and societal instability sewn by imbalances between the generations reaps destructive upheaval.