Brazil and South Africa – a tale of two BRIC countries 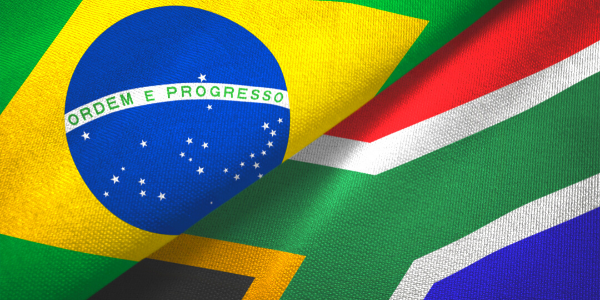 Those in the investment world are probably aware of the BRIC thesis brought forward by Goldman Sachs economist Jim O’Neill two decades ago. O’Neill suggested the high growth potential of emerging markets Brazil, Russia, India and China would ensure their weight in the world economy would rise substantially over the next ten years. But his prediction was about more than just backing the right horse. The belief was that, with the centre of global growth shifting, political institutions and the global order would have to shift too. Sure enough, by 2009, the largest four countries met regularly on a political level, and a year later, after intense lobbying, South Africa was invited to join the regular BRIC(S) summit.

With the benefit of hindsight, BRICS is not the most obvious of groupings, economically speaking. Each country has its own strengths and weaknesses that should make it unlikely they would rise and fall together. There are two, though, whose economic performance has been remarkably similar: Brazil and South Africa. This is a little surprising, given the distance and differences between the two countries. And yet, as the chart below shows, the trend in both country’s growth levels has tracked incredibly closely over the last few decades – albeit with a bit more volatility on the Brazilian side.

When looking at the composition of their economies, Brazil and South Africa are structurally very similar. Both are heavily dependent on commodities and semi-manufactured goods, making them sensitive to the promises and pitfalls of the commodity cycle. Brazil’s primary commodities – including semi-precious and industrial metals, oil and food – make up 55% of its exports. Meanwhile, metals and minerals account for around 60% of South Africa’s exports.

That commodity reliance is helping both countries right now. As we come out of the pandemic, markets are expecting a boom in global trade and infrastructure building (which we are already seeing in the US). This places global inflation at the top of the agenda for the first time in years. Domestically, inflation has and will likely continue to make some problems for many emerging markets. Brazil and South Africa are no exception here, but a bout of inflation – together with strong global demand – should be a boon in the medium term. In South Africa, the global commodity boom has brought on a surge of export growth – bolstering investor sentiment and strengthening currency values. Since the beginning of the year, the Rand has clearly outperformed the Brazilian Real, even if the latter started gaining some ground over the last month.

As with many emerging market countries, virus concerns have dampened optimism. This is particularly true for Brazil, which has the world’s second highest official COVID death toll. Thankfully, in both Brazil and South Africa, case numbers and deaths have been on a continual downtrend since the winter and early spring peaks. Even more encouragingly, vaccination programmes in both countries are now well underway – greatly lessening the likelihood of a third wave. With falling virus cases and increasing vaccinations, both have been able to loosen restrictions – giving a much-needed boost to sentiment.

Positivity from international investors is creating a positive cycle. With restrictions easing and global growth looking supportive, money has flowed back into Brazil and South Africa – and that outside investment is itself boosting domestic growth expectations. This will be a big help for their governments in particular, as both have a similarly high debt-to-GDP ratio, and both have bond ratings just below investment grade.

One of the big positives is that both governments stepped in to provide substantial fiscal support through the pandemic – with Brazil using more of its perceived fiscal leeway than South Africa. But this factor brings one of the key differences (in investment terms) between them into focus. While political stability seems to be improving in South Africa – thereby support the growth outlook – the same cannot be said for Brazil.

South African President Cyril Ramaphosa recently strengthened his position by forcing his African National Congress (ANC) Party’s secretary-general to step aside. Aside from merely expelling a former Zuma ally and potential rival, the move has been seen by many as a step forward in South Africa’s anti-corruption campaign. Institutional stability are always crowd pleasers for emerging market investors, so Ramaphosa’s actions have been good for economic sentiment and the stock market, which has locked in gains of around 14% since the beginning of the year.

In Brazil, meanwhile, equities have merely managed a 4% upside. Right-wing populist President Jair Bolsonaro is gearing up for another election campaign next year. The polarising figure came to power on a platform of anti-corruption a few years ago, but his tenure so far has been marked by controversies and corruption allegations of his own.

Investors recently feared he would pressure Brazil’s central bank into keeping interest rates low – in a bid for political popularity. With domestic inflation pressures rearing, that would have been a bad sign. Fortunately, the central bank raised rates recently – making it clear it is focused on delivering price stability.

For markets, while Bolsonaro’s biggest drawback is his unpredictability, there are also doubts as to the extent he can reform public finances and improve the country’s languid tax base, which is half of South Africa’s as a percentage of GDP. It is also incredibly complicated. According to Bank of Santander, in 2017 an average Brazilian company took nearly 2,000 worker hours to complete its annual tax return in comparison to 175 hours for a US company. Bolsonaro has recently tried to push forward reforms in this area, but has been limited by the country’s political apparatus. And now it is entering an election phase, as with other economies in Latin America, doubts persist. As the incumbent, Bolsonaro may not be ideal, but the prospect of a ‘left’ leaning government – which may fail to put public finances on a more sustainable path – is not enticing for investors either.

The political difference is most likely why the Rand has performed 25% better than the Real in recent years. But in a world that is slowly recovering from the pandemic, and has high commodity prices, things look bright for both of the two smaller BRICS. However, their diverging paths illustrate once again how heterogenous emerging markets behave, with policy developments again playing a key role.