US bankruptcies: expected but not altogether undesirable

As we have written many times, the deepest global recession in the post-war period is no ordinary one. With activity suppressed by government diktat, it is hard to gauge how much of the plummet in demand is ‘real’ and how much is just a – hopefully short-term – virus response. To judge where the forced recession ends and the ‘classical’ recession begins, we need to pay close attention to the hallmark of all economic downturns: bankruptcy.

Recent news has been uncomfortable. Large corporate bankruptcies in the US are now running at a faster pace than ever. So far in 2020, 157 US companies with liabilities of more than $50 million have filed for Chapter 11 bankruptcy, beating the record-setting years after the dotcom and financial crises. Insolvencies among bigger businesses – those with liabilities over $ 1billion – have not yet reached the 2009 peak. As the chart below shows, the pace of the bankruptcy filings is running quicker than 11 years ago, with 45 big companies becoming insolvent already this year, and analysts expecting more to follow. 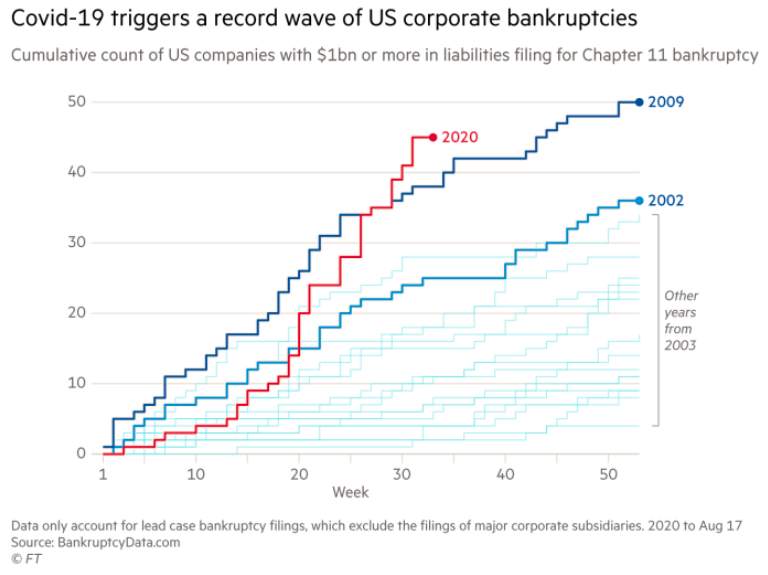 A few months ago, we saw the high-profile bankruptcy filing of car rental company Hertz, while other big American companies to file for bankruptcy include energy company Chesapeake and department store (and 118-year-old household name) JCPenney.

Clearly, a global pandemic and an economic shutdown makes normal operation difficult for any company, but the wave of bankruptcies we are seeing – despite trillions of dollars being poured into the economy through government aid programs – speaks volumes about the lasting impact of Covid-19. And with President Trump now set to cut the government’s $600-a-week emergency unemployment support in half, bankruptcy filings are unlikely to let up anytime soon – especially if virus cases continue to spike across the US.

So, is this good or bad for the US economy? Charles Dumas of investment research group TS Lombard made some excellent points in a piece published this week, exploring why these bankruptcies are happening, and what effect they are likely to have.

Widespread bankruptcies among small or medium-sized businesses can be extremely detrimental to an economy – given the more direct impact on incomes – but for larger companies, allowing some to go under is not necessarily a bad thing. For an economy to show dynamism and growth, some level of ‘creative destruction’ – where unproductive or unsustainable companies die out and make room for more productive ones – is needed. Without celebrating the demise of Hertz and its ilk, at a certain point, businesses must be able to fail.

In fact, one of the main concerns with governments’ blanket support measures has been that they would allow failing companies to carry on without a sustainable long-term business model. The pandemic may have been the nail in the coffin for Hertz and JCPenney, but both companies were struggling long before the first virus case arrived on America’s shores. The fact these companies have been allowed to go under suggests creative destruction is still working.

As noted previously, the pandemic seems to be accelerating many themes that were already in play for a while. For example, the onset of the global economic shutdown coincided with a total collapse in oil prices and, sure enough, a big chunk of the US corporates filing for bankruptcy have been from the oil and gas industry. The trials and tribulations of the retail sector – with physical shops struggling to keep up with competition from Amazon and the like – have also been going on for over a decade now, so it is no surprise to see retailers struggling.

Arguably, the 12 years since the financial crisis and ensuing great recession have set the stage for a raft of corporate bankruptcies. For years, analysts have bemoaned ‘zombie’ companies that are kept afloat only by the cheap credit that the world’s central bankers have created. Many also cite this as one of the reasons for the sluggish productivity growth seen over the last decade. With the economy unable to shake off its dead weight, growth could only grind upwards.

Indeed, bankruptcy law is perhaps one of the reasons the US economy has historically zoomed ahead of its developed world peers. Chapter 11 bankruptcy is not the end for a firm, but a reorganisation of its finances and business affairs. In fact, American businesses filing for Chapter 11 are often able to carry on trading, sometimes even coming back stronger than before. US bankruptcy law has apparently been so successful that policymakers in Europe and the UK have even tried to emulate it – to reproduce America’s impressive productivity growth (see chart below).

From an investment perspective, this productivity and focus on effective corporate structure has benefitted US markets. US corporate earnings growth have outperformed other regions over the long-term. Allowing companies to go bankrupt – but restructure operations to become more sustainable – could be a big part of this. As such – and as long as bankruptcies stay in the big business world rather than the small – a little creative destruction is nothing to be scared of.