US election: Joe is no longer Biden his time 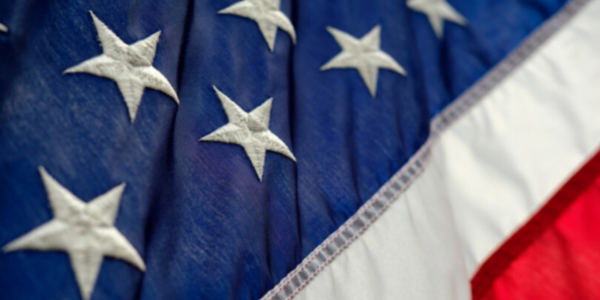 Americans head to the polls in just under four months, and as we edge ever closer to the election, presumptive Democrat nominee Joe Biden’s lead over Donald Trump has grown steadily wider. According to the latest figures from FiveThirtyEight, the former Vice President has the support of 50.3% of the US public, while the current President is polling at just 41.2%. The somewhat arcane Electoral College system means that lead is not insurmountable, but opinion polls in several key swing states have consistently placed Biden ahead of his rival for some time. This has been reflected in betting markets’ implied probability of a Trump victory (see chart below) – which hit a high of 60% at the end of March, but has steadily declined since then, sinking to current lows of around 35%. 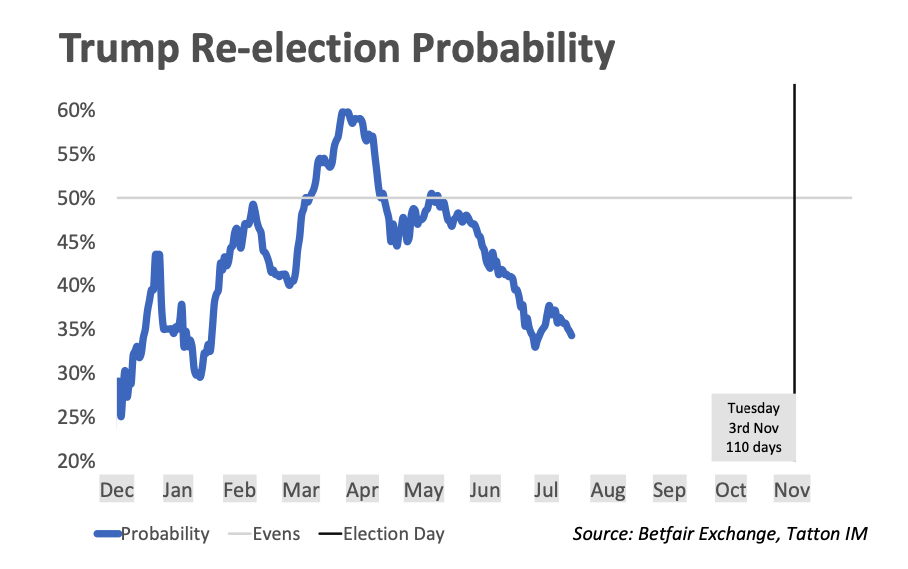 The conventional wisdom is that capital markets like Republicans and dislike Democrats. Trump himself has often alluded to stock market performance as a reflection of his Presidential performance, frequently talking up markets throughout his term.

The post-Nixon Republican policy recipe has included a big pinch of tax cuts and deregulation, while the Democrats’ has been more or less the exact opposite. Sure enough, these traditional partisan priorities are reflected in this year’s candidates. Trump made large tax cuts a central policy of his first term in office, while Joe Biden has promised to partially reverse that cut should he win in November. But there are complications to this conventional picture. First, the pandemic and its consequences are now the top issues for voters, with other concerns fading into the background.What’s more, despite the apparent political chasm, the two political parties are strikingly similar on many of the key issues for markets.

The Democrats have now joined Republicans in both being explicitly anti-China, wanting to focus less on free trade and more on industrial policy, and agreeing that some kind of fiscal easing is needed. On the fiscal side, Biden’s investment and infrastructure improvement plans look more ambitious than his opponent’s – potentially to the economy’s benefit. And beyond policy, Trump’s erraticism has often made investors squeamish over the last four years, with the President often flip-flopping on big decisions at the push of a tweet.

Last week, Biden announced a $2 trillion spending plan for his first four years in office (the details came this Tuesday). Crucially, these measures come on top of emergency support schemes, and are focused on long-term issues like clean energy, productivity and domestic industrial policy. This massive infrastructure push – as well its green tint – surprised even the more progressive wing of the Democratic party, many of whom had pegged Biden as a status quo centrist. It also received significant support from party moderates, the media, business, even from centrist Republicans. The US economy has been suffering from a crumbling and outdated infrastructure for years, and while Trump has repeatedly pledged to spruce up the nation’s infrastructure, he has yet to make good on his promises.

Meanwhile, capital markets have been nonchalant about the election odds. While Biden’s chances of victory have improved substantially over the last few months, the rally in equities has continued. Despite all the pandemic and political fear and uncertainty around, the S&P 500 is now back up to where it was towards the end of last year, having risen an astonishing 44% since the lows of March.

Even supposedly ‘tax sensitive’ US stocks have been relatively unaffected by Biden’s now impressive lead. These firms saw the biggest increase in corporate earnings following Trump’s 2017 tax cut, and would seemingly have the most to lose from Biden’s hiking of the effective corporate tax rate. Researchers at Goldman Sachs put this down to the uncertainty around future policy. Goldman Sachs currently estimates that Biden would lift the tax rate for S&P 500 companies by about 4%, which in turn would knock about 5% off profits. Before the Biden spending proposals were made public, Goldman Sachs estimated there would be a further 5% due to a tax-rise-induced slower economy.

We suspect that current market prices reflect at least some tax rise prospects, however. Investors know that Biden would claim back a chunk of corporate profits in tax (most likely concentrated in the large tech companies, which have so far managed to avoid significant taxation). And, with the former VP now odds-on for the election, it would be quite a stretch to imagine that current equity prices are completely discounting the chance of a tax hike. Perhaps the prevalent view is that efforts to restart the post-COVID economy would prevent a Democrat-led administration being able to completely reverse Trump’s corporate tax ‘gifts’, which would risk undoing much of the US Federal Reserve’s monetary stimulus support. Corporate tax as a proportion of total tax revenue thus could remain the same for the time being, but corporate taxation rules may instead become more central to industrial policy – and more closely tied to the investment and infrastructure aims.

There are other reasons for markets’ sanguine take on a Biden presidency too. While some of Trump’s policies have undoubtedly been a boon for corporates, he has little room to enact more of the same. Over the last four years, he has already handed markets all the gifts he can. Further tax cuts might be seen as handing money to those who already have it.

It is interesting that Biden has come out with a plan of this size. Until now, his campaign tactics have largely been to lay low and soak up votes from a public increasingly dissatisfied with or embarrassed by their president. This has allowed him to say relatively little on the policy front, while Trump makes his own problems. It seems to be working. According to FiveThirtyEight’s poll, the proportion of Biden supporters who are strongly anti-Trump is 80%, while the proportion of Trump supporters who are strongly anti-Biden is under 54%. Much is made of the supposed enthusiasm of Trump voters, and the comparative apathy of Biden voters. But Biden supporters are in fact very enthusiastic; they are just enthusiastically against the President.

In his first major policy announcement, Biden has come out swinging. It might have been easy to simply toe the centrist line and wait for more White House slip-ups. Instead, he has nailed his progressive colours to the mast on taxation, fiscal spending and climate change. As the election gets closer, we should expect more of the same. The market is therefore likely to become more sensitive to Biden’s policy plan announcements. At the same time, any significant coronavirus development (be it positive or negative) is likely to ‘trump’ political developments, even if the latter are bound to have a long-term impact on the US electorate and geopolitics.