US election – the dust finally starts to settle 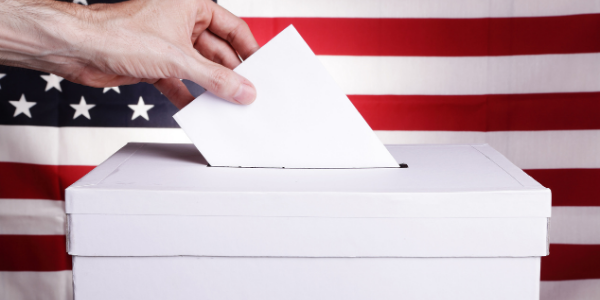 The American people have spoken; it just may take a while to figure out what they said. Since voting closed on Tuesday night, the US election has been nothing short of a rollercoaster. When initial results started filtering through, it looked like predictions of a comfortable Joe Biden victory were well wide of the mark. Far from a landslide, the night turned into a nail-biter, with early result tallies suggesting President Trump may have edged it. This picture started to change on Wednesday, when the count of mail-in ballots (postal votes) in key swing states gathered pace. Trump-friendly Fox News was the first to call Arizona – a long-time Republican stronghold – for the Democratic challenger. With victories in Michigan and Wisconsin, and growing leads in a few other swing states, a path to victory for Biden began to clear.

Counting progress from then on has been slow and at the time of writing on Friday, the gap has narrowed further in favour of Biden, but the key swing states of Nevada, Pennsylvania and Georgia remain too close for us to be definite. However, despite this knife-edge situation, the US press across the entire spectrum is presenting a Biden win increasingly as the inevitable outcome.

Unsurprisingly, Donald Trump described the direction of the counting results a fraud during a bizarre press conference, despite knowing full well that the trend reversal had everything to do with the fact that he discouraged his followers from using postal votes, while the Democrats did the opposite to address COVID infection concerns. As a result, the votes now being counted are most likely those that came in first.

For capital markets, uncertainty is usually the most-feared part of the election process. Therefore, there has been some surprise following the at-first sanguine – and then outright positive – reaction from capital markets to the unfolding drama over the course of the week. As we have written before, markets on the whole have appeared ambivalent between the presidential candidates – albeit with differing prospects for differing sectors. The danger has always been a close and contested election with legal challenges and civil unrest lasting weeks or months. In that respect, the President’s actions so far – a premature victory declaration followed by legal challenges and orders to stop counting votes – have undeniably raised pulses. Some unrest has occurred, for example in Portland, Oregon, where emotions have been running hot for months. However, for the most part, feared disruption around polling booths and in the streets has not materialised. Commentators have pointed to this relative quiet to explain at least the initial market reaction – last week’s market declines seem to have priced in more trouble than was actually forthcoming.

While divisive rhetoric and sabre-rattling from the White House was fully expected, it is hard to see how a Trump challenge to the election result could work. The President can and will ask for recounts in the close-call states, but recounts rarely end in a result being overturned, and there seems to be no legal basis for his more outlandish challenges (even with a conservative skewed US Supreme Court, there is no precedent for stopping an ongoing vote count). The erratic nature of Trump’s claims can be seen in his supporters, who are simultaneously protesting to “stop the count” in Pennsylvania (where Trump’s lead is narrowing) and “count every vote” in Arizona (where Trump was slowly closing in on Biden). It is also worth noting that the race is only still competitive because of the somewhat arcane rules of the Electoral College. Joe Biden has gained almost four million more votes than his rival, and that number is only going to widen once the final numbers across all states (including California) have been tallied.

So, without getting ahead of ourselves, a Biden presidency looks the most likely outcome – even if protestations continue. For investors, the big positive expected from such a situation was the prospect of a comprehensive $2 trillion fiscal stimulus package – boosting the growth recovery story for the near-term for 2021 while also addressing some structural infrastructure deficits which would introduce a longer-term stimulative effect . However, results elsewhere have tempered some of those hopes. With closer-than-expected results, the Democrats’ expectations of controlling the Senate as well as the House of Representatives (which they are set to keep) have faded.

But things are not yet over in the Senate. In Georgia, no winners have been called in either of the two Senate seats. The state requires a candidate to receive 50% to avoid a runoff vote in January. In one of the races, a runoff has already been confirmed, and in the other, Republican Senator David Perdue holds only a slim lead with ballots from Democrat-leaning Atlanta left to count. Swaying both these seats would be a tall order for the Democrats, but one factor to consider is whether a defeated President Trump would campaign in a Georgia runoff from which he has nothing to gain.

If Georgia does remain red, Republican senators would have to give their approval to any bill the Democrats try to pass. Given they have already been intent on stopping any package over $1 trillion from reaching the American public, markets are expecting significantly less government spending. The value of the dollar fell in light of this news, pointing to weaker growth expectations for next year. Similar dynamics are happening in bond markets: “Coming into this election you had a market that was itching to rotate out of tech and low-yielding government bonds,” according to Schroders’ chief investment officer Johanna Kyrklund, “But now it’s looking like more of the same.”

To us, however, a fiscal boost may be smaller but is not dead. Even with a Republican Senate, we expect that compromise would be much easier to find than in the Trump years. Many Senate Republicans are Trumpian out of expediency rather than conviction, and Senate Majority Leader Mitch McConnell has a longstanding friendly relationship with Biden – calling the former Vice President “a real friend” and “a trusted partner” in the final weeks of the Obama administration. He has already called for Congress to approve a coronavirus relief package before the end of the year, even admitting that his own party will have to make some concessions.

With elections over and tensions settled, fiscal aide during the pandemic is likely to gain some bipartisan support. And, even if both sides cannot agree, President Trump has shown the sweeping powers of the executive order of the last four years. All things considered, a fiscal package in the region of $1.5-2 trillion by the end of the first quarter of 2021 still looks likely – and we suspect negotiations will be ongoing until then.

From the perspective of sustained economic growth impulses, there is certainly much to be desired about a Biden presidency with a Republican Senate. But Biden can use executive action to promote a continued growth rebound next year, while the Republicans will likely add a more corporate-friendly (i.e. no tax rises) edge to Democrat legislation. This ‘change, but only gradual’ prospect is a helpful environment for equities and the astonishingly positive stock market reaction over the week was described by many as pricing in the coming of a ‘Goldilocks’ environment ofenhanced fiscal support without a tax bill further down the road.

These expectations could be undermined by bitter partisan dogfights, but we should expect a presumptive President Biden to be much less antagonistic than his predecessor and a temporarily weaker US$ would mean that a fair share of the US recovery momentum would also carry on into the global economy through a restarting trade cycle. The slogan ‘Make America Great Again’ may have been roundly rejected at the ballot box, but for most Americans, a president-elect Biden might be the first step in restoring some credibility to the Oval Office, both at home and in the eyes of the rest of the world.