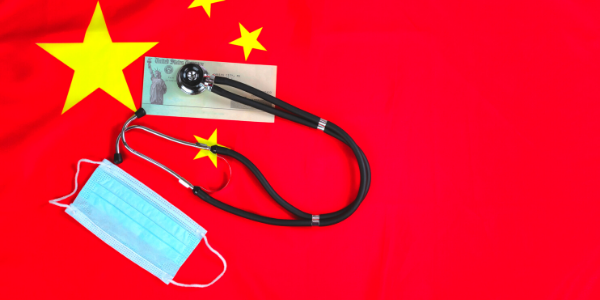 Economic growth, particularly over the long-term, is notoriously hard to predict. So, it makes the job a little easier when someone tells us outright what is going to happen. The Chinese Communist party fortunately revels in such tasks. Last week, the party released the People’s Republic’s 14th Five Year Plan, setting out growth and development targets until the middle of the decade. With China now the world’s largest economy in terms of purchasing power parity, these economic plans are hotly anticipated affairs. Past five year plans have included explicit pledges to reach designated GDP growth numbers – such as the “above 6.5%” level set from 2016-2020.

For the most part, those targets have been dutifully met (assuming one believes the official Chinese growth statistics) but like all else, the unprecedented 2020 spoilt that party at the last minute. After the COVID outbreak and harsh lockdown measures across China, the government abandoned its longstanding annual growth target for the first time in 30 years. Considering the historic falls in economic activity elsewhere, the +2.3% growth figure China recorded last year is nothing to be sniffed at – though well below the stellar numbers we are used to seeing.

The government wants to see growth of “above 6%” this year, but unlike previous five year plans, officials declined to set an average target the 2021-25 period. Growth will instead be kept “within an appropriate range” and new targets set each year depending on economic conditions. A tailing off of China’s intense growth should not be surprising, but this move is nonetheless significant for what it says about the government’s priorities.

It is hard to overstate the importance of China to the global economy. Over the last 20 years, growth spurts in China have increasingly been the motor of worldwide activity – much like the US used to provide. Many of these have come from government directed stimulus, in the form of injections of credit to stimulate domestic demand. In 2009, while the world was in the throes of the great recession that followed the Global Financial Crisis (GFC), China dramatically increased its lending activity, stimulating domestic activity and providing a vital source of demand globally. This happened again in periods of global decline in 2012, 2015-16 and last year – the deepest global recession on record. Even as China had shown itself less willing to overstimulate its economy post the 2009 experience, it managed to more than double its share of global GDP since.

The chart below shows China’s bouts of ‘credit impulse’ over the last decade. These are times when the government has tried to pump up activity through financing. As the chart also shows, each of these peaks has been followed by a significant drop in credit activity, after the government has applied the brakes to the nation’s runaway credit growth. 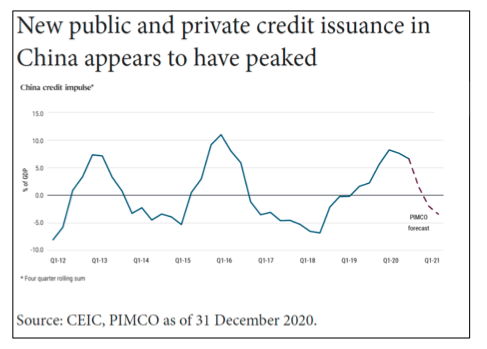 These troughs have also had a big impact on the global economy, and are very much deliberate domestic policy. Over the last few years, the government has been engaged in a well-publicised deleveraging process, where financial conditions have been tightened and harsh restrictions placed on the notorious shadow banking sector. This is well justified: Authorities are worried about a credit bubble in China and the damaging effect it could have if it bursts, in large part because of the pumping up they pursued in the past. But the end result has been a slowing Chinese economy, and less demand filtering through to the rest of the world. This was most acutely felt in 2018-19, when tightening financial conditions led to distinct weakness in the domestic economy. The Chinese liquidity withdrawal strengthened the effect of tighter Fed policy, and a pronounced sell off in US stock markets followed.

The pandemic forced the government to prime the pump yet again, unleashing significant fiscal stimulus and encouraging lending once more. But unlike other major economies, this time authorities in China did so through gritted teeth. Even last year we saw this: Monetary stimulus around the world increased to historic levels, but in China the response was much more muted. And as we have seen both in the credit impulse data and recent announcements from the People’s Bank of China, the government are already keen to tighten conditions.

Chinese authorities have begun to reduce their stimulus measures, something the world’s other central banks and governments would not entertain. This is somewhat understandable; the country got quicker a handle on managing the virus, so extensive fiscal bridging was less necessary. But the reduction of stimulus is a clear statement of the government’s priorities. Despite being in the deepest global recession on record, the party is focused on controlling future risks rather than stimulating the economy. Again, this is understandable. On the back of China’s exceptional 2020 positive growth and being on course for another strong year overall, the high societal debt-to-GDP ratio and its rapidly developing capital markets have made financial stability a key concern.

The ‘controlling risks’ approach is also apparent in other areas: Chinese authorities rather inelegantly cut short the Ant IPO last year to make sure the company had a financial holdings framework for its banking and insurance business. Tech giant Tencent has now come under similar regulatory scrutiny over its fintech activities, which is perhaps also confirmation that Chinese authorities have much less qualm to take on the tech mega caps than the West.

Containing risks now is likely to be a long-term benefit, both for the Chinese economy and international investors. Ultimately, the country’s financial infrastructure is too weak to support an economy of its size in the long run, and improving it will clearly bring benefits. But for now, this tightening means that we should not expect extraordinary economic strength domestically, or for Chinese demand to reinvigorate the global economy as it has in the recent past. Latest fiscal stimulus announcements have generated some media coverage in the West, but when we see these in the context of tightening financial conditions, the government support is somewhat underwhelming. While China has been a driver of global growth over the last decade, now it is happy to be a passenger.

We should point out a couple of things here. First, China’s underwhelming stimulus is certainly an overall negative for global growth – and one that is not fully appreciated by Western commentators – but that does not mean we should be pessimistic about the world economy. Fortunately, where Chinese authorities have to urge caution, the US government can practice largesse. A sizable fiscal package and rapid vaccination program in the US mean we are almost certain to see strength in the world’s largest economy – which should filter out to the rest of the world, just as it used to, when the US economy was the world’s economic motor.

Second, government stimulus is far from the only thing China has going for it. There is still a significant potential for growth – with estimates of 8-9% this year – and international investors are becoming increasingly keen to buy Chinese assets. Fortunately, the latter is the kind of financial growth the government is more than happy to encourage. Focusing on stability will actually help here, meaning there are still plenty of reasons to be positive.

We suspect a ‘soft landing’ is on the cards, but we should nevertheless be prepared for relative disappointment with China, when for once it will not outgrow the rest of the world – at least in 2021. Stability is a key facet of the party’s five year plan, but it may only see the benefits after that.