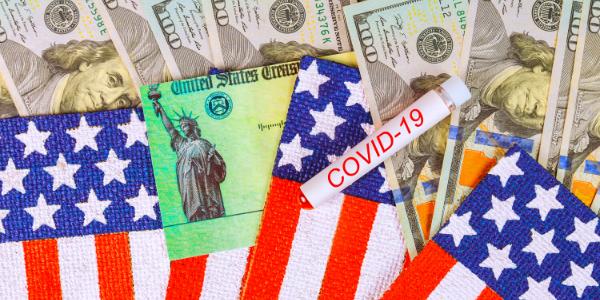 Despite the harsh economic realities of the pandemic, capital markets have had a staggering amount of confidence over the last year, all things considered. Vaccine hopes have undoubtedly played a big part in this – as can be seen in the fact that investors have rewarded those nations with advanced vaccination programs and punishing those falling behind. But perhaps even more important for the medium-term outlook is fiscal stimulus. Governments around the world have spent more since the beginning of 2020 than most would have thought possible. Much of this has been aimed at emergency support – bridging the funding gap between now and normal – but, more recently, fiscal outlays are being aimed at investing in the post-pandemic world.

Fiscal stimulus always excites investors, and nowhere has been more exciting on the fiscal front this year than the US. The Biden administration is currently pushing through a touted $1.9tn recovery plan, bringing hope that it will kickstart the American recovery in earnest. Given the size and importance of the US economy, markets are also hopeful that US activity will have a significant effect globally, generating demand to power the world economy forward this year and beyond.

Over the first few months of Biden’s presidency, those expectations were tempered somewhat. The usual political logjam in Washington means that any bill of this size and importance is going to come with compromises – with fiscally hawkish Republicans threatening to block or diminish the top-line spending figures. But hopes around Biden’s fiscal plans and the “Green New Deal” spending got an extra boost in January after Biden’s Democratic party gained (slim) control of the Senate, allowing them to push through the budget without breaking partisan ranks. This meant they could push through the COVID relief bill this week with the reconciliation approach, where effectively the Democrats did not need the Republicans’ votes.

But of course, as time goes by, more spending projects will come up, especially the significant infrastructure bill which President Biden outlined during his election campaign. It is unclear whether the incumbent government will be able to – or indeed would want to – use the rather narrow reconciliation process again. Hence, it is worth keeping an eye on the political relationship Democrats and Republicans are in the process of establishing.

Recent political news has been even more encouraging on this front. Reports suggest that Republican lawmakers are considering re-introducing “earmarks” in budget negotiations – a tactic where legislators give their support to a bill on the condition that their local pet projects are greenlit. This suggests that Republicans are ultimately willing to negotiate around spending – a far cry from the Obama era when blocking tactics impeded almost all legislation. This sign of compromise is significant: Even with the Democrats controlling both houses of congress, Republican lawmakers have the ability to slow or diminish any legislation that comes their way. The fact they are willing to negotiate with the Biden administration therefore increases the chances that the budget will get through.

Coming back to the Covid bill that just passed, there are a few signs that it may not quite match the $1.9tn headline in the end. Biden’s American Rescue Plan Act actually ‘only’ adds $1.6tn to the government’s ability to spend this year. And the Congressional Budget Office (CBO) estimates that only $1.1tn will be spent in 2021 (thereafter, there will be a few spillovers into 2022). This is because clauses in the bill mean that actual spending may turn out lower than the huge numbers making headlines. Proposed spending comes with the same ‘automatic stabilisers’ that we see in much of Europe’s permanent social security set-up , meaning that outlays will automatically decline if the economy fares well. What’s more, much of the proposed spending comes from emergency support that distressed individuals and businesses can access if needed, rather than direct payments. Ultimately, if growth and employment accelerate faster than anticipated, net spending figures will be lower.

The media has focused on the $1,400 stimulus cheques being sent to the public, but a few things should be added here. These are, first and foremost, emergency measures designed to support the hardest hit by the pandemic. This support will certainly have a knock-on effect for the wider economy, but suggestions that this amounts to “helicopter money” should be tempered. The eligible income band is actually lower than for Trump’s CARES Act last year, and the total spend on the cheques amounts to just a fraction of overall wages. The primary purpose is to lessen the impact lower income groups are suffering on the back of Covid restrictions.

Markets have become excited and concerned in equal measure about the inflationary impacts that America’s fiscal drive could have, but ultimately, stop-gap support is unlikely to send price levels skyward. The real excitement on the fiscal front comes from the long-term changes to spending, with promises of productive public investment in vital infrastructure.

There is not much mention of long-term measures in Biden’s relief bill of this week. The plans do increase short-term government borrowing, but there is no structural widening of the budget deficit, with fiscal expenditure expected to fall dramatically next year and beyond.

None of this is to say that the rescue plan is insignificant. Support is undoubtedly vital for millions of Americans, and the knock-on effect it could have on confidence and spending habits should not be underestimated. Biden’s plans are bridging the COVID gap, but legislators have a fairly generous interpretation of what that means. That is important for inflation expectations, since stimulus is likely to be amplified once activity returns to normal levels.

Ultimately, however, the plan will not provide the supercharge for long-term growth that some might be expecting. Fortunately, the President does have a plan for that too. Biden’s plans on infrastructure and tax reform are likely to have a much longer-lasting impact than his short-term support. This seems to be the Democrats’ hope: Support those who need it and build back confidence with emergency spending, then invest in a productive post-pandemic future afterwards. The political will to make structural fiscal changes is there; it just has not quite been delivered on with this plan.

Capital markets still have much to get excited about when it comes to US fiscal policy. The rapid rollout of vaccines, combined with generous enough support, should mean that growth is ready to return in force – to the benefit of the global economy. We just still need to look out for structural changes.