December review: tidings of comfort and joy for investors 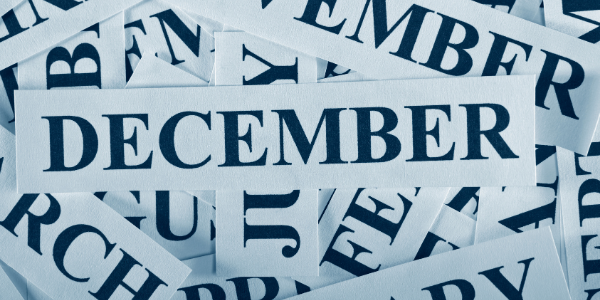 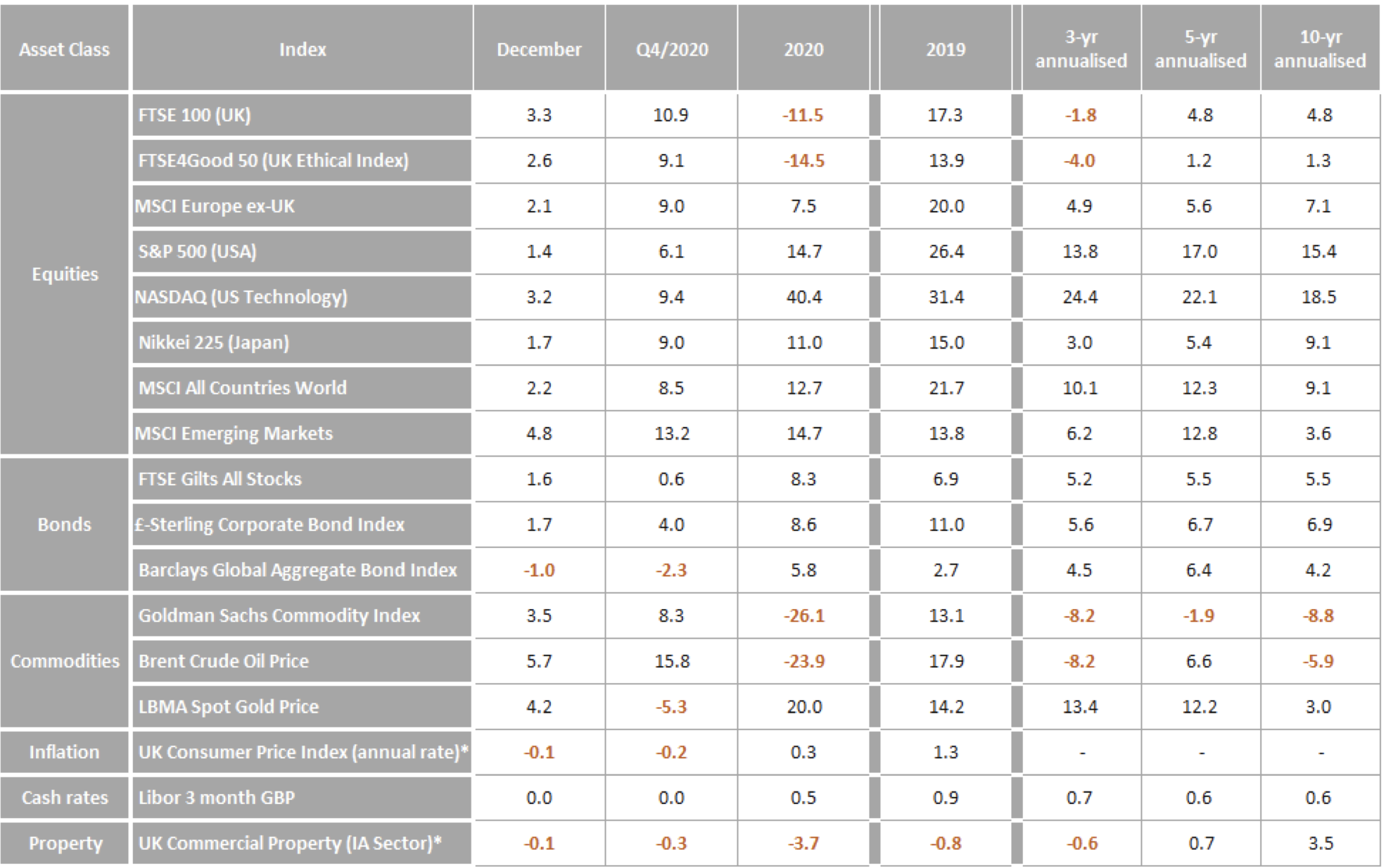 The end of 2020 may not have felt festive for most of us, but capital markets certainly had some cheer. At the global level, equities saw a 2.2% rise in December. It was a continuation of the disparity we saw throughout the year. As coronavirus numbers soared, and governments shut their nations down, the global economy sank to its deepest ever recession in 2020. Investors, meanwhile, were kept in surprisingly good spirits, as fiscal measures from governments combined with monetary countermeasures from central banks benefitted them disproportionately. December’s performance capped off a strong quarter, half and year as a whole, with global equities up 8.5%, 12.1% and 12.7% respectively. With the pandemic piling a hammer-blow on economic activity, stock performances are clearly based on expectations of a strong 2021 – as we get further down the road to normality. But this means that – once again – markets are starting the year at extremely high valuation levels.

While markets as a whole fared well last month, the spoils were not shared evenly. Emerging markets proved the biggest winners into the year end, with stocks climbing 4.8%. The second-best regional performer was the UK, edging up 3.3% over the month. That is not something we have been able to say often over the last few years. Just as with emerging markets, the UK’s strong performance was clearly due to the cyclical nature of Britain’s stock market – with many of the companies in the FTSE 100 benefit from rebounding global activity and improved economic expectations.

With activity sure to restart at some point this year, and Britain’s vaccination programme well underway, UK stocks look well placed. When we add in the last-ditch signing of Boris Johnson’s post-Brexit trade agreement, prospects look even better. While it will not come as much of a surprise for markets – as some form of light deal was the implied expectation – it will ease the uncertainty that has hampered businesses and smothered UK assets for the last five years. We devote a separate article to the deal below.

Unfortunately, a decent December and a stronger fourth quarter overall (UK equities ended Q4 up 10.9%) were still not enough to rescue Britain’s year. UK equities finished the year 11.5% lower than where they were at the beginning of 2020. This makes the FTSE one of the few global market indices to register a negative year. European stocks climbed 7.5% in 2020, while Japan saw an 11% increase and both EMs and the US S&P 500 rose 14.7%.

But these performances pale in comparison to another US index, the Nasdaq Composite, which delivered a whopping 40.4% rise last year. This reflects the dominant year had by the US mega- cap technology stocks (with technology companies comprising over a fifth of the Nasdaq), which emerged as undisputed winners of the pandemic – and darlings of stock markets – as they were viewed as the only ‘show in town’ by many investors. Whether US tech can continue its astonishing outperformance this year is doubtful, however. Tech performance has already plateaued somewhat in recent months, with expectations of a cyclical rebound pushing investors into a sectoral rotation. And, with Joe Biden’s Democratic Party now controlling both Houses of Congress, more stringent anti-trust laws brought to bear on the likes of Facebook, Amazon and Google, now appear more probable.

Looking to other asset classes, bonds had a mixed December. Once again, the UK outperformed, with UK government bonds and corporates both faring better than global bonds. Oil continued its rebound and, at $52 per barrel, the Brent Crude international benchmark finished the year at its highest point since the astonishing sell-off of February and March. Oil’s strong fourth quarter was still not enough to turn 2020 positive, and prices finished the year 26.1% below where they were at the beginning.

Gold, on the other hand, fared extremely well, posting a 20% increase over the year. In the most strange and uncertain year in modern times, it seems investors were once again drawn in by what some regard as the ultimate safe-haven asset. No wonder it has been dubbed the ‘currency of fear’. At the other end of the scale, UK commercial property struggled once more, capping a difficult year in which the physical retail industry – a huge factor in commercial property prices – had its longstanding difficulties compounded by the national shutdowns.

As written before, the positive year in capital markets would have been impossible if not for the continued extraordinary support provided by the world’s central banks. Through their extensive asset purchase programmes, central bankers flooded the financial system with liquidity. First, to stop the financial frantic ‘dash for cash’ urge of market participants in the face of economic stress back in March, thereby pushing the ‘risk-free’ rate of government bonds down to non-existent levels, rendering risk assets the only alternative for positive returns.

On the one hand, this allowed governments to spend freely in plugging the gap between now and normality, an option which – with some hesitation – most have taken. On the other, it left investors with abundant capital, the promise of a rebound on the horizon and a much lower risk of widespread defaults due to extensive government support. The question stopped being “should I invest?” and became “where should I invest?” to the great benefit of risk assets.

If central banks holding the world together was one of 2020’s main themes, the other was a noticeable shift in currency markets. Last year, we saw lasting weakness in the US dollar, paired with an enduring bout of strength from the Chinese renminbi. The dollar fell 6.7% on a trade- weighted basis last year, while the renminbi steadily climbed to its strongest level against the dollar since the first half of 2018. With the Chinese economy already growing past its pre-pandemic levels, and a global rebound coming next year, we should expect this trend to continue.

However, the otherwise very helpful and stabilising actions of central banks may have resulted in unwelcome side effects. As with previous episodes of extraordinary monetary support, the abundance of capital seems to have led to speculative rallies in certain asset classes and stocks which seem very hard to justify when applying historically proven valuation measures. In the aftermath of the 2008/2009 Global Financial Crisis, this was noticeable in the global commodity sector and, to a certain extent, property.

To be clear, at present, we are not talking about the general valuation levels of equities around the world. It is true that valuation multiples have risen to rival (in many instances exceed) levels that proved unsustainably high during the 1998-2000 dotcom boom. But, as laid out above, the extraordinarily low yields of bond investments (the only equivalently liquid alternative) makes those exuberant equity valuations ‘rational’ rather than ‘irrational’.

What may be more bubble-like is the meteoric rise of certain technology companies like Tesla, and the renewed explosion of crypto-currency values. In both cases it is hard to identify long-term intrinsic value, an implied return which would justify both the expectations of holders of these assets and the inevitable risks which come from their lack of visibility. Both require belief rather than valuation, and that makes them vehicles for speculative trading rather than investment in the classic sense.

As we wrote in December’s 2021 Outlook, this year much will hinge on the return of positive corporate earnings growth as the pandemic is brought under control versus sustained central bank support. If either one changes materially compared to current expectations, valuation adjustments have to be expected – both up and down.