IMF: Austerity is not the answer this time

The International Monetary Fund (IMF) created considerable waves this week with mixed messages in its biannual world economic outlook. IMF economists now expect a decline in economic activity of 4.4% for 2020, with the slight increase from June’s forecast owing to better than expected growth in the second quarter of the year. The higher base effect from this year is partly why expectations for next year’s growth have tempered somewhat. But downgrades to 2021’s growth outlook also reflect the expectation that virus restrictions of some kind will continue to affect our lives well past January.

That sombre note resonates through much of the IMF’s findings. Although global growth for this year may not be as bad as one may have thought, the -4.4% is still the most severe contraction since the great depression and puts the -1.7% contraction of 2009, that followed the Global Financial Crisis, firmly in its place. Emergency support from governments has worked to curtail the classic near-term impact of this deep recession in terms of dropping consumer demand from unemployment. But the IMF warns that the virus crisis will cause “lasting damage” to living standards across the world.

Much of the warning is well-known. The IMF pointed out that job losses could become permanent and bankruptcies persist for some time, and restrictions – or long-term psychological scarring – could make entire sectors of the economy unviable. Even after the virus fades, we could be in for a long and arduous recovery, with developed economies 3.5% worse off in five years compared to their expected paths pre-virus. The long-term hit for emerging economies is even worse, at 5.5% of national income. IMF chief economist Gita Gopinath foretold of dire consequences for wider society: “Not only will the incidence of extreme poverty rise for the first time in over two decades, but inequality is set to increase”.

Because lower growth inevitably leads to smaller tax revenues, a prolonged slump would result in substantially higher national government debt – a trend we have already seen in virtually all advanced economies. But the IMF advises against cutting public expenditures in response. Rather than opting for austerity to balance the budget, it recommends that governments in developed nations borrow heavily to offset weak growth.

Interest rates in advanced economies are extremely low and even negative in many countries in Europe (which means, as a reminder, that the investor pays the government for being allowed to park money in the jurisdiction), and are expected to remain that way for some time. As such, the IMF’s head of fiscal policy Victor Gaspar advised that: “Policymakers that have a choice would be well-advised to be very gradual and to maintain fiscal support until the recovery is on a sound footing and the long-run scarring impacts from Covid-19 are perceived to be under control”.

Again, the advice itself is not new. Through anchoring interest rates and injecting huge amounts of liquidity into the financial system, central banks around the world have effectively written governments blank cheques to avert short-term catastrophe and a long-term slump. Politicians have thus far been mostly happy to use this money for emergency measures in the short-term, but throughout the crisis economists have urged that long-term investment for a sustained recovery need to replace direct handouts when the immediate pandemic ends. As we have written before, questions of how this gets paid for should not get in the way of the fact that it is preferable to a balanced budgets approach, on the basis that the eventual size of the 2020 COVID crisis bill for future generations of taxpayers will depend on how quickly economies recover – and tax revenues in their wake.

What will appear new to many is where this advice is coming from. In the aftermath of the Global Financial Crisis, the IMF led the chorus of national debt fears, advising governments to substantially cut back spending. Back then, it warned that fiscal stability, rather than growth, should be the main concern. In the eyes of some, this earned the IMF some blame for the decade of austerity, sub-par growth and stagnant living conditions that followed. Indeed, its own internal auditor has since concluded it was too quick to advocate austerity in 2010-11. In the IMF’s defence, one can underline that the years of 2008 to 2012 were ‘payback time’ for past exuberances – be it subprime activity in the US household sector, or in the Eurozone, where years of low interest rates allowed for the build-up of substantial imbalances between member states. At the moment, the major cause of this recession remains the virus, even if one could find several areas in economies with room for improvement.

Another aspect catching the eye of international policy communities is that the social impact of austerity measures had a more adverse impact on broader policy dynamics (such as the rise of populist extremism in the West) than in the past and therefore deserve closer consideration this time round. Specifically, in which areas is austerity an expression of increasing efficiency of an economy (e.g. cut red tape and corruption, generate goods and service more efficiently) and hence lower the waste of resources, or where could it exacerbate social disparity and push parts of the population into poverty?

Back to the current situation, according to the IMF’s current guidance of focusing on stimulating growth through deficit spending, most developed nations should be able to stabilise their public debt by the middle of the decade, without any significant spending cuts. By borrowing heavily and investing it into the economy, overall government deficits in 2025 are predicted to be roughly where they were projected to be before the pandemic.

Politically, many will see the IMF’s guidance as a greenlight for deficit spending, even over the long-term. There are two crucial assumptions on which the fund’s expectations rest, though. First, in order to balance budgets by the middle of the decade without cutting spending, we will need to see a strong economic recovery that spurs tax revenues. That is certainly easier to achieve with fiscal investment than without it, but should still not be considered a given. The second, and more decisive, factor is borrowing costs. Due to depressed economic expectations and substantial support from central banks, government bond yields are pegged at historic lows – even over the long-term.

For the IMF’s scenario to play out, debt servicing costs will need to remain well below growth levels for the foreseeable future. In developed nations, this is plausible. The US Federal Reserve (Fed) has already committed to a ‘lower for longer’ monetary policy, stating its willingness to let inflation run well beyond its 2% target over the medium term. Most other central banks seem to be following suit and, as such, few expect any upward movement in bond yields any time soon.

For the emerging market (EM) nations, this will be much harder to achieve. They have limited access to financial markets, and domestic growth spurts are usually accompanied by a spike in borrowing costs. As such, Mr Gaspar warned that their governments will need to be much more careful about their fiscal strategies. This is one of the major reasons why under the IMF’s forecasts EMs are set for a worse post-pandemic period (compared to pre-pandemic projections). If this is true, it would likely cause greater inequality on a global level – with austerity for the worst-off and free borrowing for the best-off. We are not completely convinced by this part of the IMF’s assessment, because historically, sustainable growth in the smaller developing nations has been driven more by the global trade cycle (and lately demand from China) than domestic fiscal stimulus. To look at it from a different perspective, all things being equal, a strong fiscal boost in the developed world is better for EMs than austerity in leading advanced economies. 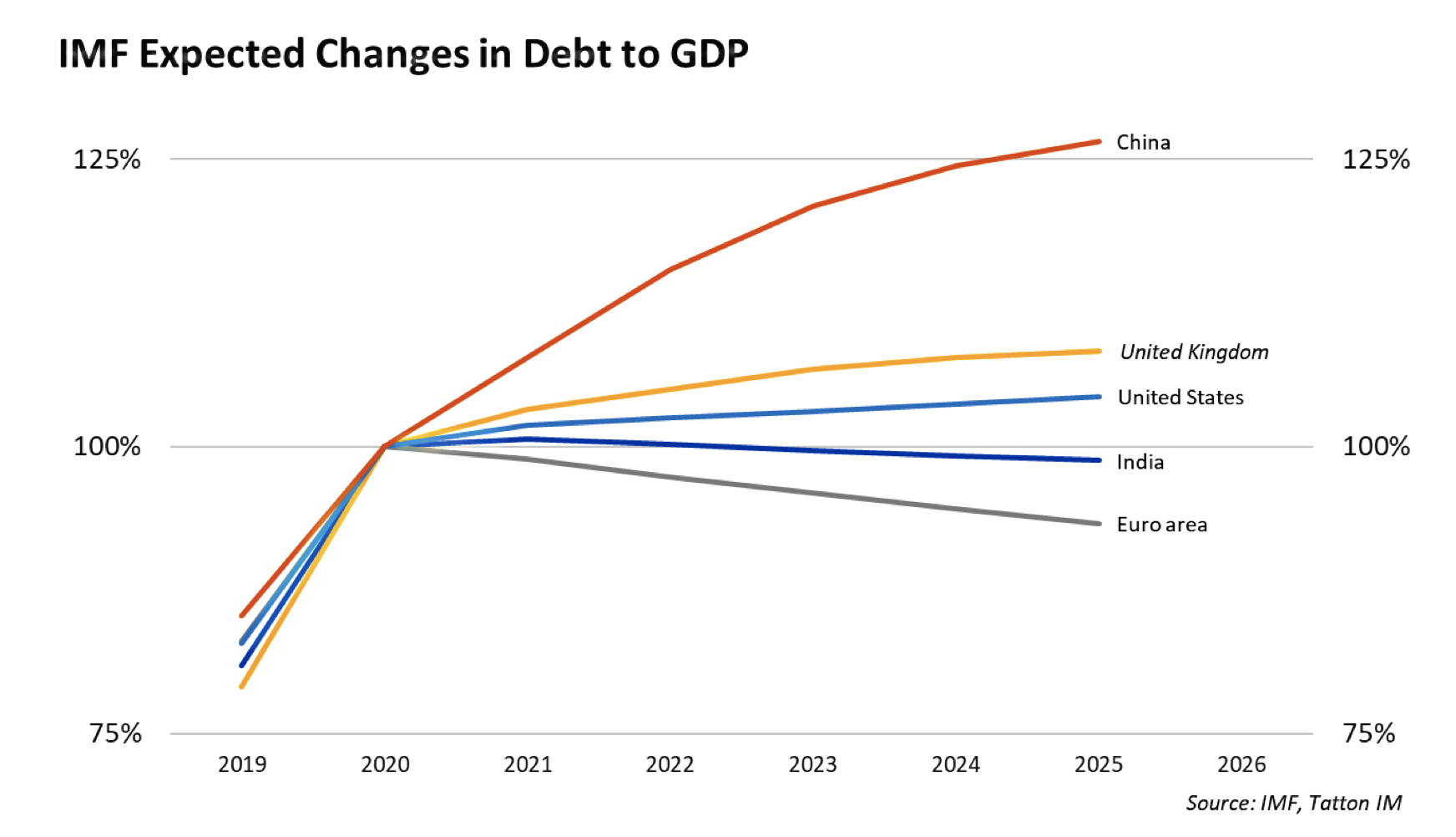 Even in developed nations, however, uncertainty persists. If, as many would hope, growth and inflation return strongly in 2021 once the virus fades, then a partial reversal in central bank policy and an uptick in bond yields would be a natural reaction. Expectations of a slow recovery would be one of the main reasons why yields are where they are, even without central bank intervention. If the recovery is indeed turning strong, we could see that changing over the long-term and central banks really being put to task to keep rates for governments’ long term borrowing low. Indeed, we believe central banks should – just as many of them have promised – hold their nerve, keep yields suppressed in the initial phase of the recovery (and, almost certainly, well beyond), and make sure that economic momentum is firmly back on track. To avoid exuberances, e.g malinvestment leading to asset bubbles, regulation would probably have to work in the background.

In any case, this highlights how crucial borrowing conditions are for the economic outlook. While the IMF’s viewpoint here is nothing new, the fact it is reiterating it now, is significant. The vanguards of international capital are telling politicians to bridge the gap between now and normal, no matter the cost. That should make them more likely to listen and overcome orthodox thinking when faced with this unprecedented challenge.