Inflation now a ‘Made in China’ product 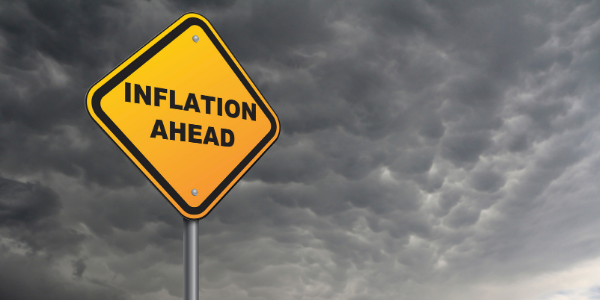 We are in a new era for central bankers. Last week, US and global monetary policymakers convened for their annual Jackson Hole conference, headlined by a speech from US Federal Reserve (Fed) Chair Jerome Powell. But Powell’s keynote address was noticeably different from previous years – and not just because neither speaker nor audience were actually in Jackson Hole. In a break from past policy, the Fed will do away with its strict target of 2% annual inflation and instead move to an average target – allowing more flexibility. US inflation will now be allowed to move above its 2% bound in the short-term, to compensate for the stubbornly low price growth we have seen for years. This means, in effect, that monetary policy will stay easy for the foreseeable future.

Judging by the capital market reaction, Powell’s announcement has already gone some way to raising inflation expectations – if only marginally. But as the FT notes, it also raised questions about why central bankers have allowed inflation to stay so low for so long. A sluggish economy and slow price movement have been the hallmarks of the post-financial crash world, but even before then inflation was subdued. The chart below shows historic US inflation in terms of personal consumption expenditure (a measure preferred by the Fed), excluding food and energy prices (the most volatile components). As you can see, inflation has undershot the 2% target almost every year since the late 1990s.

One of the key reasons for this persistent disinflationary environment is the intense increase in globalisation – and in particular the rapid rise of China. Since joining the World Trade Organisation in 2001, global production has been increasingly outsourced to China, where abundant cheap labour, and a government willing and able to pump in resources, has driven down manufacturing costs dramatically. For two decades, the ‘factory floor of the world’ has been able to produce goods faster and cheaper than any of its global peers can compete with.

Aside from catapulting China’s economy – now the largest in the world on a purchasing power basis – upwards, this has effectively put a cap on prices in developed economies. The chart below suggests that world trade inflation has become so intimately tied to Chinese exports that Chinese producers have almost been able to dictate it. China has spent the last two decades exporting disinflation to the rest of the world, also as outsourcing to China meant that workers in developed markets had little bargaining power. And, as the last ten years of monetary policy has shown, there is little central bankers can do to prevent that. 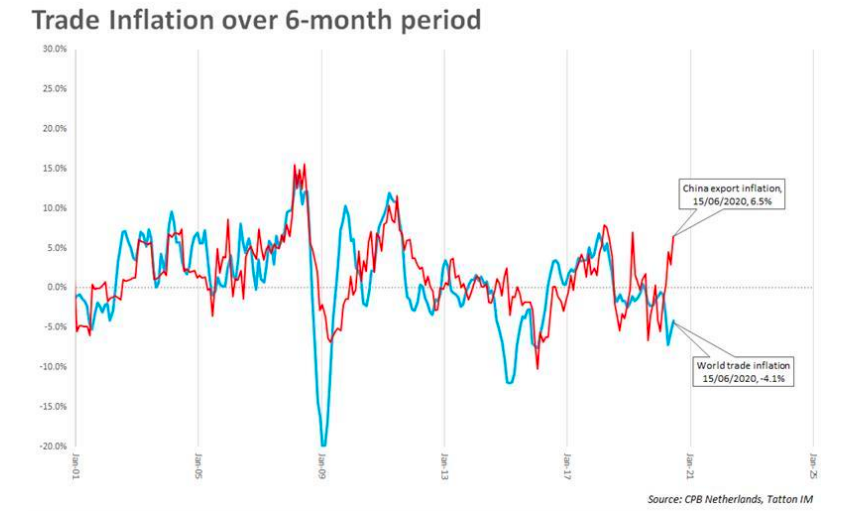 What is also shows, however, is that despite the world sinking into its deepest recession in history, and global trade plummeting, growth in China’s export prices has picked up. This is hugely significant. Like its global peers, China’s economy has been hit hard by the pandemic – shuttering shops, factories and whole cities for months. But rather than grow its way out of it through cheap exports, China is focused on its domestic economy.

Of course, this has been building for some time. Due to rapid increases in technology, wages and living standards, the ‘factory floor of the world’ moniker has been outdated for a while. Throughout Xi Jinping’s eight-year presidency, transitioning to a domestic demand-led economy – and giving citizens the ‘Chinese dream’ – has been one of the government’s top priorities.

Geopolitics has accelerated this trend. Throughout Donald Trump’s presidency, trade relations between the world’s two largest economies have deteriorated significantly, with tit-for-tat tariffs and US sanctions hurting Chinese exporters. And tensions between the two countries show no sign of letting up, with the ‘tough on China’ policy a rare point of bipartisan agreement among both US political parties. This has made China’s need for economic independence stark, forcing the government to push harder on the domestic investment and technology front.

Nevertheless, the current rise in Chinese export prices, coupled with the fact the Renminbi (CNY) has not weakened, is worth noting. While China led its currency appreciate in the wake of the global financial crisis, the 2015 episode, when the CNY devaluation triggered a global market selloff, is still in everybody’s memory. Back then, Chinese domestic financial stability was a major concern, whereas now authorities seem to have found more confidence. The domestic economy is seen as the major pillar, and one has to acknowledge that demand outside of China currently is hardly of great support, regardless of the value of its currency. Another motivation for a stronger CNY is most likely that it does not deliver an easy argument to the Trump administration to implement new measures against China.

So, China seems assured in its domestic recovery. Having gone through its lockdown earlier than most countries, and implementing draconian measures to avoid re-importation of the virus, it looks in a relatively good position– and its government is now focused on getting the economy going. Sanctions, further tariffs and the possibility of military confrontation remain big risks, but recent market action suggests that investors are relatively positive on China.

In terms of global inflation, we may be at the beginning of a sea-change too, even if it may take several years to feed through. The Fed is now trying its best to push inflation expectations higher over the long-term – with other central banks expected to follow suit. And this is happening just as one of the major secular causes of disinflation could be coming to an end. Undoubtedly, other developing countries will pick up the export slack to some extent – as we have already seeing with Vietnam’s rapid manufacturing growth in recent years. But deflation is no longer ‘Made in China’, and that is a significant turning point. With the world in the depths of recession, short-term price growth is unlikely – but the structural forces of disinflation are fading.