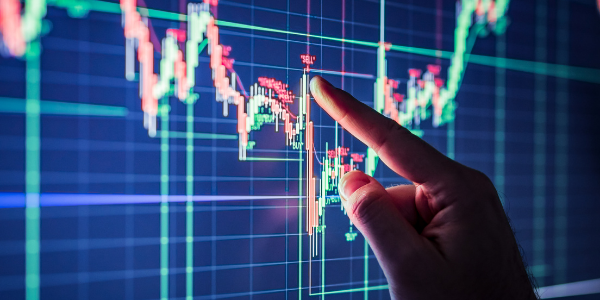 Despite the sharp sell-off we saw into the end of this week, capital markets overall have cruised through the summer. The US stock market soared past its pre-pandemic highs, powered by America’s mega-cap tech giants, while others (with the exception of Japan) saw more muted price action. With traders and the investing public away in the sun, August is usually a quiet month in terms of trading volumes. This can either lead to a spike in volatility – as buyers leave for the holiday – or it can smooth things over and calm the waters in markets. This time around, thankfully, it was the latter: Both implicit and explicit market volatility declined through the month – until this week’s sell-off, that is.

The US market broke away from its peers over the month, with continued stellar performance. But the headline record numbers for the S&P 500 index paper over some serious divergence in American companies. While Silicon Valley continues to attract investors en masse – shown by Apple’s incredible $2 trillion market cap milestone a few weeks ago – other industries and smaller businesses struggled. We can see this in the performance split between the S&P 500, tracking the performance of the largest US companies, and the smaller cap Russell 2000. The chart below shows the Russell 2000’s stuttering rally. 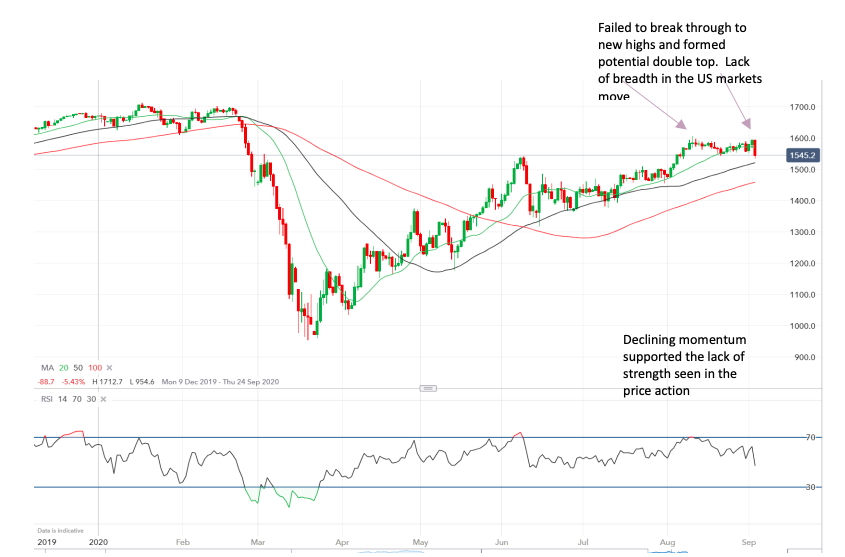 This shows the lack of breadth in the US stock market moves. Momentum carried America’s most bought companies higher through the month, but this momentum petered out for the rest. For the Russell 2000, this sluggish pace led a ‘double top’, where the short rally into the end of August was not enough to break past the highs seen earlier in the month. The S&P 500, on the other hand, broke free of its moving averages and usual trading range into new highs, as shown in the chart below. 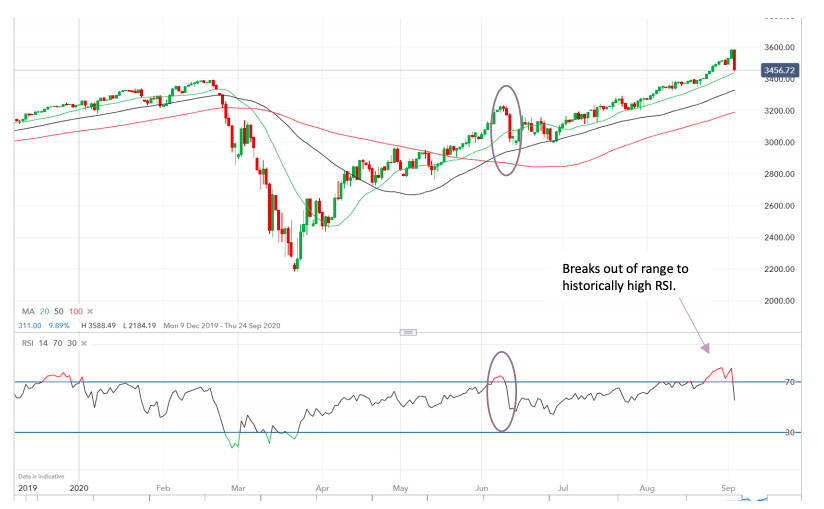 Of course, this week that rally saw a reversal. From a technical point of view, this was not so surprising. With stock markets skyrocketing as the world languishes in its deepest ever recession, many feel that equities are running on good will – and a generous dose of central bank liquidity – alone. Without economic fundamentals to lean on, investors have to take their cues from technical market measures.

One such key indicator is the Relative Strength Index (RSI), measuring the magnitude of an asset’s recent price changes to show whether it is ‘overbought’ or ‘oversold’. Towards the end of August, the S&P’s rally saw it climb to historically high RSIs (the red outer range in the chart above). The market reached the mountain top, and – one way or another – something needed to topple off. A correction was therefore to be expected.

Interestingly, a similar episode occurred back in June, when the S&P’s rally broke outside of its range only to come back down. That proved to be only a minor blip, with the US stock market powering ahead afterward. The key question is whether this week’s pullback is just another technical slip, or something more significant. And for that, we have to look into the underlying conditions for the rally in the first place.

Clearly, one of the main drivers of the recent good times in equity markets has been the abundant liquidity provided by central banks. With accommodative monetary policy anchoring the cost of capital and the return on ‘risk-free’ assets down, risk assets benefit. Throughout August, a recent trend in the major central banks’ balance sheets continued: direct purchases continue at a “cruising speed” of around 80 billion (in USD and EUR respectively) per four weeks, while little or reduced take-up of emergency programmes means the overall size of the Fed’s assets has stalled. It shows that central banks have moved from emergency market intervention, where the Fed was the most aggressive, to more traditional quantitative easing (QE) policy, which involves lower purchase volumes. 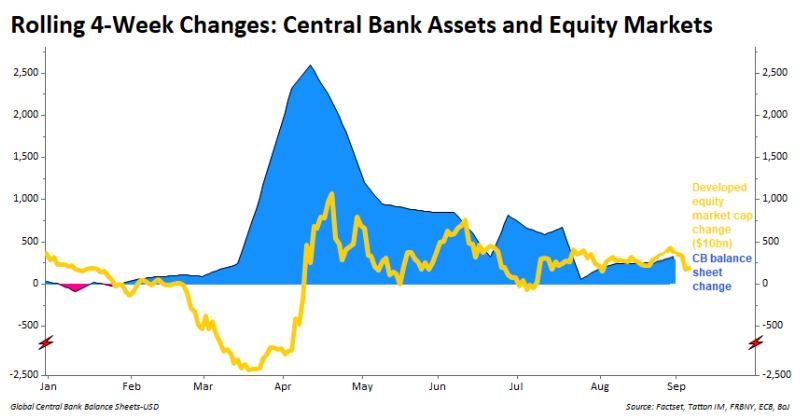 Central bank liquidity, of course, is never the whole story. August was also the month when fiscal handouts in the US began to slow. Federal unemployment support expired at the end of July and was replaced by a somewhat less generous scheme – leaving less money in the hands of the general public. Given how important retail investors have been to the impressive COVID recovery rally, a cut to incomes is also likely to affect stock markets.

Looking forward, attention will focus on how governments can continue to support the real economy. For most Americans, focus is increasingly on the furlough scheme and whether the government manages to find a suitable follow-on scheme. From an investment perspective, should the US situation become messier the closer we get to general elections, markets could well get much choppier over the coming weeks and months. If, at the same time, we see early signs of economic recovery, this may not be such a bad thing, with financial markets coming more into line with economic reality. If those signs do not come through, further fiscal or monetary action will almost certainly be needed.