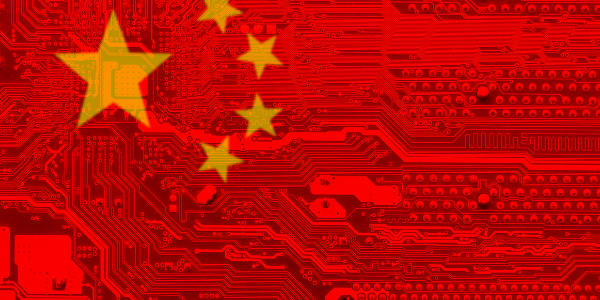 As COVID fears rattled global asset markets earlier this week, one country was notably absent from the sell-off. China’s CSI 300 Index rallied in the midweek, while stocks across the US and Europe slid the other way. China’s breakaway from the pack has been noticeable for some time – out of the major global indices only the NASDAQ has produced a higher return over 12 months. Chinese equities have been largely flat since the summer in local currency terms, but this stands in stark contrast to the volatility seen in the S&P 500, Eurostoxx 50 and – particularly – the beleaguered FTSE 100. Perhaps more importantly, the sideways motion in local currency translates into upward momentum when measured in other major global currencies. This is due to the immense recent strength of the Renminbi, which has been gaining value against the US Dollar since May. The chart below shows the year-to-date returns of Chinese equities against the rest of the world, measured in £-Sterling terms.

China’s outperformance of the developed world in 2020 is impressive enough. But particularly notable is the decoupling of Chinese equities from those of wider emerging markets (EM). It means the rally in Chinese assets is not related to general EM or global sentiment; investors appear optimistic because of China itself.

They certainly have reason to be. Having gone through the COVID motions early, the world’s most populous nation was already easing out of lockdown when the rest had just begun. This gave the economy a head start, which the Chinese government used to get both domestic consumption and production running again through extensive fiscal stimulus.

But the early start is just a small part of the story. A few months ago, we wrote that China’s lockdown-easing bonus may be fading, as the European and US economies also began whirring again into the summer months. Now the situation looks completely different, with lockdown measures re-imposed in Europe and virus cases rising again across the Atlantic. The Communist Party was criticised for its harsh lockdown measures earlier in the year, but life is now much closer to normal in China, while disruptions in the West continue. For all the unsavoury elements of China’s authoritarian regime, Western governments have envied its stability in 2020.

That stability is a key reason why China is one of the few major economies on course for positive growth figures this year. In 2019, heightening tensions with the US put pressure on China’s economy and labour market. But the pandemic has flipped the situation. While GDP figures for the third quarter show China has already surpassed last year’s economic activity levels, the US is not expected to pass that production mark until well into 2021.

Flattering comparisons like these have significant investment implications. In developed markets, deep recessions and extraordinary central bank measures have pegged government bond yields around zero. By comparison, the yield on ten-year Chinese debt has already climbed back above 3%. And the government is clearly willing to take advantage. Last week, China’s new Bond Connect program was unveiled, allowing foreign investors to more easily buy Chinese government debt (or proxies through its policy banks and state-owned enterprises) in local currency.

In the past, the government was reluctant to open its asset markets to foreign capital. But the need for greater domestic consumption (instead of private household saving) – and the relative stability of the economy – has driven the need to encourage overseas investment capital, which The Party is now more than happy to receive. The investment case for China is therefore simple to make: It has stronger growth, more stability and higher yields than competitors in the Western world – and it is increasingly open for business.

There are complications to this view, of course. The US-China trade war – and numerous human rights sanctions – has shown how significant geopolitical risks can be, and there are few signs these will abate over the medium term. But the recent strength of the ¥uan/Renminbi (CNY) suggests investors are willing to shrug them off for now.

We have written before that there are noteworthy parallels between China today and Japan in the 1980s. Back then, Japan was a rapidly industrialised nation with booming growth and an emerging middle class. This made it a popular place for global investors, causing the Yen to appreciate some 75% in the mid-1980s. As the chart below shows, the Renminbi’s path has been eerily similar. And, with the same forces in play today, we could see China’s currency appreciate from 6.7 CNY to the dollar now to around 5 CNY in the next few years. 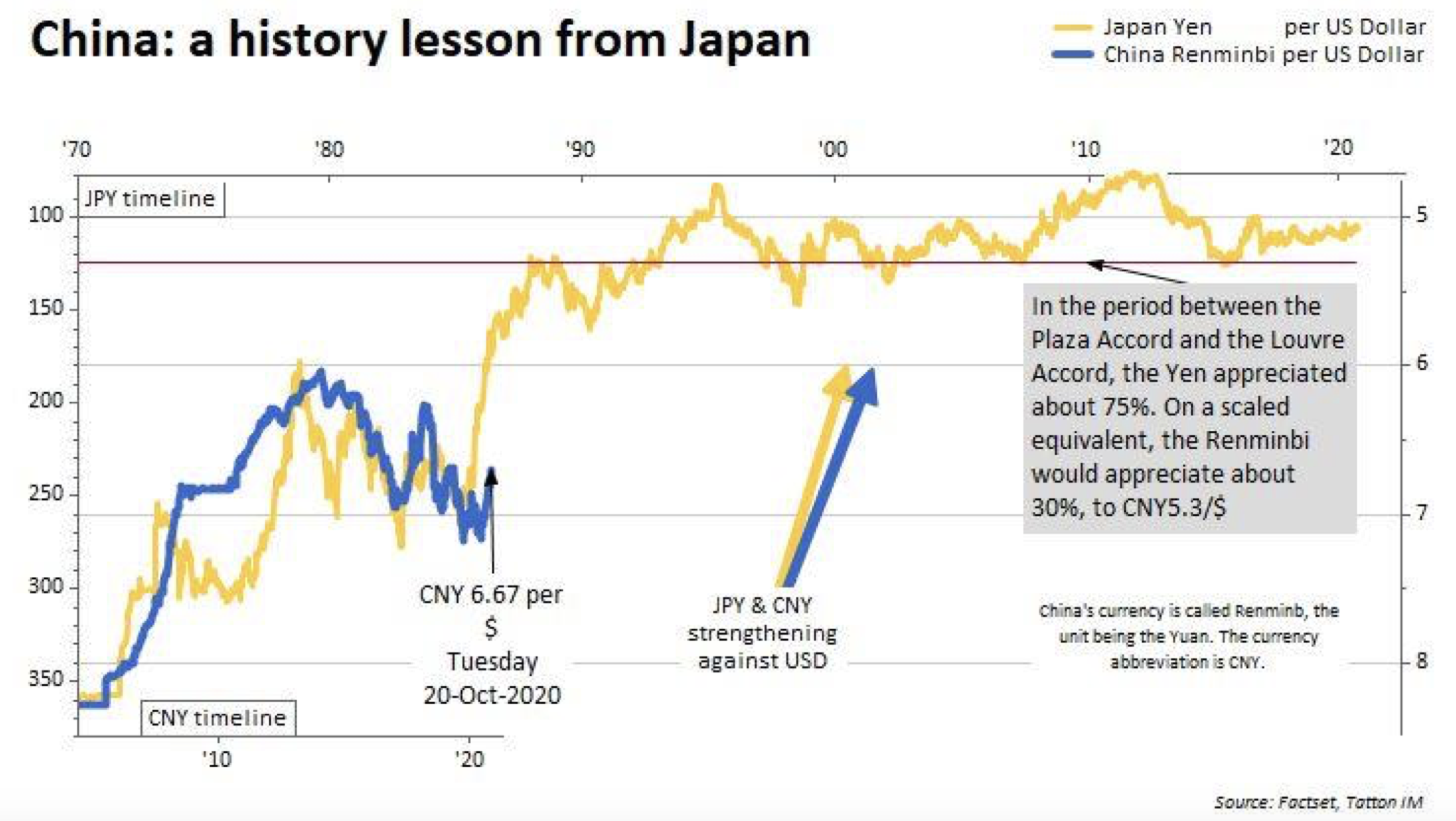 In terms of China’s economy and assets, that path clearly spells good things over the medium term. But allusions to 1980s’ Japan inevitably conjure the spectre of 1990s Japan, where the bursting of a domestic asset price bubble caused a ‘lost decade’ of deflation and low growth. It would be quite a leap to predict the same for China, but the underlying signs are certainly there: A burgeoning credit market with rising asset prices and an aging population, leading to the same inverted age pyramid by 2050 as Japan has today. Another similarity can be seen with the way China is having to deal with non-performing loans.

On their part, Chinese authorities are striving to avoid that situation. It is telling that, while all other major central banks are committed to looser for longer in monetary policy, the People’s Bank of China has tightened financial conditions in 2020 through a variety of monetary policy means, the aggregation of which is presented by Goldman Sachs Indices as shown in the chart below. The government has been aware of China’s credit boom problems for some time, and even when trying to stimulate growth it has attempted to do so in a way that does not risk inflating the credit bubble. This is in stark contrast to 1980s Japan, where the central bank pursued expansionary monetary policies to combat a decline in export growth. 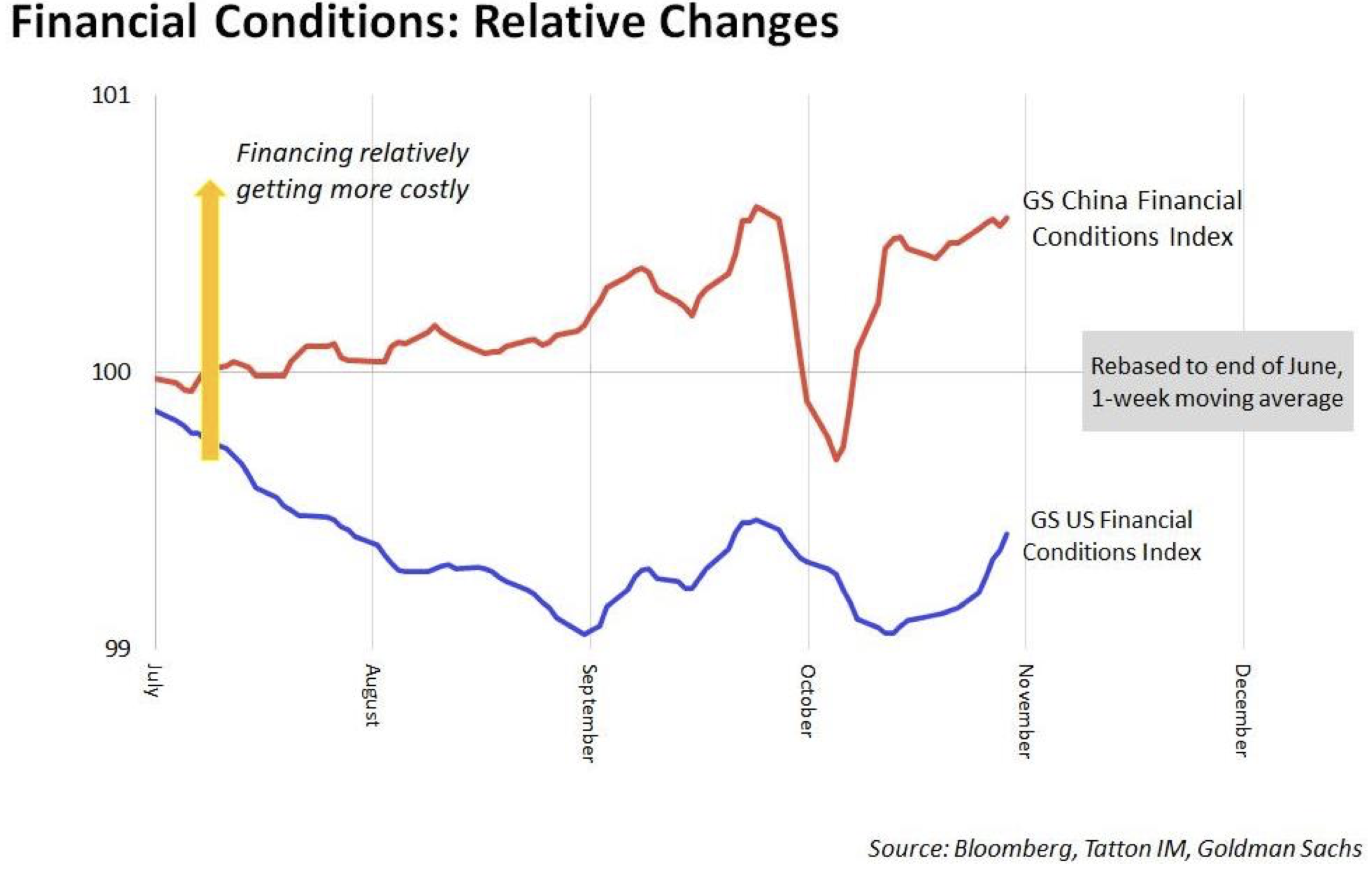 Whatever the long-term outlook, China is undoubtedly the big winner from 2020’s COVID pandemic, and shows no sign of pulling back as we head into next year. The domestic political risks that arose from frictions with the inhabitants of Hong Kong but also other large conurbations, that we discussed a couple of weeks ago, appear to have been overwhelmed by positivity and resulting public support towards the Chinese leadership over its undeniable success in dealing with COVID compared to other political systems.

Political frictions with the West remain, and have been further fuelled by widespread public suspicion and discomfort amongst global consumers that the country where the pandemic originated should end up turning out to be the main beneficiary of the world’s plight. The ability of the Chinese government to handle this conflict over the coming months and years now presents the main threat to China’s outlook. But a less combative presence in the White House could make a big difference here, if only to add some consistency in trade negotiations. For now, despite the simmering public dislike for anything Chinese, investor optimism is not letting up – perhaps another similarity to Japan’s position in the late 1980s.