Stock markets are finding they cannot have it both ways 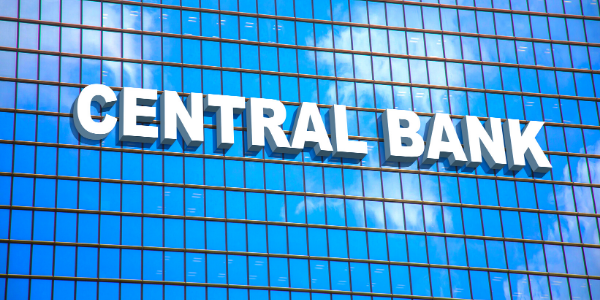 Another week of bond market price falls has pushed ten-year government bond yields upwards everywhere except Japan. The US ten-year yield experienced the biggest rise of the developed world, up almost 20 basis points (0.2%) since last Friday to a yield of 1.6%. Just as over the previous week, that fed through to US equity markets, with the S&P 500 down about 2% and the NASDAQ 100 down 4%, with a knock-on to global equity markets. UK equity and bond markets are flat in sterling terms, partly because the GBP is about 2% weaker against the USD, which is rising against most currencies.

Global financial conditions are relatively easy but, at the moment, they are not getting easier. We have reached one of those fascinating, if unfortunate, points where capital markets are, in themselves, quite a big determinant of how economic growth turns out later this year. And that is when market moves become a real focal point for central banks.

The US economy is a massive part of the global economy, but its markets are even more dominant. When US bond markets and US equity markets start falling, it has an outsize impact on the global economy. The total asset value of the market has declined, and that inevitably affects liquidity. When the US dollar also starts rising, that has an additional tightening impact.

Goldman Sachs has a set of Financial Conditions Indices designed to show how short-term rates, currencies, bonds and equity markets are likely to impact economies. Their work has shown that the indicators’ levels matter and there is a lot of comfort to be taken from the fact that the US indicator remains very close to its historically very low levels. Elsewhere, financial conditions appear to be reasonably supportive, albeit not at historic lows.

However, the changes in the index level also matter. In this respect, the recent moves on the US index send a more mixed message for growth. Europe’s indicator is still easing marginally but, for China and the UK, their respective financial conditions indices have – like in the US – been moving tighter since the start of the year. Now the dominant US indicator has started an upswing. The chart below shows that US indicator as a ratio of its level one month ago. 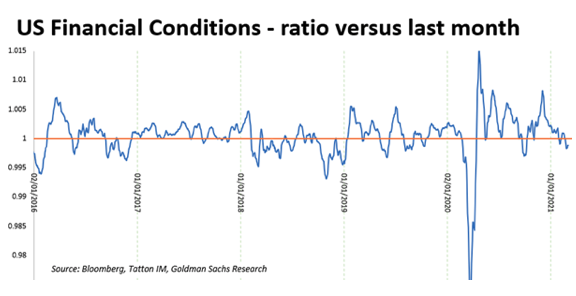 When the ratio falls below one, this indicates conditions have tightened over the month, and that markets are no longer helping the economy. Note, however, that the impact takes about six months to feed through.

Of course, this does not mean the US economy will start declining. The roughly $1.9 trillion fiscal package promoted by the Democrat Party is on track to pass into law by 14 March, the date when federal employment benefits cease under current legislation. That will almost certainly ensure the US economy will be doing well through this year and into next. Goldman Sachs’ economists have now raised their 2021 real GDP growth to 6.9% despite the tightening financial conditions. And elsewhere, as with this week’s UK Budget, fiscal measures continue to be supportive.

However, the rise in bond yields may start to be an issue if it goes much further. In the US, the Federal Reserve Open Market Committee is faced with a problem about how to reset market expectations of their behaviour, given the recent policy reset. We discuss this in a separate article below.

Last year, the US Federal Reserve (Fed) made it quite clear the best way to support the economy was by keeping yields at low levels through bond purchases. At the same time, the Fed made it clear the government should also step up to spend. The implication seemed to be, “you issue the bonds, we’ll buy them”. Now we have reached the point where the government is doing its part, but the market is much less sure the Fed will keep its side of the supposed bargain.

Fed Chair Jerome Powell, in an event hosted by the Wall Street Journal on Thursday, appeared to be rather equivocal about the bond market. He agreed that the Fed would be prepared to step in if the US Treasury market was “disorderly”, but offered nothing to suggest current market conditions were in that state. Many bond holders were therefore left wondering precisely where, when, and how the promised support might appear. Perhaps more importantly, there was a distinct sense that current conditions were nowhere near bad enough to bring it about. With not a hint of alarm from the Fed Chair, some have become worried that it might be only at yields a lot higher than current levels. Putting it another way, the stock market-supporting “Fed put” may still be there, but everybody got the strike price wrong.

Still, as noted last week, the growth outlook for equity markets is still good, if perhaps slightly more challenged by the rise in yield levels. Even though financial conditions have tightened relatively, overall policy is still supportive. The global economy will have a path defined by the (probable) end of the pandemic rather than the cost of capital. That means equity markets may suffer stiffer headwinds from bond yields, but as corporate earnings grow at the same time, they are unlikely to be destabilised beyond temporary sell-offs.

We comment on the UK Budget in the next article. The Chancellor of the Exchequer trod a careful path, but the reaction to the proposed 1% NHS pay rise tells us there will be enormous pressure on spending restraints  And, when we get to the Autumn Statement, some of those implicit spending restraints may have to loosened, or risk the wrath of an austerity-exhausted electorate.

The Government will be hoping, as are we, for a really solid bounce to the economy over the summer. Not only would this replenish tax coffers, it would also mean a way to avoid making clear those ‘hard choices’ of spending cuts in real terms that it was simply not politic to discuss in Wednesday’s Budget.