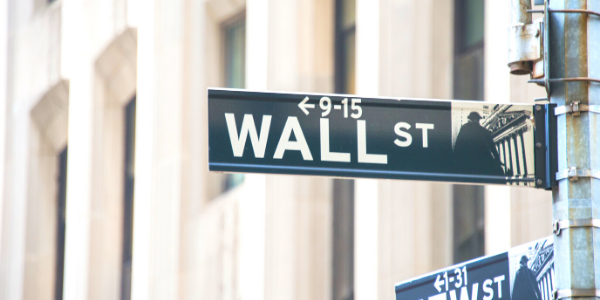 n our private lives, the first few months of 2021 were much the same as 2020 – unfortunately. Britain, and indeed the world, suffered more COVID cases, more fatalities and, once again, tighter restrictions. For investors, though, it was a different story. Despite a global economy frozen in motion and the deepest recession ever recorded, stock markets did very well last year, with some major indices climbing to new highs. That seeming disconnect has carried over to the first quarter of 2021 which has been kind to the owners of stocks worldwide.

As the table below shows, year-to-date returns have been positive for all major indices, the standouts being the US and UK, up 5.2% and 5% respectively, in sterling terms. As we move into Q2, the S&P 500 is at an all-time high, while similar heights are being pushed the world over. 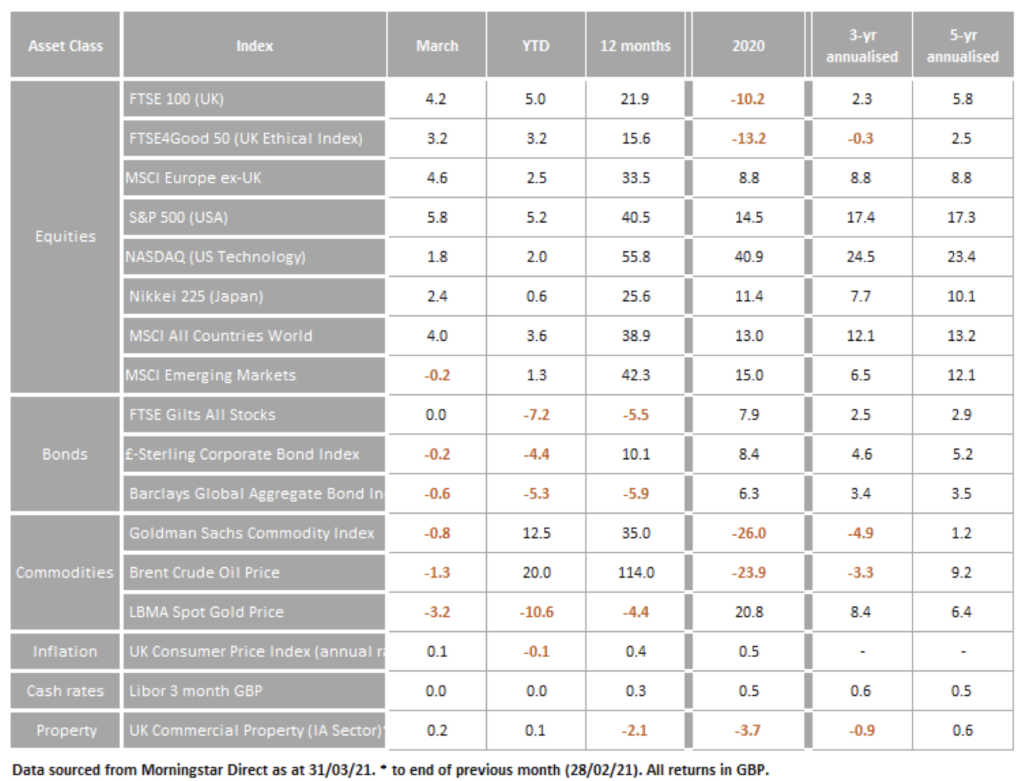 Because of timing, the base effect makes the figures for 12-month returns look mind-boggling. March 2020 marked ‘rock bottom’ for investors, but since then extremely accommodative monetary and fiscal policy has kept the public afloat, the economy somewhat mothballed (but broadly intact), and markets in good spirits, while the hopes of a strong post-pandemic recovery that breaks the pre-pandemic slow growth malaise have supercharged asset values. Risk sentiment was reflected in the strength of equities, while low risk assets – such as longer-dated government bonds – saw meaningful losses. This led to an unexpectedly fast-moving uptick in fixed income yields, as investors became increasingly expectant of strong medium-term growth. These moves are part of the cyclical rotation we discussed at the end of last year – with investors moving out of 2020’s large-cap winners and into those stocks positioned for a pick-up in global growth and less exposed to rising yields. This is reflected in the performance of the tech-heavy Nasdaq, which returned only 2% over Q1, compared to 5.2% for the wider S&P. And, we have every reason to think that the rotation will continue, with political and regulatory scrutiny adding another headwind for the US tech sector, just when cyclical factors are already tempting investors away.

The aforementioned rise in bond yields was one of the most significant market moves of the last quarter. Despite central bankers keeping monetary policy easy and bond yields down, bond markets sold off (pushing up yields, the inverse of price) after positive economic data and significant fiscal stimulus came through. With the global economy reopening while monetary and fiscal policy remains loose, markets fear the economy might overheat and inflation could soon bubble over, forcing central banks to suddenly tighten.

Bond yield fears led to a blip for wider capital markets in the middle of quarter, with not only bond values but also equities falling back, as concerns arose that tighter financial conditions might spoil the extent of the recovery ‘party’. This was especially pronounced in emerging markets, where falls were compounded by returning political tensions between the US and China, and policy tightening from the People’s Bank of China. Investors had hoped President Biden would thaw relations with its largest trading partner after a tumultuous time under Donald Trump, but there has been no sign of cooling off, and the US has now signalled its attention to become less dependent in its supply chains from the region. Emerging market equities nevertheless posted a 1.3% gain over Q1.

Elsewhere, it is clear markets were eager to pounce on any early ‘vaccine dividend’, as those countries with higher vaccination rates fared much better than those with slow uptake. The FTSE 100’s 5% gain – compared to just 2.5% in Europe – had a lot to do with this, but Britain’s global large cap businesses have also benefitted greatly from the wider cyclical rotation, as UK equities have a distinct exposure to global growth. Investors are clearly most excited about the US, however, where a rapid vaccine rollout has been complemented by two of the most significant fiscal packages in recent times: A $1.9 trillion recovery act aimed at supporting citizens through the pandemic and a $2.25 trilion infrastructure plan that promises to boost US growth beyond it.

Things are much less positive in Europe, where the vaccination programme has famously stalled while virus cases are rising, and tighter restrictions are coming into force. The political finger- pointing does not offer much hope, but there are a few bright spots on the horizon, particularly that the vaccination campaign should now finally be gathering speed as large volumes of various vaccines are becoming available. The other one is that the Purchasing Managers’ Indices (PMIs) are showing an improvement in business sentiment on the continent, despite all the bad news. We fully expect the political drama to dissipate as we move through the year – if only as the rate of vaccinations picks up. We suspect this is the low point as far as market expectations for Europe are concerned, which makes the region’s low valuation levels attractive for investors.

On the whole, markets and the global economy have moved mostly in line with our expectations at the beginning of the year. The vaccine rollout is well underway in the UK and US, and this is clearly reflected in markets’ outlook for the rest of the year. Investors are particularly excited about the US, where a combination of monetary, fiscal and health policies have set the stage for a full- speed recovery. The Biden administration’s unparalleled swiftness and competence in executing its plans came as we had suggested it might, but nevertheless has created a tangible ‘get-up-and- go’ sentiment across US society that we have not seen since the 1980s era of Ronald Reagan. What’s more, growth is expected to ‘leak out’ of the world’s largest economy through increased demand. For the first time in years, the US looks set to be the motor of the world economy – to the delight of international investors.