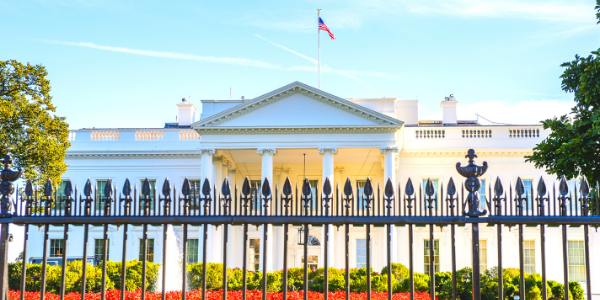 In the long run-up to last year’s US election, Joe Biden was seen as the uninspiring compromise candidate. An old establishment Washington D.C. type, with decades of top-level political experience and firm centrist credentials. Now President, he fended off challenges from the left of the Democratic Party and gave observers a sense that the status quo was back after four chaotic years of Donald Trump. But, just a few months in, those expectations look wide of the mark. Biden’s recovery act – pledging $1.9 trillion to see Americans through the pandemic – is a massive fiscal expenditure of historical dimensions. However, it can be rather easily justified with the gravity of the global crisis and hence labelled as being a ‘one-off’. However, the President’s latest plans for long-term infrastructure investment and tax reform, are something else entirely.

The White House proposes spending more than $1.7 trillion on new infrastructure, clean energy and manufacturing over ten years, calling it the biggest public investment programme since the 1960s. Most of the spending is expected to be done over eight years. An additional $500 billion is earmarked for social issues, such as labour incentives and public health care support benefits (Medicaid). The plans to rejuvenate America’s ailing infrastructure will excite capital markets on the country’s long and short-term future, but what stands out even more is how Biden plans to pay for it – by raising corporate tax rates from 21% to 28%, generating up to $2.5 trillion in extra revenues over the next 15 years. Far from an immediate injection of stimulus to get the economy roaring, the tax and spend plans amount to a significant restructuring of the US public sector, and a vision for redistributing America’s uneven wealth.

The legislation looks more like what we would expect from Elizabeth Warren (one of last year’s left-leaning contenders for the presidential nomination) than Joe Biden, but given the makeup of this administration – and the wider discussion on global tax – this shouldn’t be surprising. Treasury Secretary Janet Yellen is hardly a progressive political icon, but after years as US Federal Reserve (Fed) chair, she knows better than most how much the US economy needs proactive fiscal policy, and perhaps structural, reform. Elsewhere, Biden’s administration is littered with people promoting regulation, like Securities and Exchange Commission chair Gary Gensler, and the deputy director of the National Economic Council Bharat Ramamurti, who was an aide to Senator Elizabeth Warren.

Certainly, the White House plans will not be held back by a lack of ambition. They could well be held back by the Senate, however, where slim Democrat control could force a compromise from Yellen and co. The Republican Party is set against the size of Biden’s fiscal largesse, and especially the tax rises needed to pay for it. And while the Democrats could theoretically push their plans through the 50-50 Senate with a tiebreaker vote, that would involve getting every Democrat on board, which looks unlikely given the number of distinctly conservative-leaning Democrats in Congress.

Judging from price moves this week, markets seem unconvinced that corporate taxes will rise by anything like the Biden proposal. Equity earnings, particularly those for the dominant big tech companies, would be materially affected if those companies were forced to pay out more of their profits – and yet the US stock market this week hit new all-time highs.

Given the delicate political balance in Washington, we are inclined to agree with markets that there will be some compromise on the legislative front. But markets’ nonchalance ignores two important factors. First, without significant tax rises down the line, Biden’s mammoth spending bill will need to be funded by a structural increase in the US deficit. As we slowly return to a normal global economy, that would put additional upside pressure on bond yields, creating a major headache for both the Treasury and the Fed, who are desperate to keep financial conditions easy for now.

The dilemma is far from hopeless, but the bottom line is that the fiscal package the markets are so fond of will have to be paid for one way or another; either through higher taxes on the most profitable companies (dampening earnings expectations), higher bond yields (choking off the recovery) or structurally higher inflation (as intense monetary and fiscal stimulus bring the economy to a boil). Sooner or later, something will have to give – and markets will have to adjust to the new realities. At this point, we note that talk about Modern Monetary Theory – which suggests nearly infinite monetary financing of deficits for as long as inflation is under control – has almost disappeared. Roughly a year ago, this was a fashionable topic in financial markets.

The experienced Yellen has chosen a reasonable middle-ground of fiscal stimulus and high deficits now, taxes and redistribution later. Even if politicians take time to agree on the details, we have every reason to think this is the path they will take. We also suspect some negotiation tactics are in play, with Democrats aiming high before the political process dilutes the final version. In this sense, the corporate tax rate may well go up by less than to 28%. That brings us to markets’ second oversight: higher corporate taxation is a policy with substantial support across the political spectrum and the world. The fact that Biden – the centrist choice – is pushing forward such an ambitious plan tells us everything we need to know about how the agenda has changed over the last decade.

In the aftermath of the global financial crisis, politicians from the major economies planned to coordinate against multinational corporations taking permanent tax holidays in Switzerland, Ireland or the Cayman Islands. After much posturing, the only real outcome is that global corporate tax rates are lower today than they were in 2008. As politicians are all too aware, without coordination governments enter a dangerous race to the bottom in corporate tax – to the great benefit of large multinationals.

That is why the Biden administration has made corporate taxation at the global level its main target. Yellen wants to not only raise America’s levies; she wants to create a global minimum in the corporate tax rate, and is willing to leverage US political power to do so. Here in the UK, we have already seen politicians – Conservative ones no less – planning a hike in corporate tax, with Chancellor Rishi Sunak explicitly citing Yellen’s plans as justification. Similar conversations are ongoing in the European Union (EU), underlining that this truly is a global movement – and one investors would do well to recognise.

This could well have as big an effect on global trade and international finance as Trump’s trade wars. For America’s megatech companies – far and away the winners of the pandemic – this adds to the sense that their storm upwards in stock markets is cooling off, aided by a general cyclical rotation. But this is a long way from saying they will struggle to be profitable. Amazon, Google, Apple, Microsoft and Facebook have such huge scale and dominance that tax rises for all are not as big a concern for them as the threat of being broken up by anti-trust legislation. It may, however, mean that their future growth may no longer dominate the stock market as they have their respective markets – but after so long at the top, that may not be such a bad thing.