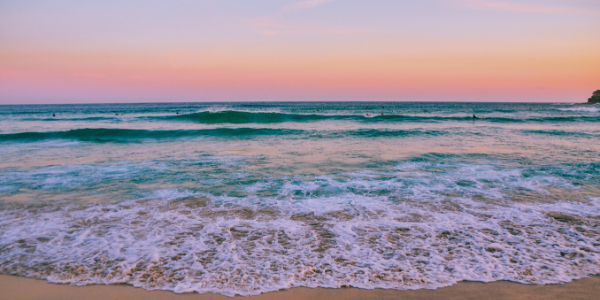 As July ends with stifling temperatures, thoughts can turn to the month ahead. August capital markets can be either quiet or decidedly choppy. As investors go on their summer holidays, daily trade volumes decline and liquidity drops out of the market – meaning even small buying or selling pressures can have outsized effects. Of course, this year we doubt many traders will be planning an August trip to Spain. But even if they do, overall market liquidity should not be an issue. Thanks to extraordinary interventions from central banks, capital markets are reasonably liquid. And for equities over the last few months, the rising tide has lifted all boats.

Those interventions have also restored investor sentiment from apocalyptic lows in March. As such, the stock market rally from early April has been about as impressive as the nosedive that came before it. But with harsh economic realities now setting in – the deepest global recession in generations – equities can only run so far on good vibes. For markets to continue upward, attention has to turn to the actual economic data.

This week, the Gross Domestic Product (GDP) data for a number of countries showed that the last quarter was the biggest drop-off in economic activity since Europe’s ‘Great Frost’ in the first quarter of 1709. The world’s two-largest regional economies, the US and the European Union (EU), were both severely affected. EU GDP showed the more dramatic effect, with lockdown causing a fall of -12.1% quarter on quarter, 3.9% worse than the US. The chart below shows the GDP rate of change for both on the same (quarter-on-quarter basis, rather than the annualised version favoured by US statisticians): 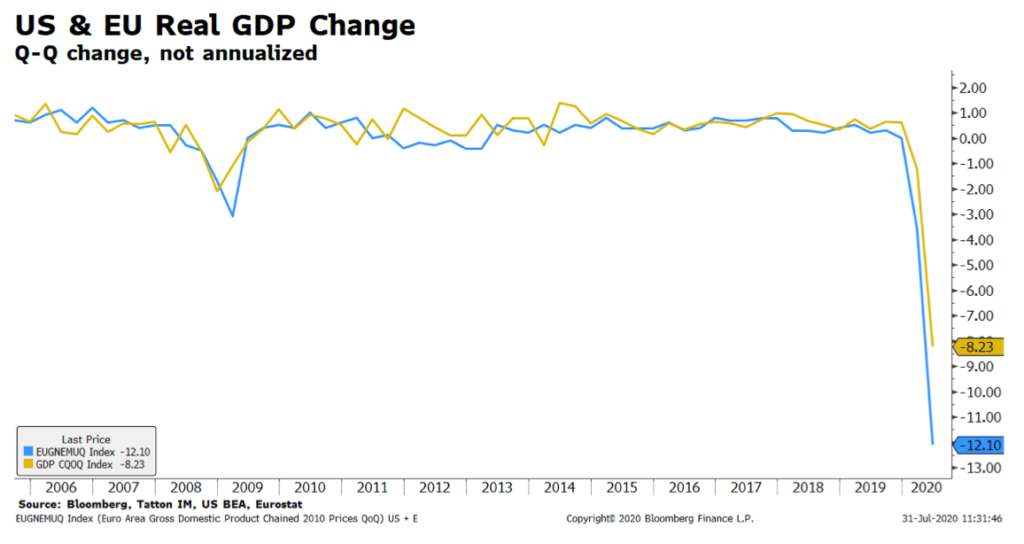 Germany disappointed in its growth figures, coming in 1% worse than expected with a drop of 10.1%. GDP data are often inaccurate on the first release – especially so in the current circumstances – so we should take this with a pinch of salt. Nevertheless, equity markets took a bit of fright. Worst hit was the UK market, which saw the FTSE 100 drop back below the 6,000 level. Markets had been skittish for a few days – with news of spiking European virus cases and quarantine impositions filtering through – but growth figures pushed sentiment over the edge.

Indeed, all through the week, economic positivity seemed to fade away, with longer-dated investment grade bond yields falling back noticeably. Dovishness from the Federal Open Market Committee (FOMC) was plain to see in their Wednesday statement, essentially promising to do “what it takes” for a long time. In a sense, bond investors now expect US rates to be at 0% for more than five years, so the US Federal Reserve (Fed) is now limited in how much more impact it can have through interest rates. As Chairman Jerome Powell noted in his press conference, the policy action that matters is now increasingly about fiscal rather than monetary largesse.

The politicians have been doing rather well in coming together to create action during the otherwise disastrous second quarter. However, in the US, the divisions have reappeared as we head into election season. It is noticeable that the divisions are not just along the traditional Democrat- Republican party line. In our article below, we cover some aspects of the Congressional Republicans’ HEALS bill, their proposed replacement to the CARES Act provisions which are now expiring. It differs substantially from President Trump’s more generous and conciliatory proposal of a temporary extension of the current $600 per week Federal payments to the unemployed. Many see these payments as more generous than necessary, so a proposal to reduce them is unsurprising. However, the transfer of burden to the states and away from the federal government could be economically disastrous. It seems to be driven by the local election dynamics, not by the needs of the economy.

A US congressional recess is supposed to start at the end of next week, the deadline which matters most. Most analysts expect that a political compromise on the bill will be achieved before then, with another $1 trillion bill of spending at least. However, yet again, the fragility caused by the partisan US political system is on show, along with the tendency to hold the economy hostage.

Regarding additional spending, President Trump has an incentive to bolster the economy in the near-term. But his longer-term spending plans will not be higher than his rival (given the Democrats’ traditionally looser fiscal policy) and that is not helping his chances. The stabilisation in virus case growth may be better news, but Trump really needs employment to be improving. It had been, but has halted in the past two weeks.

Maybe equity markets will help him. Across the world, companies have had the busiest week ever for earnings announcements, which we look at in another article below. Companies have had a torrid time, in line with the economic data. However, the larger US companies have been relative and, in some cases, absolute beneficiaries. The growth wobbles of earlier this week were pushed away by Apple and Amazon (although Google did slightly less well). Presidential challenger Joe Biden may have something to say about this if he wins. The current hearings over big tech’s monopolistic tendencies could also add to this narrative.

Trump’s tweets about the potential invalidity of the November vote seemed to have a markedly negative impact on the US dollar. A weaker dollar is usually quite a good thing for the global economy, but a rise of domestic tensions into the winter months may not be. If it were to seize up the US political system at a point when fiscal action is most needed, it could be a very unhappy outcome. The Euro has strengthened rapidly this week, with the biggest gains happening swiftly after the tweets. In general, these sorts of political stories are not that important for markets, but in this unusual time investors seem to be paying them closer attention.

Currency stability depends on the trust given to the institutions of authority. For over a hundred years, the most stable have been in the US. To be relatively weak now, when an economic crisis is still in our midst, may mean that the currency markets could be heading for greater volatility.

As a reminder, the chart below shows the last few elections and the US dollar/Euro. The Bush- Gore election produced quite a significant weakening for the US dollar after the election result was disputed. As one can see, the past two elections were quieter affairs.