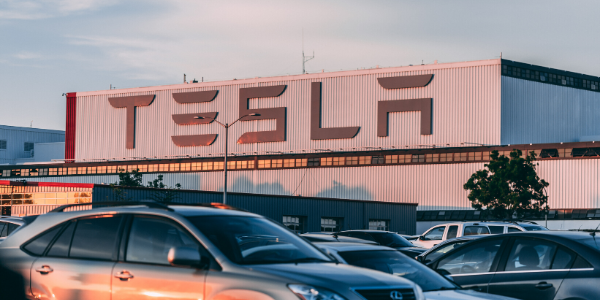 The electric car maker Tesla’s stock performance this year has been – in an analogy that will no doubt please Elon Musk – a rocket in flight. At the time of writing, Tesla shares are up nearly eight- fold since the COVID sell-off in March, making it the most valuable car company in the world. And last week, the electric carmaker reached an important milestone. On 21 December, Tesla will make its debut on the S&P 500 index, after S&P Dow Jones Indices announced it would include the group on the US equity benchmark.

The index might as well roll out the red carpet while they are at it. Upon entry, Elon Musk’s company is set to become the fifth or sixth largest in the index – with a current market cap of nearly $550 billion. With the way Tesla has been moving over the last 12 months, that figure could be way off being accurate by the time of reading.

For many, it will be confusing why one of the most valuable companies in the world has only just been allowed into a group supposed to contain America’s 500 biggest stocks. But S&P membership is not just about size alone. In order to join the club, companies must have a market cap of at least $8.2 billion, be highly liquid, have a public float of at least 10% of its shares outstanding and (here’s the kicker) it must have been profitable over the most recent quarterly and yearly periods. Tesla – a company whose value is based much more on its future than its present – had struggled to meet the profitability standard before now.

For Tesla, joining the club is so much more than a status play. As one of the world’s leading stock indices, there is around $11 trillion indexed or benchmarked to the S&P. When rebalances occur in the next few months, passive funds tracking the US stock market through the S&P500 will have to buy around $70 billion of Tesla stock.

Moreover, it is not just index-based funds that will have to start buying Tesla. Once it is in the S&P, mutual funds benchmarked against the index and who are not already holding Tesla, will have to either make a decision to underweight the company or buy it. Goldman Sachs estimates that, if the large cap mutual funds they track moved to a neutral position on Tesla, it would mean a further $8 billion of buying pressure going toward the company.

The anticipation of this buying pressure has put investors into a frenzy, with Tesla’s share price pushing up more than 40% since the announcement. According to Refinitiv, the trade volumes for Tesla’s stock have averaged about $26 billion per session since the announcement. That is more than Amazon and Apple – 2020’s other big winners – combined over the same period.

Among financial analysts, Tesla inspires adoration and scepticism in equal measure. No one doubts the company produces good quality electric cars, desired by many in a market set to expand massively in the coming decades. The question, as ever, is whether the currently still small-scale producer can live up to its lofty stock valuation anytime soon. Despite 2020 being a great year for Tesla’s output, it will still generate less than 10% of Ford’s revenue and less than 5% of Volkswagen’s (according to Bloomberg aggregates of analysts’ forecasts).

This scepticism over short-term profitability was another reason why Tesla has only just gained entry to the big leagues. Its application to join the S&P was rejected as recently as September, even after it had met the index’s 12-month profitability condition. But this time around, the S&P’s oversight committee finally decided to allow Tesla in.

The whole story is enough to make one question what indices are there for in the first place. On the face of it, the S&P 500 is just supposed to track the aggregate stock movements of America’s biggest companies. But the fact it excludes some in that group is a reflection of the index’s other function, namely that it is not just a measure of market performance, but is also an investment tool in itself.

The profitability rule in particular was a reaction to the early 2000s dotcom bubble, when media- savvy start-ups with no real profit plans reached astronomical valuations on the basis of market euphoria. Again, at first glance this is reasonable enough, but the Tesla case shows how it can lead to some bizarre situations.

The very point of passive investing is arguably to leave it up to the market to decide whether companies are good enough (following the ‘collective wisdom of the markets’). And whether one agrees with Tesla’s lofty valuation or not, clearly the market view is that Tesla has a profitable future. Why should an index committee get to say otherwise?

This point is particularly stark bearing in mind the year we have had. Swathes of S&P companies have failed to produce a profit this year, but few are in danger of losing their index status. Only allowing in profit-makers, then letting them make losses as they please, looks arbitrary at best – especially given the reinvestment drive of growth-intensive strategies that so many of the world’s largest companies pursue. It seems likely the Tesla episode will prompt some soul-searching in the S&P, with a possible further review of entry conditions. Excluding bubble-bound start-ups seems reasonable enough, but excluding the world’s most valuable carmaker, much less so.

On a deeper level, what the episode also highlights is that passive investing is not always so passive. Indices are built in a variety of ways, and often tell very different stories. European indices, like the German Dax and Italian MIB, hold arguably too few names to be deemed truly market representative, and thus are not tracked too heavily with assets. For investors focused on broader market coverage, there are also ‘uninvestable’ indices like the Dow Jones and the Nikkei – which are weighted by price rather than market cap. Which index is being tracked is therefore an important decision.

According to Martyn Hole at Capital Group: “Where a company is listed is pretty much irrelevant in today’s situation”. He argues that instead of focusing on where companies are listed, stock pickers should look to where they make their money. MSCI (one of the global index leaders), for example, includes foreign-listed companies in its home country indices. As home country and the area of cash flow generation is not always the same, some (actively managed) regional funds explicitly reserve the right to include companies in an index universe outside of the region.

This situation throws up another challenge for passive investors. If you hold a fund tracking the S&P 500, you will be a forced buyer of all the stocks the committee decides to list come 21 December. Active stock pickers are aware of this, and can therefore win big by gobbling up companies such as Tesla in advance. This is the reverse of the problem previously discussed regarding the scandal-ridden Wirecard, which was part of the Dax. Here, active managers were able to sell the stock long before it dropped out of the index, when it became apparent that opaque accounting was very likely underpinning unrealistic valuations. Active managers have manoeuvrability in these situations. This is, after all, what justifies their higher fee charges.

It is, as ever, swings and roundabouts. One need not change an entire investment strategy because of a booming Tesla stock – but it pays to be aware of the downsides too, however you choose to put your money to work.