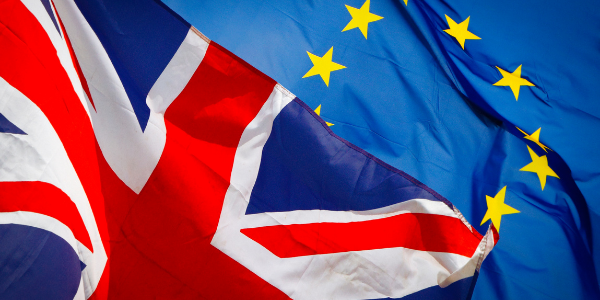 It may be the hundredth time saying this, but despite the all-dominating focus on COVID, it is now also Brexit crunch time, given the UK government rejected the offer of a further extension when the lockdown ‘sabotaged’ the already tight negotiation schedule. Britain’s official transition period of EU membership still only lasts until the end of this year, and, according to Boris Johnson, any deal needs to be agreed by next week if it is to take effect on 1 January. European Union (EU) leaders will convene for a European Council session on 15th October, and the Prime Minister has made it clear: “If we can’t agree by then, then I do not see that there will be a free trade agreement between us, and we should both accept that and move on”.

The government has repeatedly tried to beef up its negotiating position with the ‘credible threat’ of a no-deal scenario. But recent noises from Whitehall have been more conciliatory. Reports suggest there has been a breakthrough on state aid – an issue so emotive the government felt it may need to break international law over. Hot topics remain on areas like fisheries, an area of low economic impact (but a key Brexiteer talking point), and a relatively high emotional value in parts of the EU; and even here negotiators seem hopeful. Michael Gove has gone as far as to say he sees a 66% probability of a deal happening before next week.

Gove’s positivity seems to have fed through to currency markets. Sterling was able to stabilise its recovery from September lows, and the options market has been similarly positive. So currency markets are at least somewhat hopeful. Indeed, there are plenty of reasons to be.

All countries involved are still labouring under the economic pains of the global pandemic, which has frozen businesses and put individuals in desperate need of support. Ensuring stability of trade terms with our nearest and dearest trading partners, rather than opening a second ‘front’ for the wider economy, is therefore even more vital than it was before. This goes for politicians in both Westminster and Brussels. The incentive to strike an agreement has become even greater, so we expect rational heads will prevail.

That said, the incentive is not quite equal on both sides of the Channel. Over the last five years, much has been said about the “who needs whom more?” dilemma, but it cannot be denied that Britain has fared worse than its neighbours through the pandemic. Not only has the UK seen more cases, deaths and longer-lasting restrictions than most on the continent, its economy has been much harder hit. UK economic activity contracted 20% in the second quarter of 2020, significantly worse than the 12% fall in the Eurozone. Today’s release of GDP figures for August GDP revealed month-on-month growth of just 2.1%, also below expectations. The chart below shows how much lost output the UK has experienced compared to the eurozone since the beginning of the year,

However, different timelines mean the chart doesn’t tell the full story. The UK went into lockdown comparatively slower than most European nations and, as such, was slower coming out. While Europeans started venturing outside again during Q2, Britain was still in the height of lockdown. The UK economy had a marginally better Q1 than the Eurozone, declining 2.5% compared to Europe’s 3.7% fall. Nevertheless, the UK clearly fell to deeper depths than European nations in this recession, and has been slower to bounce back also.

The high-frequency data shows a similarly dour picture for Britain. Bloomberg’s activity tracker – compiling data on personal travel and expenditure – suggests Britons have been slower on the road back to normal than most others in developed nations. Germany, France, Italy and Spain all began getting people moving earlier and faster. Whitehall introducing new restrictions, both locally and nationally, it is unlikely this will change any time soon. 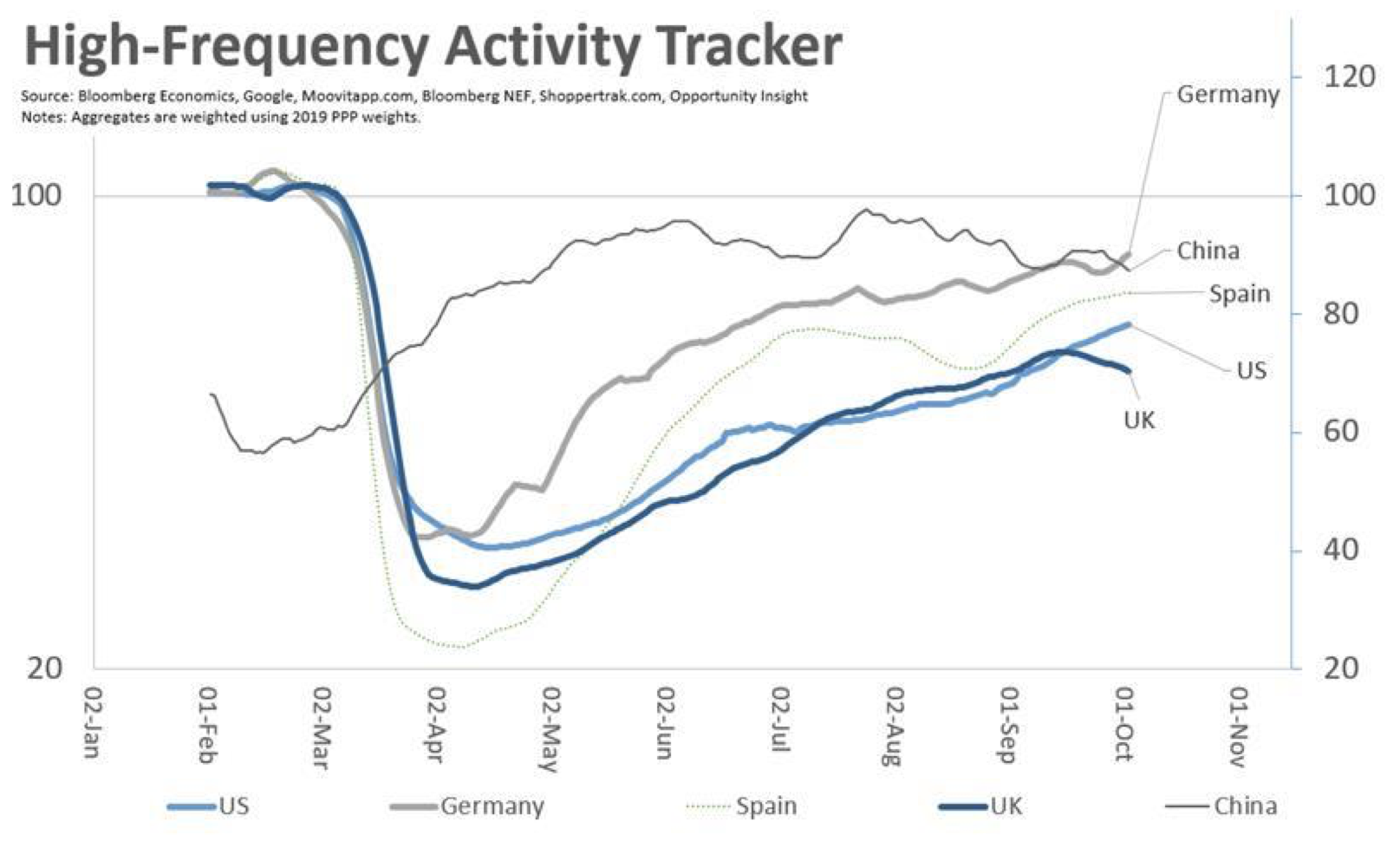 These differences have also been reflected in capital markets. While both British and European equity markets took a battering in March’s frenzied global sell-off, the recovery rally for European companies has been somewhat steeper. The FTSE 100 is currently around 20% up from its trough, while the Euro Stoxx 50 sits 36% above its March lows. Both have had a much tougher 2020 than the world-beating US stock market; and certainly the somewhat ‘old school’ cyclical composition of the FTSE 100 sector (energy, materials and financials) has played its part in what’s been adisappointing year. But there is also some evidence that investors are attaching a Brexit risk premium: the FTSE 100 has failed to rise on a weaker sterling (relative to the Eurostoxx 50), which tended to be one of its typical reaction functions.

However, there are some bright spots for the UK. Employment, the cornerstone of Britain’s consumption-led economy, is still holding up reasonably well, according to official statistics. September saw the strongest monthly increase in hiring in almost two years. In all regions except London – which is still languishing – hiring activity and intentions are looking positive. What’s more, economic surprise indices for the UK are now performing better than most major economies. In the Eurozone, the initial recovery hopes have tailed off, with the strong bounce-back losing steam.

In the UK, a slower recovery suggests there are still plenty of positive surprises for economists, as shown in the chart above.

The same is true for business sentiment surveys, which have tailed off in Europe but are holding strong here. With new restrictions coming into force, and a still greatly uncertain virus outlook, it is far too early to get excited about Britain’s recovery prospects. But if Brexit worries can be put to bed, after plaguing both business and investor sentiment for years, it would go some way to improving things. Posturing aside, the incentive to strike a deal is certainly there for both sides.