A fraying of nerves 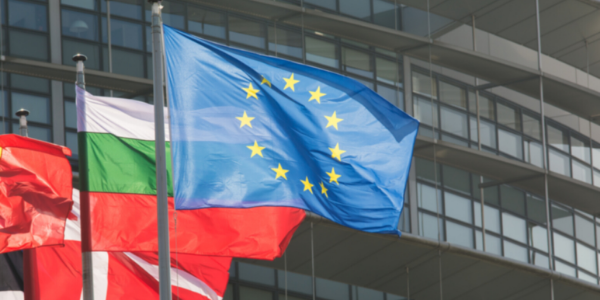 In the middle stages of the pandemic, when things had the potential for going very, very badly, there was a sense of global solidarity and unity among people and politicians. Maybe China received opprobrium – it was certainly demonised by many in the US – and the iconoclast in the White House enjoyed being different. Here in Europe, although Brexit rumbled in the background, the alien enemy created allegiance and a concerted defence effort.

But allies have returned to bickering now the enemy seems to be in retreat. Perhaps this was inevitable, perhaps it is a sign of a return to normality. The UK Government is probably enjoying being the clear leader among European vaccination campaigns, given it was its first big effort organised outside the European Union (EU). The possibility that the UK has a surfeit of vaccines may also give Johnson some bargaining chips for some of the trading issues that were not adequately addressed in last year’s rushed through trade deal. Although if that is the plan, then time is of the essence, given there are reliable sources that project that come March there will be a widespread surplus of vaccine vials as production is ramping up rapidly.

Meanwhile, the fault-lines of the EU are yet again exposed. As Jonathan Eyal says in the Singapore Strait Times, “the 27 European states decided last year that they will give powers to the EU to procure coronavirus vaccines collectively, the move hailed as a grand gesture”. But the process fell to a small, under-resourced team led by someone with no direct experience. The UK put the processes into the hands of experienced pharmaceutical professionals and generously prefunded the retooling of production facilities for unproven vaccines – all at tax-payers’ risk.

So, the European Commission’s ability as an executive body is back under scrutiny. However, let us not forget that the Euro appreciated sharply when the €750 billion mutual European Recovery Fund was being negotiated (see chart below). The bonds to be raised – and the monies to be disbursed – will be in the hands of the Commission, and the event underpinned much positivity. 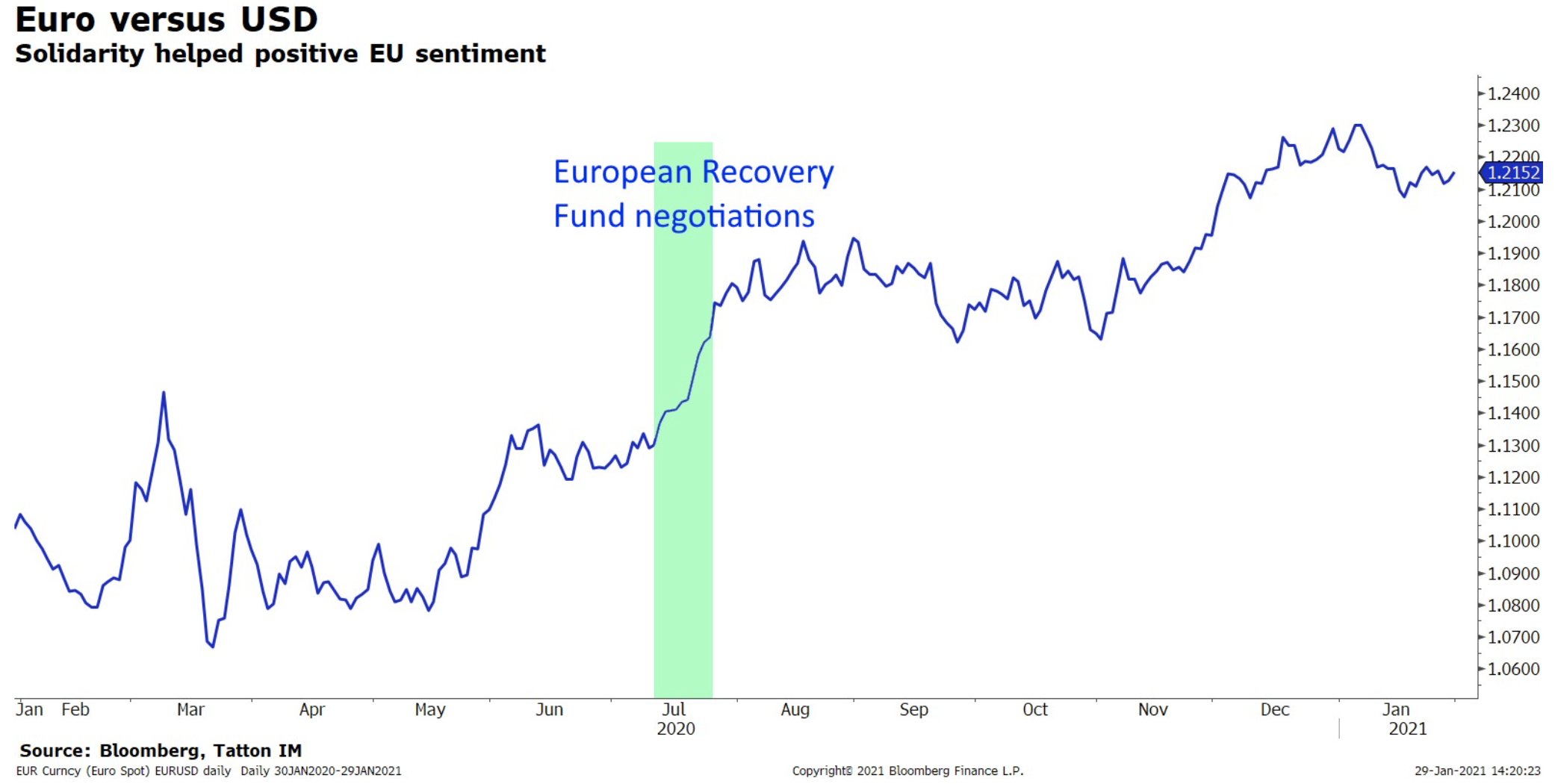 Meanwhile, the Italian government is falling apart, which generated some brief selling pressure in Italian government bond markets. As a whole, since the start of the year, the Euro has weakened a bit and European stocks have underperformed somewhat.

Still, holders of European equities and currency should probably not get disheartened. Indeed, one can make a case that exposing the fragility of the Commission is nothing new, and that this event means governments have a much stronger hand in enforcing change ahead of the European Recovery Fund’s foundation.

For the larger European companies, the most important driver of performance will be overall global growth, although the European Recovery Fund will support domestic growth, which will be important for unloved domestic banks. This week, stock markets giving back most of their early January gains may have had some causality with European squabbling and the Biden administration in the US facing a possible delay to its stimulus measures. However, in our opinion this is more of an overdue market consolidation than a sign for a meaningful setback to the recovery narrative.

Lastly, in the US, a stock market upset around names like GameStop is under way in the form of a ‘short-squeeze’ covered very widely around the world. To provide a bit more insight beyond such headlines, we have this week dedicated an explanatory article to what has been described as a retail investor revolt, but at the end of the day has more to do with groups of people sensing an opportunity to make money – while potentially being unaware of the risks they are taking. The resulting excessive levels of stock-specific volatility have potentially been more instrumental in putting a dampener on markets this week than what has been discussed above.

There was much noise coming from those involved about taking on and punishing the ‘hedge fund villains’ (while also making huge profits) that use shorting techniques to accelerate and profit from the demise of failing companies. We observe that this alleged ‘storm on capital markets’ only comes three weeks after the storm of the US Capitol by a similarly angry mob. It, therefore, has left many people wondering whether it is another expression of the deep dividedness of US society – this time between young and emancipating retail DIY investors and the generation of Baby Boomers who hold the bulk of the nation’s financial wealth through their appointed (hedge) fund managers.

Whatever the deeper reasons, this episode increases the threshold for those willing to bet on the demise of a market-listed company due to poor corporate performance. We suspect that financial regulators will swiftly address any issues of wilful market manipulation for personal gain, as this has for a very long time been a financial crime for institutional investors. If left unchecked, there is a risk that over the longer term the function of the ‘invisible hand’ of markets that drives capital towards its most effective use – of this usually scarce resource – is disrupted. Over the shorter term, it could reduce daily liquidity in smaller stocks and prevent all investors from being able to sell securities at what is deemed a fair price at a time of their choosing. This is because short selling is known to enhance the willingness of market participants to trade shares which may otherwise be deemed ‘one-way streets’, and thus unfairly deprived of access to cost-effective traded capital and forced to seek finance from banks and private equity financiers.