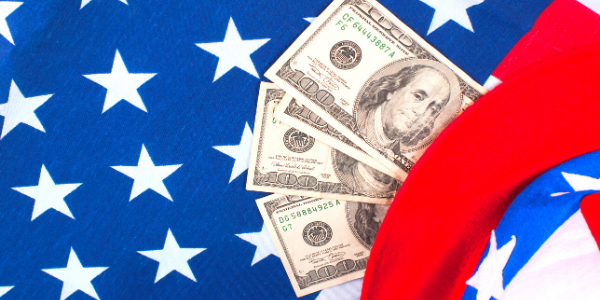 Officials within the Biden administration have stated that the new US government “will take action – not just to reverse the gravest damages of the Trump administration – but also to start moving our country forward”. Few things on the agenda promise to move the US forward more than Biden’s fiscal plans.

The White House has already lined up a $1.9 trillion COVID relief package – only a month after Congress agreed $900 billion to support the virus-ravaged economy. The plans have already faced a backlash from fiscally conservative Republicans (who only seem to care about the deficit when in opposition), but with Biden’s Democratic Party now controlling both Houses of Congress, there is only so much Republicans can do to dilute the measures. The total size of the package could be pushed as low as $1 trillion, but even at that level it would mean a fiscal boost of 8.5% of GDP.

Further spending is sure to follow, and not just on emergency relief. Infrastructure and green investment plans to “Build Back Better” were pillars of the Biden campaign and, with at least two years of Democrat control of the US legislative ahead, the fiscal drive is bound to accelerate, even if spending of a more structural nature will require increased bipartisan support.

Given the recent uptrend in stock markets, the market verdict on this seems clear. In the midst of the deepest global recession on record, productive public spending should override fears of adding to the national debt pile. Nevertheless, recent media coverage has warned of the affect this may have on inflation, in both the long and short-term. Given the current recessionary environment – and the global disinflationary pressures we have seen for more than a decade – this may be somewhat surprising. But the context of Biden’s spending measures is, of course, the extraordinarily accommodative monetary policy by the Fed that paves the way for taking on more debt at much diminished cost.

Not only is it pinning down interest rates and pumping liquidity into the financial system through its bond purchases, the Fed has also committed to a new framework for monetary policy – one that is structurally biased toward reducing unemployment while having a broader view on the definition of price stability. The consensus drawn from various Fed speeches and statements is that it will tolerate overshooting its 2% inflation target for at least a year before it considers tightening policy. And, with growth-intensive policies coming out of the US Treasury via Janet Yellen, all the policy dials are being turned towards expansion.

It is important here to distinguish between short and long-term inflationary impacts. The pandemic has crushed global demand and sent unemployment skyward – both of which put downward pressure on most prices that will not quickly reverse. Inflation in the very near-term is unlikely to come from gushing demand, but can really only come from supply side constraints, either through higher commodity prices or supply bottlenecks. While these can harm the recovery, cost-push inflation usually does not become sustained, as it is more likely to either wash out over time, or be translated into just incremental price rises across the wider economy when demand is strong enough.

More sustained inflation usually comes from a tightening labour market. If employment bounces back strongly later in the year, inflation could feed into higher wages. Policymakers firing both monetary and fiscal stimulus barrels will support these dynamics. Inflation making a return in this way is not necessarily something to be feared in the short term. Indeed, it is likely to be welcomed by markets and central banks as a spur for global growth. But regardless, just as has been the case during recent years of historically low unemployment, there are many factors that will likely stop prices from running away. Technological progress and productivity growth tend to be well- known variables preventing run-away inflation. A more general consideration is also whether the ageing global population will tilt increasingly from consumption towards savings or investment, with a higher propensity to save usually keeping down price rises. On the latter, the jury is still out, but another intriguing question is whether a result of the pandemic is that people generally prefer having some more “money under the mattress” as they have lived through months of uncertainty.

Over the longer-term though, policy will likely take a backseat to structural changes as a driver of inflation dynamics. Competitive pressures from globalisation have been a key factor in keeping inflation down for decades, but in recent years this trend has reversed. Even with Trump no longer declaring trade wars, global supply chains could still become more regionally focused – particularly given the disruption of the pandemic. And again, developments in the global labour market are likely to be key. The global labour supply has been strong for decades, thanks to the integration of China and other developing economies with their growing populations into the world order. But there is only so far this can go. We are already witnessing the growth of China’s middle-income population, no longer willing to provide the work bench for the western world’s consumers, while population growth is also slowing. Whether the resulting cost of labour price drivers can be offset by increases in productivity cannot be taken for granted.

These longer-term inflation trends are one thing, but what it means for investment in the shorter- term is another. The demand stimulation brought about by the extraordinary monetary and fiscal support throughout this crisis has made the post-pandemic reflation trade look like a good bet. Good exposure to this comes in the form of inflation-linked bonds, which have been rising in price ever since the market sell-off in March.

With central banks pinning down nominal bond yields, real (inflation-adjusted) yields have kept falling as inflation expectations rose. There are complications here as well. US inflation-linked bonds tend to be heavily influenced by oil prices – which are themselves thought of as a proxy for global economic activity. But the oil market is hugely distorted by supply controls from its biggest producers, as we witnessed spectacularly last year. With oil prices rising, the incentive for suppliers to loosen controls increases, meaning that oil prices can only go so high. Inflation expectations are likely to react to this, but at the same token can get support from a broader rise in prices – as mentioned before more likely to filter through in the form of higher wages.

Regardless, higher inflation expectations as an expression of improving expectations for a strong rebound in growth are also good for equities, particularly in the early stages of a recovery. Post- recession activity rebounds favour a rotation into smaller and mid-cap companies – which we have already seen play out in markets over the past months. Where things go from here will depend – again – on the labour market. Employment is sure to recover as the vaccine rollout takes effect, but these things take time, and even when unemployment fell to its lowest under President Trump, there was very little sign of rapidly rising wages.

The other main determinant is policy. We are only at the beginning of Biden’s fiscal flourish, but already there is talk that the recovery could turn too hot and force the Fed to tighten policy quicker than expected. If the central bank did so this year, it would almost certainly choke off any rebound. But sooner or later, strong growth will need to be met by a withdrawal of support. Only then will bond yields see a consistent rise, leading to more rotation in asset markets, not only from defensive to cyclical, but also from those spurred by low rates (Growth) to those disadvantaged by them (Value).