COVID II the sequel – as scary as the original? 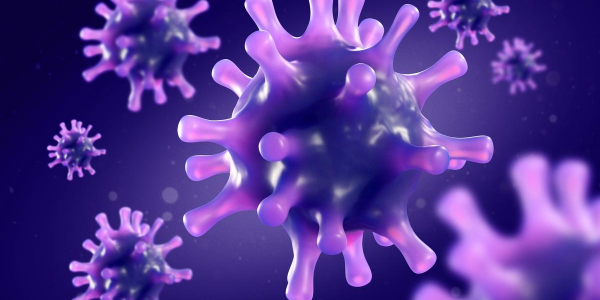 The pleasures, and then increasing discomfort, of the UK’s unusually broiling August weather offered a welcome distraction from the seemingly never ending COVID news flow of gloominess. As the heatwave came to an end with a thunderous bang, so too did many of the UK’s summer freedoms. The reintroduction of widespread lockdowns at local level, and travel restrictions for most of Europe’s holiday destinations, reiterated that the virus has not been overcome and, indeed, we may already be in the midst of a second wave, or at least a formidable resurgence.

Confirmation that the UK suffered the worst economic decline among the G7 countries during the second quarter of 2020 soured the mood further (see separate article). The recent pick-up in the rate of recovery no longer feels quite as encouraging given it hardly looks sustainable against a backdrop of returning activity restrictions.

However, there is a remarkable change in the public health picture compared to the first wave of the pandemic. As the chart below shows, the resurgence of infections across Europe has not led to a meaningful increase in the number of fatalities. It is conceivable that this trend persists on the basis that the affected are mostly the less vulnerable young, care homes are better shielded, and the medical profession now far better equipped in preventing severe cases from deteriorating towards life-threatening stages. Should this be the case, the public is likely to become increasingly reluctant to obey government restrictions as diligently as they did during April and May. Politicians would struggle to maintain the unanimous backing that is necessary to persevere with severe and economically harmful measures that are for the greater good of society. The Netherlands already appears to be heading that way and we would expect the pressure to do likewise will be strongest with those countries whose economies suffered most under the first lockdown. 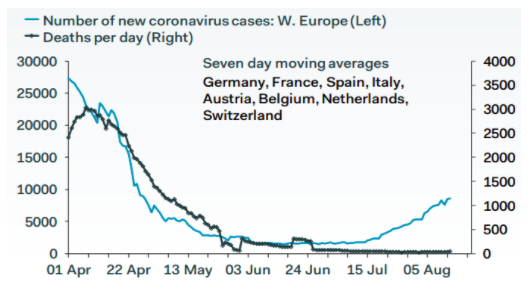 We cannot be sure whether this is indeed the way things will pan out, but we do observe that the economic damage of restrictions is now in a far worse ratio to the potential health benefits they bring than back in April/May.

Before getting too bogged down in the return of COVID news, it is worth mentioning the positives for investors. Stock markets around the world have been remarkably resilient to the turning COVID news flow and have continued to trend upwards, while only briefly interspersed with bouts of downside volatility. Of particular note from a global economic perspective is that the value of the US$ has over the past 3 months fallen between 6 to 7% against the other main currencies. Regular readers will remember that a lower external value of the ‘greenback’ is stimulating for the global economy, as export prices tend to be quoted in dollars, which increases demand when the lower exchange rate allows exporters to cut prices or earn more on the same volume of trade.

Russia’s announcement that they have become the winners in the race to licensing a COVID vaccine has to be taken with the same pinch of salt that we now apply when looking at sporting achievements by Russian state athletes. It is also slightly disappointing that they will only begin mass-production of the drug now, while most other leading vaccine developers that follow the due safety test protocols of the profession like Astra-Zeneca have already put their vaccines into mass production, valuing mass inoculation of the global population the more important objective than the PR stunt success.

It is also worth mentioning that the post-COVID fiscal stimulus restart program in the US is edging towards political compromise (highly likely with the US elections fewer than 100 days away), while there is still US$ 1.7 trillion in government funds waiting on the sidelines to be deployed into the US economy (see separate article). In total, the US programme is thereby of similar magnitude as the European Union’s restart package.

We are now half-way through the volatility-prone month of August, and adverse news continue to have the potential to upset stock markets – as today’s extensions of quarantine rules for British holidaymakers has demonstrated. Economic normality is not likely to return in full for a while but, in some sense, the resurgence of infections we are observing is a very good test-bed for our collective ability to cope with the viral threat until an effective vaccine arrives – hopefully in the next six months. Should the level of severe cases remain as low as it has been since the middle of July, then we can put August’s pessimism down to feeling excessively hot and bothered.