Europe is poised for improvement 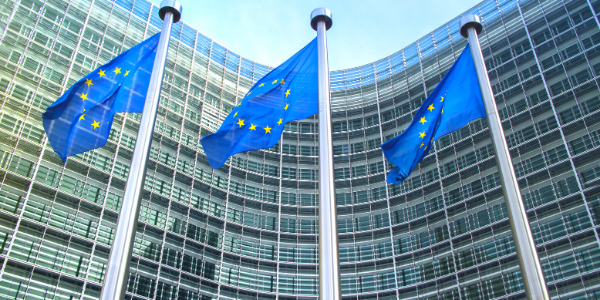 Positive stories about Europe are thin on the ground at the moment – notwithstanding that core European equity markets have broadly outperformed their global peers, including the US, so far this year. With a sluggish vaccine rollout and a renewed rapid spread of infections across the continent, restrictions look set to remain in place for the foreseeable future. This will seriously hamper certain economic activity, at a time when a sharp recovery in the US looks all but certain for the rest of this year. The comparative fortunes either side of the Atlantic are understandably making investors more nervous about European assets, especially as there is some evidence that the absent buyer has typically been foreign. Some good news, then, is long overdue.

Fortunately, the latest data shows that the slump in Europe is not quite as bad as feared. The latest purchasing managers indices (PMIs – measuring business confidence about future conditions) came in stronger than expected across the Eurozone. French manufacturing posted a 58.8 figure (above economist expectations of 56.3), while Germany’s manufacturers came in at 66.6, versus expectations of 60.5. Overall, the Eurozone posted a 62.4 figure for manufacturing against a predicted 57.6. The UK, despite being substantially further along its vaccination programme, posted 57.9, versus expectations of 55. For reference, anything above 50 indicates expanding activity, whereas 50 or below indicates a decline. Readings above 60 mostly occur during periods of above-average economic growth.

Unsurprisingly, for the services sector – arguably the biggest casualty of government-mandated social distancing – the outlook is less positive. This has resulted in a continued divergence in fortunes between producers and service providers. Nevertheless, the services sector across Europe still beat expectations, with France contracting less than predicted, and Germany posting a (slightly) expansionary 50.8. It does now seem service providers are more able to deal with lockdown measures, and some even becoming hopeful about potential easing of COVID restrictions. This is most visible in the UK, where the services PMI came in at 56.8, significantly outpacing the expected 51.0. Improved sentiment likely has something to do with the steady easing of restrictions in Britain, but it also shows businesses are holding up better than previously feared. 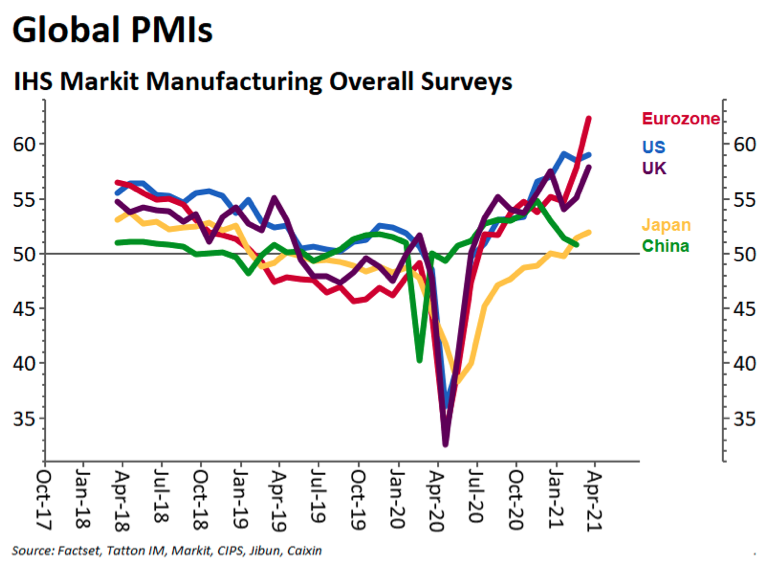 These positive surprises here and on the continent stand in contrast to the US, where the latest economic figures have fallen a little short of expectations. Some of that disappointment seems weather related (so may pass quickly), and comes against a backdrop of much worse expectations for Europe than then US (making the beat less impressive). But it does give reason to be hopeful, dispelling at least some of the European economic doom and gloom.

A brighter outlook is something investors could certainly do with. European markets have reacted negatively to rising virus cases and the slow vaccine rollout, despite continued restrictions now a key factor in holding back EU businesses. This is understandable. Even if German manufacturers can continue well enough in current conditions, a summer lockdown could be a serious setback for the hospitality-heavy economies of Greece, Spain and Italy.

However, the current pessimism could be exactly the reason to be more positive about European assets. Despite the world being mired its deepest-ever recession, equity markets remain at highs globally. Investors are not just hopeful about a strong recovery later this year, they are expectant – with a big rebound already priced in, particularly in the US. European equities are one of the few asset groups for which this recovery is not already fully discounted. European businesses have plenty of catching up to do, but that leaves their share prices with much more room to rebound than US rivals.

What’s more, Europe’s export-heavy economy means it often does well in times of strong global growth. We certainly have already seen export sectors and markets performing well, but we expect the global recovery to broaden later this year. What is needed on top of external demand is also a solid domestic base, which leads us back to the current vaccine rollout.

Export disputes and ‘vaccine nationalism’ clearly rains on this parade somewhat. But again, there are reasons to think not all is lost. Negotiations with AstraZeneca and the British government are ongoing, and we suspect a compromise will come sooner rather than later. Moreover, despite the gloomy headlines, Pfizer-BioNTech is set to deliver an additional ten million more doses to the EU by the end of June than was initially planned, while there are hopes that Johnson&Johnson’s single shot vaccine could become more readily available. Ultimately, while disputes are unhelpful, the vaccination programme is likely to markedly accelerate from here, if only because it has reached its low point. We write more on political concerns in a separate article.

We have already reached the point where post-pandemic expectations are driving market moves even more than COVID news, and that may suit European equities. Global markets are still digesting the recent rise in bond yields, and what it might mean for stocks, as well as how the world will move on once everyone has been vaccinated. The questions here are around what large-scale macroeconomic policy should look like. Indeed, this debate has been occupying investors in the US. But that debate has not yet reached Europe’s shores – when it does, things may look a little different.

One of the biggest concerns for markets currently is when and how the US Federal Reserve (Fed) will have to start tightening monetary policy. But this concern is entirely absent in the Eurozone for good reason – no-one is in any doubt that Europe still needs extreme monetary easing for the foreseeable future. This ultimately stems from weakness in Europe’s economy, but it could nonetheless turn into a positive. As the world moves away from easing, and markets get the recovery they are expecting, Europe could be the one market still powering forward just to catch up. Ultimately, that could help investors further down the line.