Geopolitics back on the radar as diplomacy runs aground 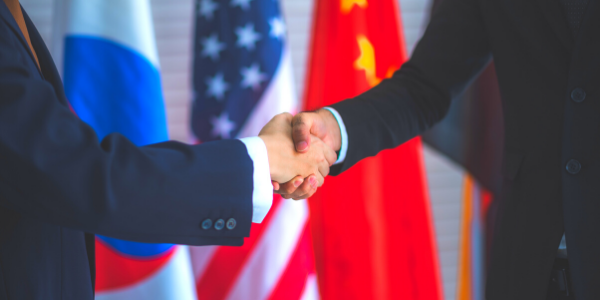 As we enter spring, the world thankfully looks a little brighter. The vaccine rollout is well underway in the UK and US, and is having palpable effects on the outlook for the second half of this year – despite disruptions on the continent and virus mutation scare stories. For investors, despite the caveats, there has also been a notable improvement in near-term economic expectations. Nowhere is this truer than the US, where easing conditions, an accommodative Fed and a blast of fiscal stimulus have set the stage for a full-speed recovery. But this strength should fortunately filter out to the global economy and, even without the US spillover factor, there is a sense that for the rest of the world the harsh winter is also behind us.

Although the economy is looking better, the pandemic’s influence is not gone yet. ‘Vaccine nationalism’ has shown up around the globe – with countries either choosing to keep first supplies to themselves (like the US) or now having second thoughts about its export drive. This has been particularly visible in the EU, which has put forward plans to restrict vaccine exports to those countries not exporting much vaccines themselves and with a higher immunisation rate than the EU. As things stand, the EU has stopped short of a firm export ban, but the tug of war around AstraZeneca’s supply has likely not yet come to an end. A similar mood is gripping India, where vaccine exports have been banned outright, and unfortunately they are the world’s largest vaccine producers.

Perhaps more importantly for the medium-term investment horizon, broader geopolitical themes are moving back into focus. This may just happen as improved pandemic (and thus economic conditions) allow politicians to refocus on pre-pandemic issues. Therefore, it may be worth keeping track of recent developments.

In an unusual move when compared to the most recent decades, the ‘Western’ nations – comprising the EU, UK, US and Canada – have imposed sanctions on senior Chinese officials over the treatment of Uighur Muslims in the north western autonomous province of Xinjang. China reacted immediately with counter-sanctions on western private individuals. While sanctions are a long-used political tool, and have been in place against Russia for several years, this is a new feature in the West’s relationship with China.

On the trade negotiation side, things did also not go smoothly last week when China and the new Biden administration engaged in an hour of sabre-rattling in front of the global media. Delegations from both nations met in Alaska to commence the new relationship, but the resulting shouting match was hardly a ‘diplomatic’ start. Add to this that Joe Biden labelled Vladimir Putin a “killer” on national television, and the new administration’s first international interactions were somewhat underwhelming. It was certainly not the anticipated conciliatory approach – the complete opposite of the abrasive approach favoured by former President Trump – that most observers had been expecting.

We took comfort though from Biden’s first press conference on Thursday, when he clarified that the US was not aiming for confrontation with China, but acknowledged a situation of “steep competition”. Biden outlined three areas on how the US is approaching the situation: a) the US must increase its efforts to promote innovation; b) it must re-establish alliances with nations outside of China, be it in Asia or Europe and c) it has a responsibility to promote US values. In other words, the US will keep pointing out areas and countries that are falling short of the ‘American’ value system. Admittedly, this leaves a wide array of possible political outcomes.

The relationship between the world’s two largest economies has been strained, with Trump’s trade war building a substantial wall of tariffs on both sides. The hope was that the trade relationship would improve in the Biden era, but as we noted at the end of last year, this hope was always a little far-fetched. Anti-China sentiment is a rare point of bipartisan support in Washington, although the Democrats are more concerned with issues over freedom. It has certainly proved that way so far, with Biden corralling allies to take a united stand against human rights abuses in the People’s Republic and threats to Taiwanese independence. North Korea’s nuclear ambitions are another pressure point in the region, where any sign of US-Chinese co-operation would help to lower tensions.

The tools at Biden’s disposal are still those used by Trump. Biden has moved forward with Trump’s threat to delist Chinese equities from the US stock market – a decision many investors expected him to reverse. These moves have already had an effect on equity markets, with Chinese stocks declining after the delisting rumours spread (as well as a domestic Chinese clampdown on its own tech companies) and the Renminbi weakening against the dollar. But by and large, capital markets have so far shrugged off these tensions. While we expected Biden to keep up policy pressure on China, we had hoped for a more diplomatic tone than his predecessor. So far it has been a patchy start. We shall watch developments in this area closely.

We always try to be careful when linking geopolitics to investment. Our experience at Tatton is that being overly focused on specific risk scenarios can lead to overestimating both their likelihood and/or their negative impacts. We maintain the belief that investments grow best under applied risk management rather than risk (and therefore return) avoidance.

Another aspect for investors to remember is that risks are all about ‘unknowns’. Individual investors can never have all the information, and there are always areas where some information is less reliable than others. Companies may try to present the best interpretation of their outlook, but strict regulation prevents them from skewing this interpretation too much. Politicians and diplomats are not subjected to the same types of audit. So, in general, we look to monitor political risks while being moderate in the application to investment strategy. At the moment, geopolitical concerns are not enough to derail economic positivity. In other words, ‘risks’ are not the same as ‘themes’. But they are certainly narratives we should continue to watch as the wider world returns to a more normal state.