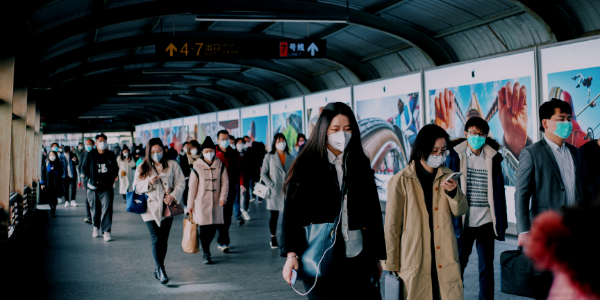 Desperate times call for desperate measures. The global economy has been ravaged by the pandemic, struggling under the cycle of lockdowns and rising virus fatalities for a year now. The forced shutdown of entire business sectors has led to the deepest global recession on record – with increasing numbers of affected businesses closing their shutters for good. Thankfully, the economic policy response to this crisis has been decisive. Central banks across the developed world have embarked on extraordinary asset purchase programmes that have kept borrowing costs suppressed, while governments are plugging the income gap with spending measures not seen before in peacetime.

Few would deny that these measures are necessary. Without governments supporting businesses and individuals through lockdown, incomes (and as a result demand) would plummet, leading to mass insolvencies. Without central banks buying the debt to fund those programmes, borrowing costs would spiral – turning the March 2020 stock market turmoil into a disastrous global financial crisis which would have made 2008’s crisis look benign by comparison. That said, historic and unprecedented policy intervention makes politicians and the public understandably nervous.

Media headlines are filled with ever-larger spending numbers. With US politicians debating a $1.9 trillion US fiscal package and more, the twin spectres of debt and deficit are getting a lot of airtime. The underlying assumption is that these immense debt loads will need to be paid for somehow – either by higher taxes, austerity or, worse, sovereign debt crises.

First, we should remind ourselves that the “how do we pay for it?” question should not get in the way that support needs to be provided by authorities that impose restrictions to save lives. That’s at least the current consensus in the developed world, and along this line of thinking, economists and policy experts agree that a world with lockdowns and deficit spending leads to better long-term economic outcomes than one with lockdowns and no deficit spending. For now, the global recession is an artificial one forced by government-imposed closures. But, without furlough schemes and emergency loans supporting incomes, the unemployment and default rates would skyrocket, depressing aggregate demand and landing us in a ‘classical’ recession – and a vicious one at that.

Second, while growing government debt piles will force some kind of adjustment at some point in the future, it is not true that exclusively tax rises or austerity can tackle debt in the long run. Public finances are a delicate equation, comprising tax receipts (and outlays), borrowing costs, and long- term growth prospects.

A growing economy means higher tax receipts at the same tax rates, just as a declining economy automatically leads to lower receipts. As long as the cost of new borrowing is below expected nominal long-term rates of GDP growth, the money governments take in should outpace the money they hand over to bondholders. Expanding this to the overall debt situation of a country, its treasury can run a primary deficit (annual budget shortfall before debt financing) without increasing the debt- to-GDP burden, for as long as interest paid on the debt is below nominal GDP growth rates (this all holds to varying degrees, depending on the depth of the primary deficit, etc). Even the International Monetary Fund – previously the world’s pre-eminent budget hawk – recommends developed nations borrow their way through this crisis, as the alternative would lead to even higher debt and lower growth over the long term.

Of course, this means low borrowing costs are the crucial factor. Here, the worry is that large national debt puts governments at the mercy of bond vigilantes, who can force bond yields higher by selling the debt of countries perceived to have unsustainable budgets. There are two things to consider here. First, bond markets only punish fiscal fecklessness when a nation’s finances are worse than others – and for now the everyone is more or less in the same boat. Second, predominant buyers of government debt across the developed world are currently central banks, not private institutions.

This is an extraordinary situation. With governments committed to debt-funded spending, and central banks committed to practically unlimited bond purchases, the end result is effectively fiscal policy by printing press. Such monetarisation of government deficits makes many uncomfortable – conjuring up images of hyperinflationary Germany in the 1920s and Zimbabwe in the 2000s – but those worries need to be put into context. With restrictions suppressing activity all over the world, runaway inflation is hardly a present concern. And, when the economic ice age starts to thaw, there will be plenty of supply keen to soak up the returning private sector demand, while monetary and fiscal expansion will undoubtedly be tapered back.

Interestingly, and contrary to perceived ‘bond-vigilante’ rationale, over the last year we noted that capital markets seemed to even be rewarding free-spending nations rather than punishing them. Those countries announcing looser monetary and fiscal policy saw their currencies appreciate, suggesting investors also accept that copious emergency support is preferable to parsimony from politicians.

This does have its limits. More recently, bond yields across the developed world have risen on the back of increased inflation expectations for the post-pandemic world. A stronger than expected economy at the end of last year, coupled with renewed fiscal zeal in the US, has led investors to expect a more rapid recovery once the world opens up – leading to higher inflation expectations in the medium and long term. This could make things difficult for governments, as higher debt costs will mean either more limited spending power or higher and potentially unsustainable debt-to-GDP ratios in the long-term (as explained above). Below is a table where we show the upper limit for yields to maintain stable debt/ GDP for the world’s major economies in three years’ time, based  on IMF growth, inflation and fiscal expectations. 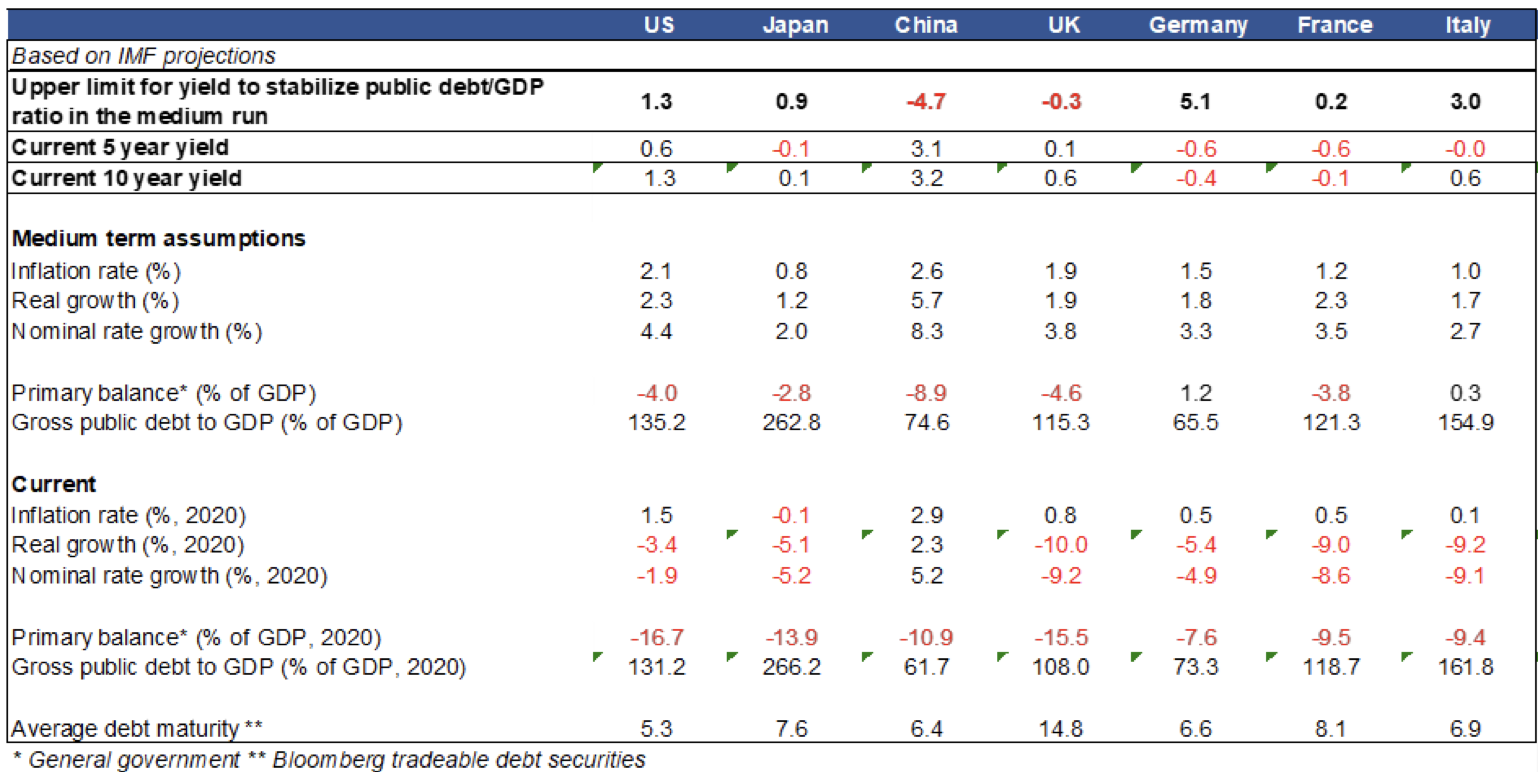 As evident, many nations are either at, or approaching this level. A word of caution is that the table compares the sustainable interest paid on the overall stock of debt with current spot market yields. But it nevertheless gives us a rough estimate of how much room there is for yields to rise, given fiscal projections.

The two defining factors here are nominal GDP growth and the primary balance. The most elegant way to grow out of debt is most likely to increase potential GDP growth and inflation. Higher inflation may not please the older generation, but is nevertheless effective in lowering the debt/GDP ratio (of course not rampant inflation, which undermines planning confidence and thereby growth). Improving the primary balance, the balance of a government’s receipts and expenses while ignoring interest payments, can already prove a bit more painful, but is a powerful tool. This is when governments will start talking about raising taxes and cutting spending. While this may sound like good old austerity (higher taxes or cutting government spending), since the aftermath of the ’08 global financial crisis authorities have tried to move more towards ‘smart austerity’, which targets inefficiencies in public systems. This sounds politically more palatable, but may be harder to implement as it requires structural reforms.

In the current situation, reverting to any form of austerity does not appear like the smart option, given this reduces the demand side which all other policy measures are trying to stimulate while the virus-induced wounds are still apparent. While we all hope for higher nominal GDP growth, in the meantime there is the option to keep the pressure off governments by suppressing borrowing costs with the help of central banks. What this means is that we may well be in for another extended round of ‘financial repression’ (last seen post-2008) from the world’s central banks, namely huge asset purchases crushing bond yields and forcing the ‘risk free’ rate of return down. In that environment, inflation-protected assets like equities can do very well.