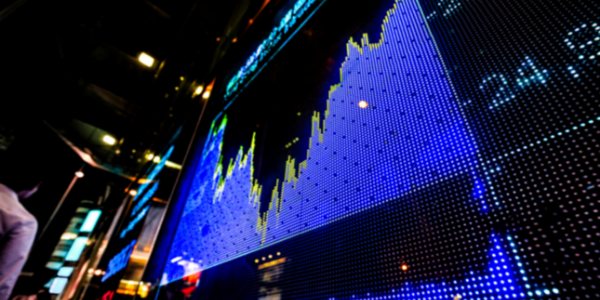 During a week when global stock markets continued their more gradual upwards trend, government policy was in full focus, but offered little in support. For the UK, it looks like ‘out of the frying pan into the fire’ when official lockdown ends next Thursday, with the vast majority of England under tighter restrictions than before – and for an indefinite period of time. Before that, the Chancellor of the Exchequer Rishi Sunak delivered his Autumn spending review in sombre style. The UK’s “economic emergency has only just begun” warned Sunak, adding that debt-financed pandemic spending is “clearly unsustainable”.

Sunak’s downbeat tone was backed up by a report from the Office for Budget Responsibility (OBR), which forecasted a £30 billion hole in public finances by the middle of the decade. As well as plunging Britain into its deepest recession in over 300 years (although perhaps also the shortest), government borrowing is set to rise to its highest level in peacetime. In typical belt-tightening fashion, the Chancellor added: “We have a responsibility, once the economy recovers, to return to a sustainable fiscal position,”

This hints at tax rises or spending cuts over the medium and long-term, but Sunak made no comment on which of these he would prefer. The Institute for Fiscal Studies (IFS) nonetheless took the November outlook at its word, and is predicting more than a £10 billion a year cut to departmental spending plans from next year and beyond. The IFS is also assuming that emergency pandemic spending will end next year, as well as the temporary increase in Universal Credit.

However, all of that is also assuming that Brexit negotiations deliver a happy ending for the UK. According to the OBR: “The Treasury, understandably, could not provide clarity on the ultimate outcome of negotiations, and we continue to base our forecast on the assumption that a deal is reached”. We discuss Brexit developments in a separate article below but, needless to say, if no deal with our largest trading partner is forthcoming, the UK’s fiscal and economic outlook will be considerably worse.

As we have written before, fiscal conservatism at this time would likely be disastrous for the economic recovery. With swathes of the population still unable to go about their business as usual, cutting off support would choke any semblance of a recovery, and undermine compliance with COVID restrictions out of sheer necessity to survive. And, with central banks pinning down bond yields at historic lows, the future costs of not spending enough now is much higher than the danger of spending too much (as evidenced by capital markets rewarding those countries committed to decisive fiscal support). The Chancellor will no doubt be aware of this, which begs the question: What is driving his mixed fiscal messages?

We suspect that, unlike what has been suggested, Sunak’s fiscal floundering is neither ideological nor purely indecisive, but tactically political. With the crisis dragging on, the Treasury must toe a fine line. On the one hand, it must convince the population it will offer unlimited support through the pandemic. On the other, it must convince capital markets and the money-trusting public that the government and the Bank of England are not running a money-printing scheme – or at least not one any bigger than comparable nations. If it fails on the first count, confidence will plummet, unemployment will spike and a full-blown ‘classical’ recession will ensue. If it fails on the second, it risks undermining confidence in its currency value – leading to financial instability which leads to a similar outcome.

The first risk is most certainly the more pressing. As such, we expect the government will borrow, the BoE will buy debt in similar proportions with money only they can create, and we can all just keep our fingers crossed that the recovery strategy works, and that our economic growth can outgrow the risen debt and burden it may bring much further down the line. In the meantime, government hints at fiscal restraint need to be seen as an expectation setting tool more than forward guidance.

Turning to the US, Republican politicians appear even more hawkish than British Conservatives. To make matters worse, this is happening just as infection rates are spiking as the second wave is spreading across the country. The Republican Party congratulated itself on passing the CARES Act in March, which provided capital to the US Federal Reserve (Fed) for business loans and increased unemployment benefits. Loans were underutilised in America’s first wave, but unemployment benefits provided a crucial backstop, helping build household precautionary savings.

Both are now set to be substantially reduced or removed at the end of the year – despite the widespread surge of the virus. The resilience of the US stock market is a good sign for economic expectations, as are the Fed’s statements that it will continue giving support, despite the removal of some backstop funds. Meanwhile, promising vaccine news gives hope that further support may not be needed for the recovery to get underway. Currency markets tell a different story, however. The dollar moved sharply lower against the Euro this week, suggesting a more subdued outlook for the US economy.

In Europe, despite political obstacles to the recovery plan (as covered last week), fiscal expenditure is increasing. Having extended its lockdown to 20 December, Germany is set to borrow €180 billion in 2021, compared to the €96 billion predicted in the summer. Net borrowing will be slightly less than this year’s €217 billion record, but such is the strength of Germany’s fiscal position that this will translate into just under €500 billion in total crisis spending.

With the German government agreeing more emergency aid to businesses and increased vaccine spending, the support will likely spill over to the rest of Europe (and the world). European fiscal spending is backed by substantial support from the European Central Bank (ECB). In her recent speech to the European Parliament, ECB President Christine Lagarde was forthright that increased support is a must. It will therefore continue to conduct stimulus through more bond-buying, with the €750 billion Pandemic Emergency Purchase likely to rise to offset the new debt next year, and more subsidies to European banks to lend via the targeted longer-term refinancing operations (TLTRO) facility.

It is a peculiar turn of events that leaves Europe – usually the fiscal miser of the developed world – as the most promising area in terms of government support spending. Both US and UK governments would do well to take note – with the world still under heavy restrictions amid the deepest recession on record, a decisive and sustained economic recovery, not a balanced budget should be the focus of governments. 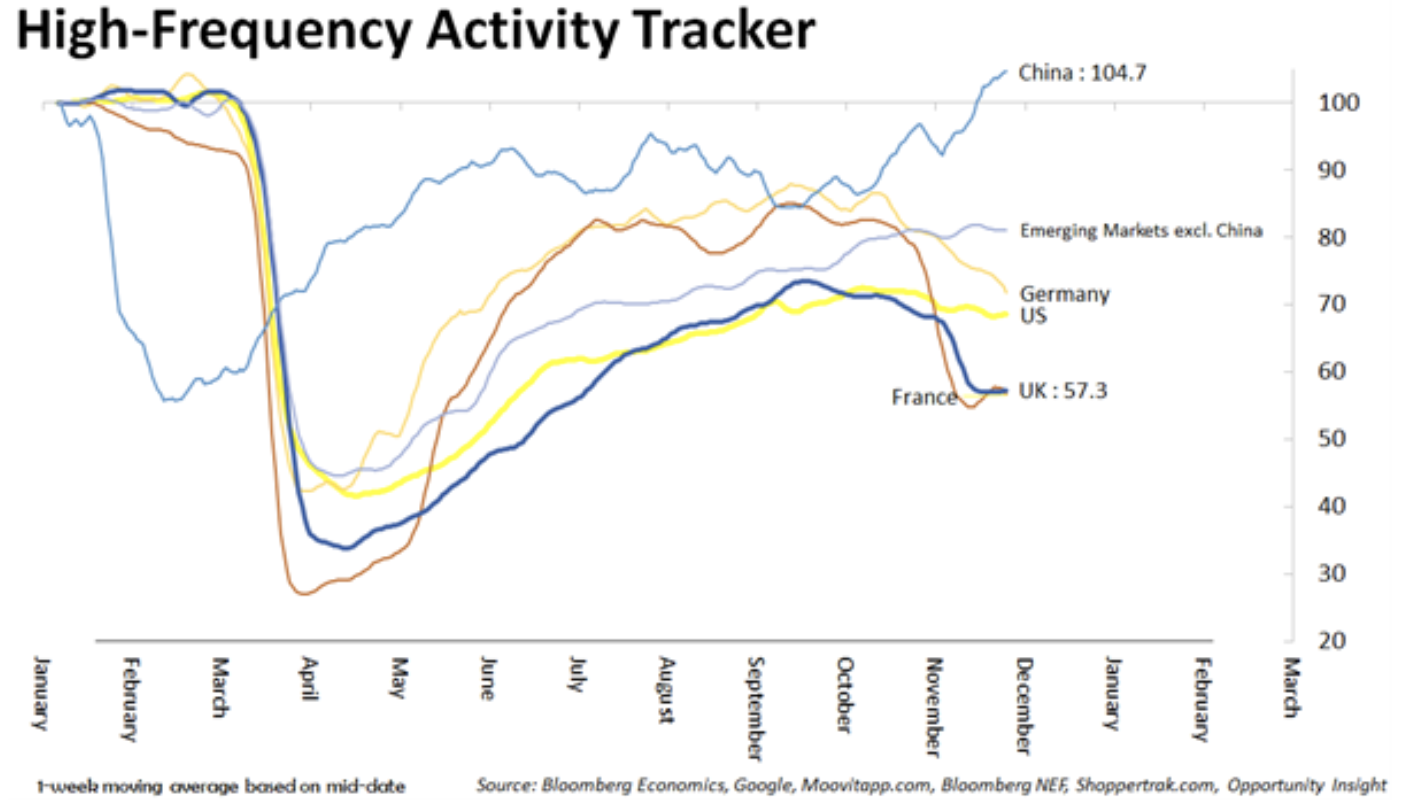 The high frequency tracker tells the story.  Europe has wilted in the face of the Autumn virus surge, with Germany’s swoon explaining its fiscal actions this week. The US will probably follow the decline as the second wave takes hold there too, even if it is not likely to suffer a repeat of the spring. Meanwhile, China is in full economic recovery mode. Yet, this has led to a classic situation for markets. Having anticipated the growth, markets are facing the possibility that China’s policy reactions may now be starting to work against more equity upside.

The unexpected default of three state-owned enterprises, the rise in both short-term and long-term interest rates, and the strength of the Renminbi, have tightened China’s financial conditions, whereas they continue to ease elsewhere. This does not mean economic growth is about to turn. Far from it, the fiscal spending continues strongly. However, away from its own spending, the Chinese government has recently been surprisingly swift in “correcting” 2020 support policies which might cause future systemic instability. In particular, earlier in the year authorities pushed banks to lend indiscriminately to small and mid-sized enterprises to stimulate the recovery beyond their own fiscal stimulus. Now they are pushing for discrimination and recognition of loan losses.

We are at an early stage, but when policy tightens, stock markets may not perform in line with an economy’s growth. Investors who focused their investment allocations solely on China may soon be disappointed to find that China’s market-friendly ‘goldilocks economy’,  is giving way to more measured market valuation drivers, even if that is for very different reasons than elsewhere.