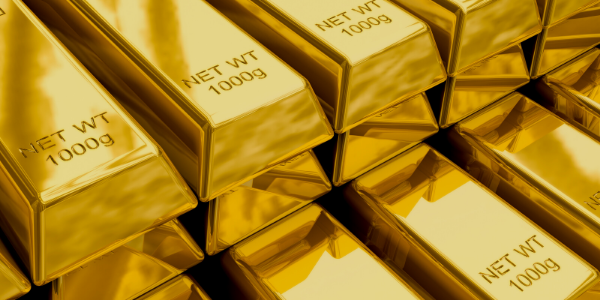 Gold prices have been on a good run lately. On Thursday, gold reached an intraday high of $1898 per troy ounce, within touching distance of its all-time high of $1921 back in 2011.

Physical or safe-haven assets typically benefit from periods of unease or uncertainty. Gold’s credibility comes partly from its centuries-old use as a store of value, but also from its physical qualities. Its weightiness, durability, malleability and downright attractiveness make it physically ideal as a coin. It is decidedly old-school – it doesn’t require a plug and will always be there – even when your internet access isn’t. 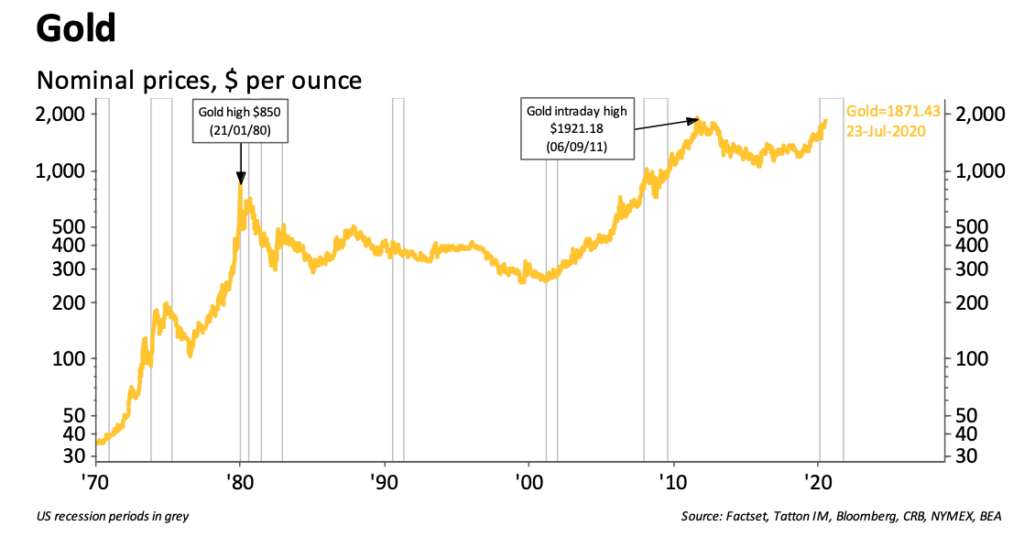 To some extent, gold’s main use is still as a currency, an alternative to the ‘modern’ ‘fiat’ (Latin for “let it exist”) currencies of major nations – which are today supported by the Central banks. In more normal times, those currencies have an advantage over gold: you can place them in a bank and earn some interest. Gold’s very physicality means it does not generated interest.

Of course, times are not normal. On top of ever-present uncertainty, the currencies of the major nations, with interest rates around 0%, no longer give a return. At the same time, many central banks are creating more and more of their own currencies to funnel into the financial system.

Central banks’ money printing exercise is unlikely to go on for the long-term; central bankers will be expected to taper their operations when the economic crisis abates. But in the meantime, the US Federal Reserve (Fed), the Bank of England and the European Central Bank have allowed governments to borrow in the open market, and soaked up almost all of that debt by buying it from the original purchasers with newly-minted ‘reserves’.

While the amount of fiat currency in circulation is increasing, the amount of gold available cannot be created on a whim – short of fraud. So, it should not surprise that gold is now relatively attractive. It does well when the incentives for central banks to print more money are greatest, when economies are struggling, when real activity and particularly employment is weak.

Indeed, even before the global economic shutdown, central banks had generally come to the conclusion that their economies could do with more activity and higher employment levels. To that extent, the Fed had already undertaken a review of its policy, one which many believed would lead to a long period of low rates, with inflation allowed to run up to a rate which would have induced rate hikes before.

It is unlikely that short-term interest rates will be allowed to go below 0% in the US or the UK for any meaningful period. But the economic damage caused by COVID has made it only more likely that, to boost economic activity, rates will be held substantially below inflation for quite a long period, possibly multiple years.

One can see the market’s effective pricing of this by looking at bonds which give a real (inflation adjusted) yield. In the UK, we have inflation-linkers, bonds whose capital and interest payments rise in line with inflation. For some time, investors have been prepared to buy these bonds although the return does not compensate for inflation The UK ‘real’ yields have recently been at around – 3% per year, while in the US, this week the ten-year real yield has fallen to -0.9% (investors receive a return of US CPI minus 0.9%). Gold has moved alongside, as the chart below shows. 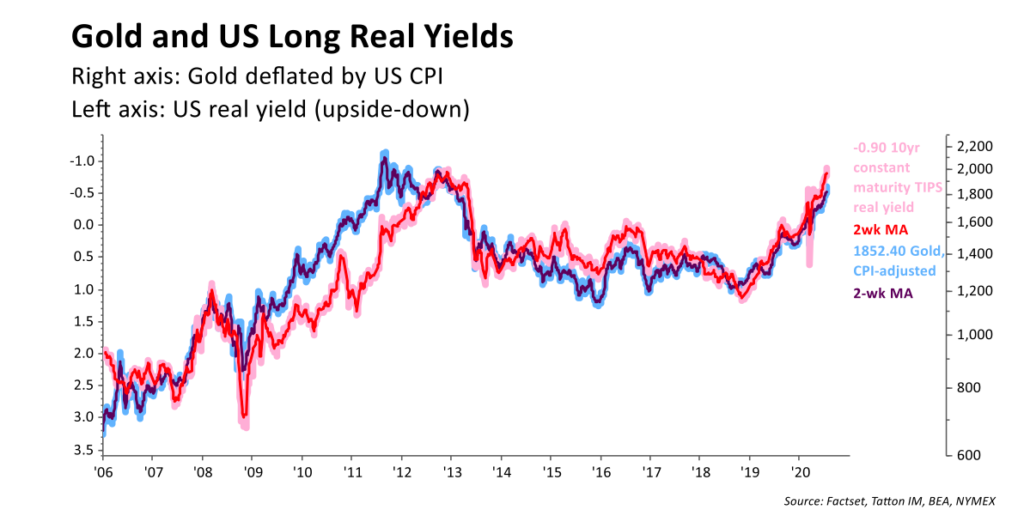 Indeed, the relationship between gold and long-term US real yields has rarely been as tight.

Another interesting comparison for looking at the underlying economy is the relationship between gold and copper. Gold is useful as an electrical conductor, but copper is nearly as good and decidedly cheaper. Modern infrastructure uses it and governments are particularly keen on increasing valuable technology businesses. It has been very noticeable that copper demand has become tied to China’s growth, especially when the government has tried to stimulate their economy – as they are right now. The price of copper is, in effect, a proxy for economic activity.

The chart above shows an index of the ratio of gold to copper, with the grey bands showing US recession periods. There are some notable periods of trending, with China’s first bout of expansion (from the early 2000s) driving copper’s price substantially higher, so the ratio fell.

Gold tends to outperform ahead of recessions, as returns from other assets become less certain. But when activity picks up and the recession ends, demand for copper increases (since technology production picks up) and the ratio falls back.

Recently, the ratio has indeed swung in copper’s favour. Gold has done well, and this could continue if central banks keep suppressing nominal government bond yields while governments shift towards greater long-term levels of investment and activity picks up. That would compress real yields further into negative levels. But right now, while gold has been doing well, copper has been doing better. That’s a good sign for the global economy, and for nominal activity. In turn, leaving aside valuation considerations, it’s a good sign for higher risk assets such as equities.

As a reference, we include a chart showing both gold and copper in today’s US dollars but adjusted for inflation. One thing of note is that gold may be considered a safe asset in some respects. Still, many investors will have thought otherwise in the years after 1980. The log scale rather minimises the outcomes. By 2002, after inflation (which had been falling), gold was 25% of its 1980 peak value, having bottomed at 13%. Meanwhile, at the bottom of the dot.com bust, the US market total return index had risen 1400%, having peaked at around 2500% in 2000. 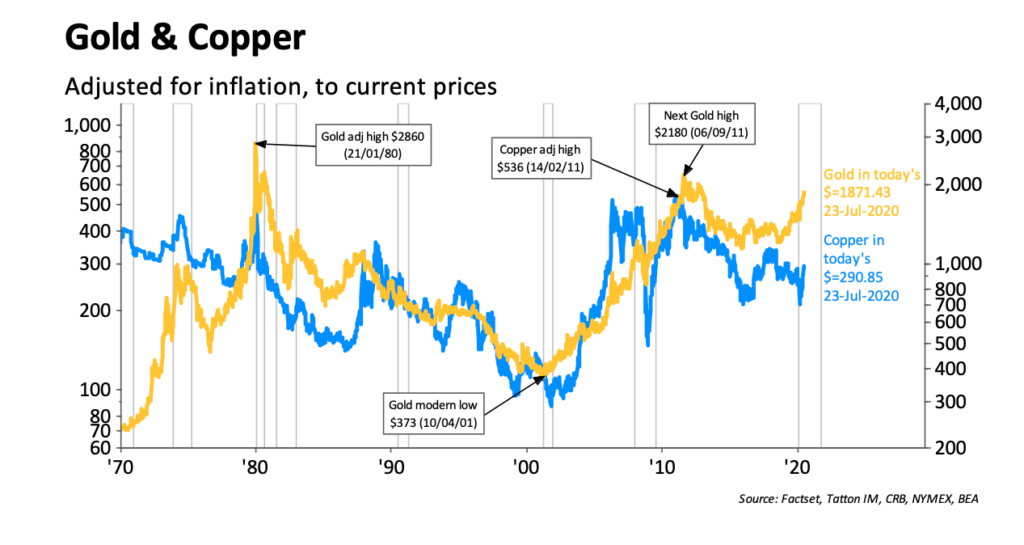