Looking for the bright side in markets 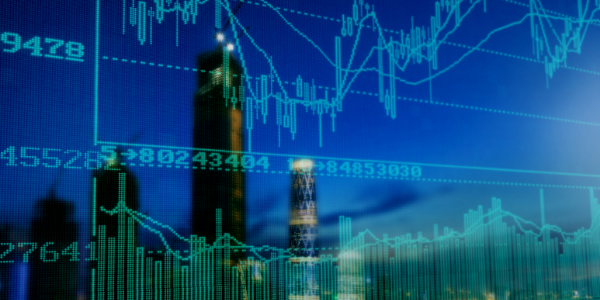 Even though economic prospects appear positive, for capital markets, it’s always a bit more complicated. For investors, the main anxiety is that the economic positivity, based on vaccination hopes and fiscal support, is putting equities in a more precarious position. No one can deny that, on current price-to-earnings ratios, stocks look expensive relative to history. This is not much of a surprise – after all, it is what you would expect when you combine the deepest global recession on record with a year-long market rally.

Current equity prices are based on the eagerly anticipated future, rather than the impaired present. But the risk of being wrong is still quite high and, at the moment, the payout for that risk (the risk premium ~ the average amount of expected corporate earnings relative to the share price) is low. Goldman Sachs research notes that global investor sentiment is in a ‘risk-on’ phase, with a great deal of cash having already flowed into stock markets.

At the policy level, support provided by the world’s central banks should not be underestimated. By flooding markets with liquidity, central banks have pushed down the cost of capital. This has the biggest impact on the least risky assets, government bonds, and flows through to reducing the risks of corporate default. With a lower cost of capital, businesses are able to resume internal investment sooner, which should raise their prospective return. Less overall risk, and at least stable profit growth, should mean investors will accept lower risk premia, and/or buy riskier assets.

The Fed has effectively committed to maintaining an expansionary bias well beyond the end of the pandemic, pumping capital into the US Treasury bond market at an extraordinary pace. In a normal recovery, rising growth prospects would lead to rising real yields on bonds – thereby increasing the risk-free rate and making equities relatively less attractive again. That will not happen this time, in the short-term at least. So, positive surprises in the economy have a very good chance of translating directly into equity price rises, rather than being absorbed by rising interest rate costs.

Of course, private investors might want to sell their (ultra-low yielding) bonds to buy equities, a flow which initially helps equity prices but – as a consequence of the resulting lower demand for bonds – runs the risk of raising the cost of capital (yields) too early. This would kill the expected rise in profits, especially while companies still carry large debt loads from the recent recession. While government bond yields have indeed risen in recent months, central banks will have been comforted by the fall in credit spreads (the risk premium yield amount corporates have to pay above the government bond rate) which have offset government bond yield rises. However, they will watch bond market moves closely, and we expect they will intervene if yields rise sharply.

Goldman Sachs has been looking at indicators of various investors’ risk appetite. These indicators provide reasonable confirmation that US retail investors have become a far more significant influence in market moves. Over the last year, personal incomes have been bolstered through government transfers, while personal spending has been constrained. The consequent rise in savings has also led to some interesting events, including the soaring rally of Tesla and, last month, the shock surge upwards in GameStop’s share price. That price activity led to turmoil among hedge funds, many of which were shorting GameStop and similar stock targets of the online forum Reddit community. It is telling that those hedge funds losses and following spike in volatility have already been quickly adjusted for, with markets recovering without any wider contagion.

One might think this would lead to capitulation from the pessimists, and investors of all hues would now be positioned too heavily towards equities. But, as the graph below shows, from a historical perspective, the overall positioning towards equities as expressed by their ‘Average percentile of indicators’ is in line with the economic positivity. And, although one might expect growth optimism to wane, a recession is often followed by a longer period of growth, especially if policy support is maintained rather than curtailed early. 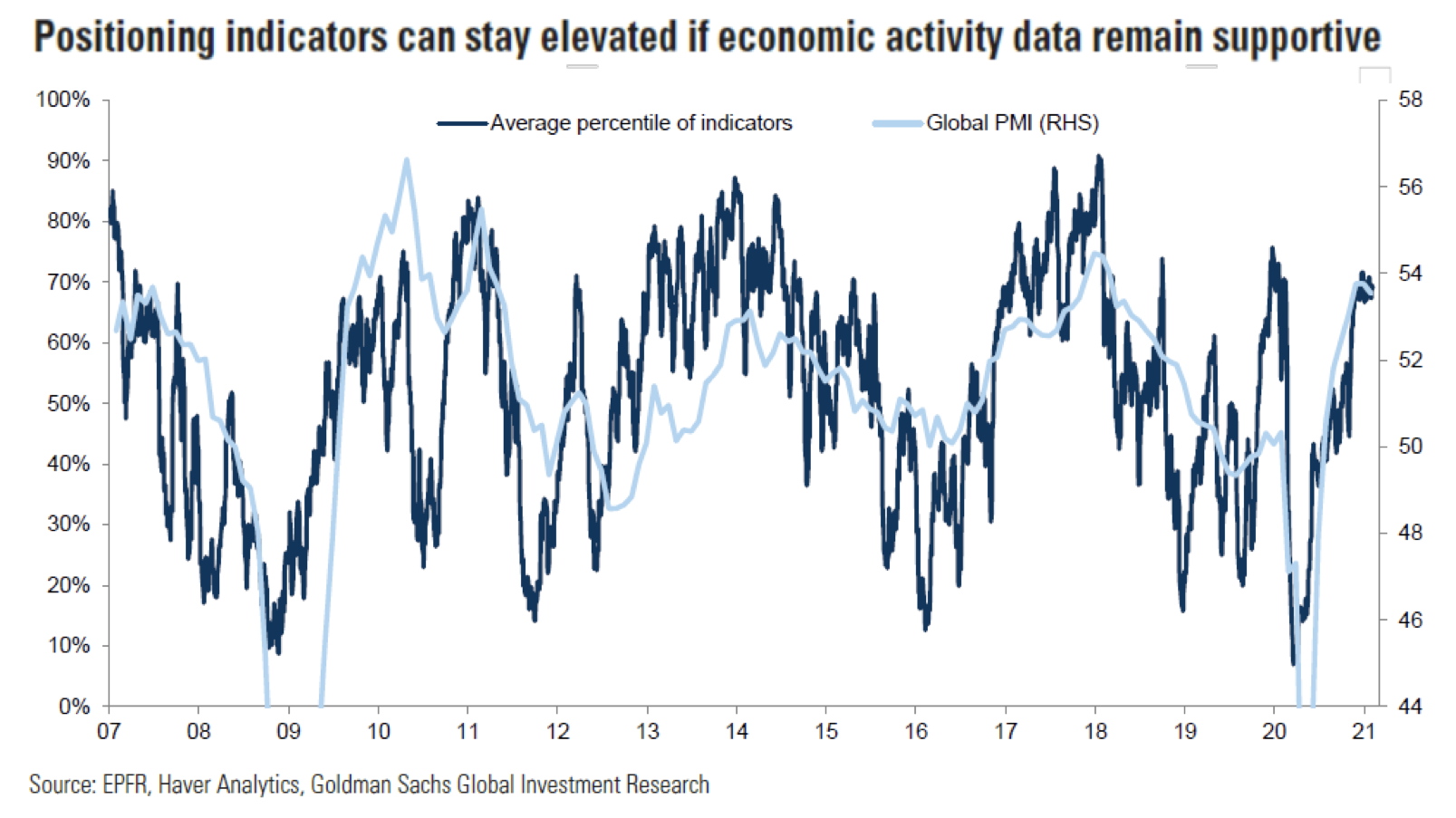 The dark blue graph line is an aggregate of various indicators. Goldman Sachs also makes the case that the components show there are still some big players waiting to join the party. While fund inflows into risk assets have been extremely strong recently ($250 billion since November), this comes after a period of sustained outflows, amounting to $700 billion since 2018. There is still a significant amount of capital sitting in money market funds which, if utilised, would provide further support for equity prices.

Some types of institutional investor are more “mechanical” than others. According to Goldmans, some quantitative strategies such as risk parity, price momentum (often known as CTA) and option volatility sellers (VIX) have quite a lot of room to buy more equity risk. A sustained rise in prices (especially if it was relatively steady) would cause them to increase their positions, as the graph below indicates: 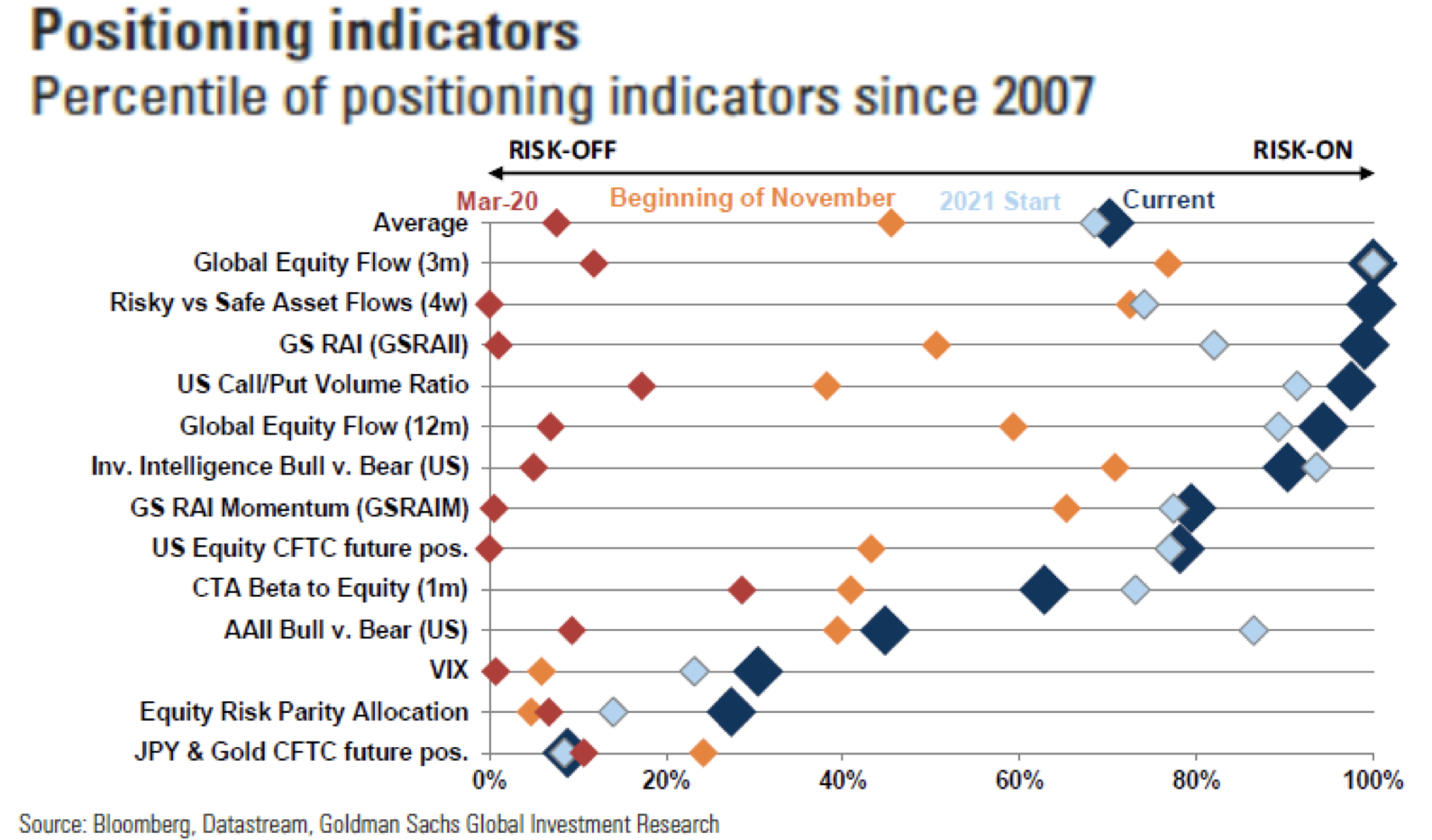 This week, the retail crowd (among others) is once again trading into Bitcoin, after the Tesla executive board announced it had accumulated a $1.5 billion digital currency position. We will not get into the pros and cons of Bitcoin or cryptocurrency generally (but will happily forward our back catalogue of Bitcoin-related articles), however it is notable that Tesla’s announcement led to such a surge in its own share price. CEO Elon Musk has become something of an icon for the online retail investor crowd, and seems to have the ability to sway piles of fast money into assets with little more than a tweet.

Goldmans makes a good case that other investors may join in. However, Bitcoin could just as easily go the other way as well – as it has so often over the past years – given it remains merely a speculative trading asset, one which neither fulfils the minimum requirements of a currency nor that of a yield-bearing investment.

Newer technologies have made personal investing much easier, and retail presence is now a serious factor to consider for market moves. The conditions for retail inflows remain positive at the moment – bolstered by increased fiscal support in the US. But as we move into the second half of the year, and the global economy begins to reopen, this could well change. Much has been made of the ‘exit strategy’ for policymakers – with both governments and central banks forced to handle their tapering of support policies sooner or later. Something similar can be said for individuals and households, whose short term savings have contributed substantially to market optimism over the last year.

We could well end up in the counterintuitive scenario where – when the recovery comes into full swing – it could prove to be a negative for markets. Once people are spending the money that might otherwise find its way into markets, a substantial source of liquidity could dry up. Fortunately, this is likely to be offset by the re-emergence of institutional investors keen to join in the cyclical investment rotation. Whether it will be enough to prevent net outflows is hard to say.

Overall, the conditions for a continued uptrend in markets remains, for now. At the very least, it seems unlikely that we will see sustained downward pressure from here. Policy and sentiment remain hugely supportive, and the economic backdrop equally has a long way to go – up. When that ‘de-mob happy’ recovery actually kicks in, though, things become harder to predict.