More tunnel before the light 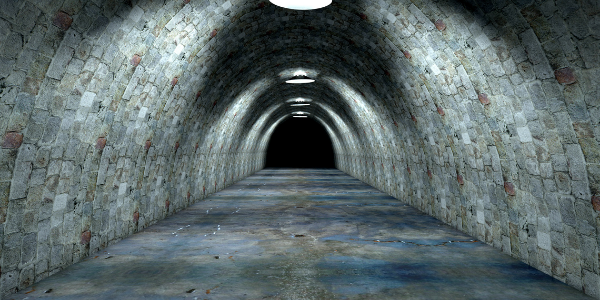 The November rally in stock markets finally petered out this week as it felt as if ‘November finally got the memo about 2020’. This was despite further positive vaccine news that bolstered optimism for next year. On Monday, US firm Moderna announced that phase 3 test results of its messenger RNA based vaccine had a 95% success rate, confirming that messenger vaccines work, after the Pfizer & BioNTech messenger vaccine – had also produced above 90% effectiveness a week earlier. The latter, two-shot vaccine, could start being given to the UK’s vulnerable people before the end of this month, with the second dose being administered three weeks later. The early recipients may achieve the prospect of a proper Christmas with their families – updated rules permitting. Meanwhile the one-shot vaccine from Oxford/AstraZeneca is likely to begin distribution just after Christmas. By March, a million people a week could be receiving immunisation in the UK.

Still, the virus has not gone away just yet. The case numbers, which had been stabilising at the end of October, jumped meaningfully last week in many parts of the western world. That said, two weeks in to the UK’s second ‘lockdown’, and case numbers are returning back to the October-end levels and from there will almost certainly decline, much as they have done in France and Italy. As the high frequency activity tracker graphs below shows, France’s activity is no longer contracting, and the UK is highly likely to follow suit.

But, as China’s diverging curve shows, ‘getting shot of the virus’ is essential for a return to normality. The vaccines will almost certainly achieve general immunity next year and, probably more importantly, convince businesses and employees that they should not fear its return.

Nevertheless, resurging public health pressures across wider Europe and the US have now worsened enough to dampen the capital market euphoria of late, as it is becoming clear that despite the multiple vaccine good news stories, for the economy, households and government borrowing, the 2020 narrative of ‘worse now, better later’ is bound to be with us until at least the end of the year. 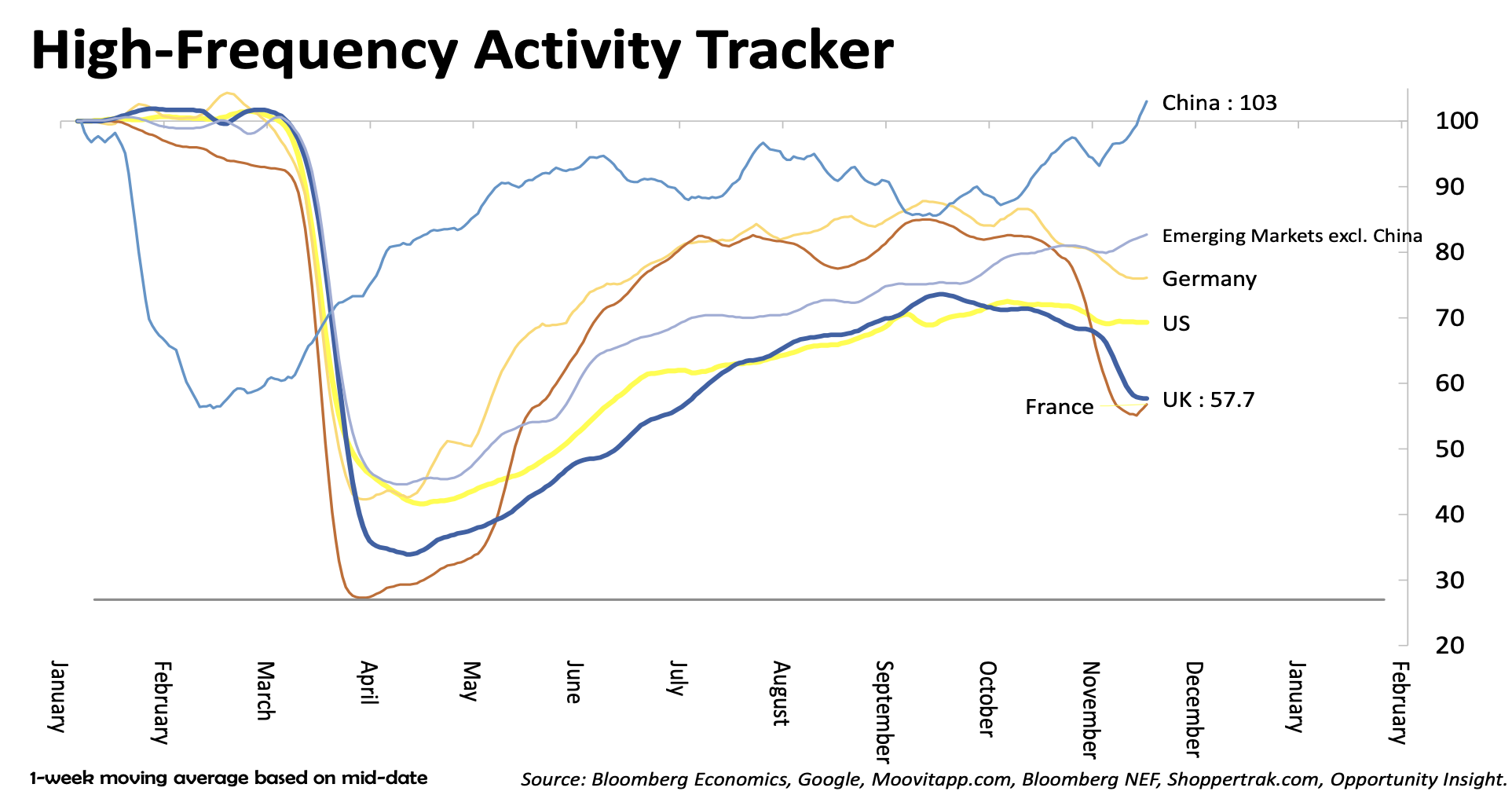 Beyond that, what might we be concerned about to spoil the perspective of a strong recovery in 2021? During a research (Zoom) meeting with Karen Ward, JP Morgan Asset Management’s EMEA Chief Strategist (and frequent columnist for the Financial Times), she focused on her observation that recent consumer prices have risen more in the US (and the UK) than economists had expected. The chart below, plots the relative (not absolute) difference between expectations and actual readings. Karen stressed that this is not to say inflation is currently a problem, given the sharp slowdown in global activity and the rise in general unemployment. However, she pointed out that the supply-side disruptions (manufacturing, distribution, services) may be more extensive than realised.

As activity resumes through 2021, we might see more general inflation if production capacity growth does not keep pace with pent-up demand being released. There may also be some bottlenecks in sectors such as housing construction, where the pandemic has created secular changes in the things we want. 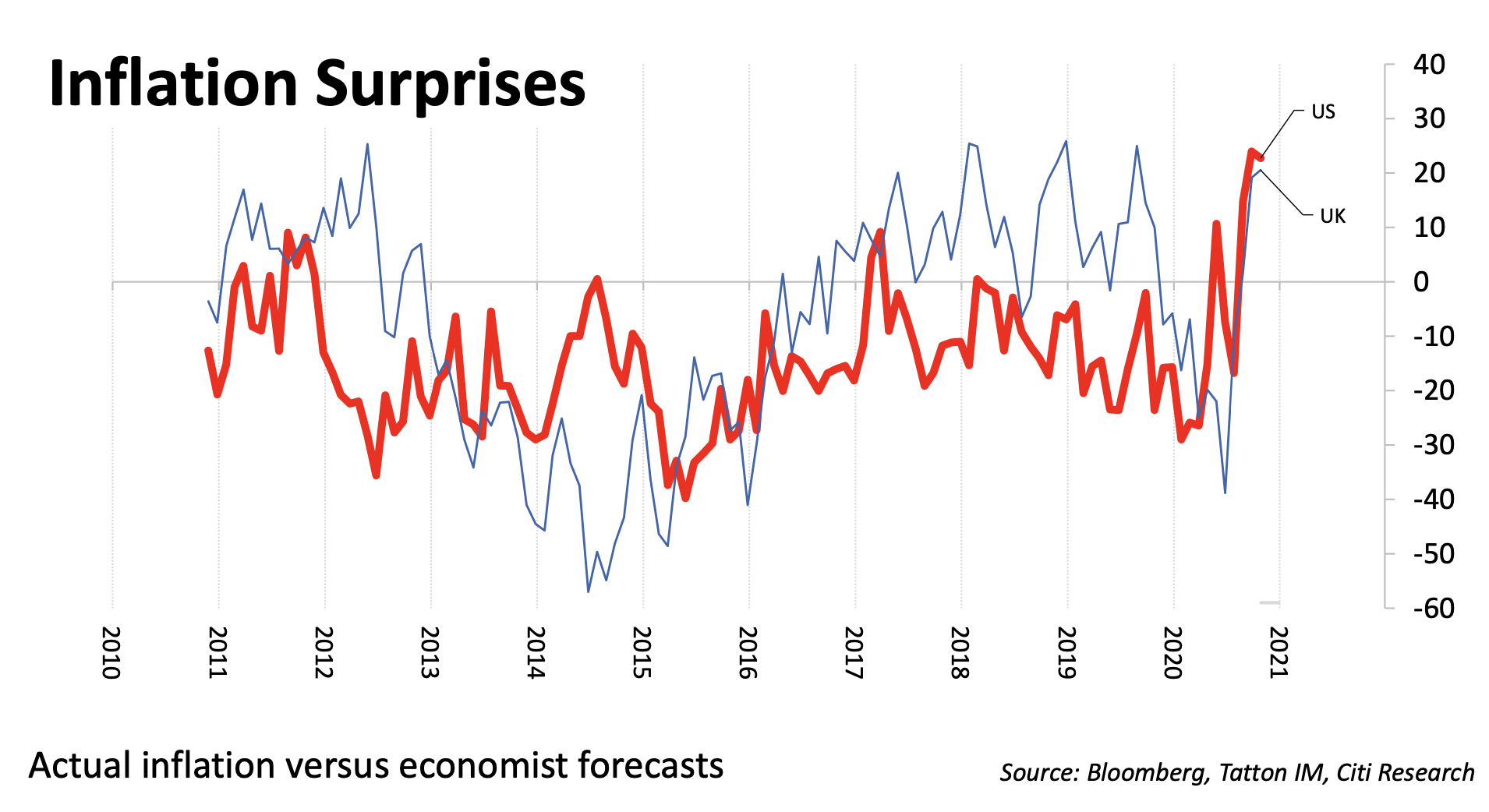 This could be bad news for those sectors that that were driven up by falling yields and lower inflation expectations, but it could be positive for the value/cyclical sectors that have been laggards over the past decade. The US National Association of Housebuilders’ index of prospective buying shot up to a record high, albeit from very low levels in the Spring. If consumers become a bit more confident about employment prospects, then construction could become a strong driver for the economy. Although their capacity to surprise is remarkable, the tech darlings like Amazon will probably have a harder time competing in this area.

Another near-term market headwind is that despite the demise of the Trump campaign’s lawsuit in Michigan, and the recount in Georgia having increased Biden’s total votes, markets’ political concerns in the US have not gone away. The fear is that the Biden presidency could see a reprise of the hawkish and obstructionist agenda enacted by the Republican-led Senate, similar to that experienced under the Obama administration. On Thursday, US Treasury Secretary Stephen Mnuchin pressed US Federal Reserve Chairman Jerome Powell to cease programmes lending to small businesses. Meanwhile, the Senate and President have blocked the passage of more fiscal stimulus, and on Wednesday, Senate Majority Leader Mitch McConnell sent everyone home for Thanksgiving, setting up a frantic December of negotiations when the Senate reconvenes.

Thanksgiving usually sees a huge migration in the US. Next week’s holiday will be different. The US second wave virus outbreak is not now about the Democrats’ large cities. It is rising in every state except Hawaii and North Dakota. It might lead to the same sharp contraction in US activity as Europe is experiencing but this is not a sure thing, given the US reluctance in Republican dominated states to entertain any form of lockdown or even enforcement of mask wearing.

On the back of thus dampened recovery and growth prospects, long-term yields tracked back down, indicating that the market has such concerns, and tech stocks – 2020’s fear trade – regained some of their composure. Nevertheless, investors remain quite bullish in taking risk. According to the longstanding and authoritative survey from Bank of America Securities (previously Merrill Lynch), global economic growth and profit expectations are running at a 20-year high. The “reopening rotation” into previously laggard (“oversold”) sectors is likely to continue through this quarter, BofA believes. But for the more speculative end of the investment community, the suggestion is to ‘sell the vaccine’ in the coming weeks and months: “we’re close to ‘full bull’” is how they put it.

That probably means there is a growing chance of volatility as we head into December. Markets are liquid at the moment, but in the absence of a continuous flow of good news, it is possible that institutional investors could lock in rather unexpected 2020 profits and shut up shop earlier than usual this year. This could prove more likely to be a year-end consolidation than a (more concerning) correction – given the persistent expectation of much better times in 2021.

Despite the strong indications of China’s growth, its stock and bond markets came under pressure this week after three unexpected corporate defaults of state-owned enterprises (SOEs). “State- Owned” does not mean central-government-backed. These firms are involved with local governments and the relationships are not “backed”. A lot of these firms are at risk because President Xi Jinping is battling local states for power. This shakeout is a long-term positive for China, but has the possibility of causing a similar consolidation of Chinese risk asset markets as elsewhere, even if for quite different reasons.

Lastly, Brexit. A deal is rumoured to have entered the room through the back door, just as Dominic Cummings carries his box files out of the front. The absence of negative press briefings from either side, and the positivity of currency markets, provide some evidence that it may be more than rumours. However, as stated many a times before on these pages, do not expect that the timelines painted by politicians as “absolutely final” to be actually that – pan European negotiations never finish when they should – but conclude with some form of compromise, they almost always do.