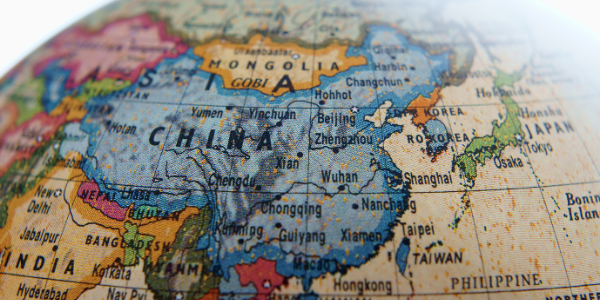 Bigger is better in trading blocs. And last Sunday, 15 East Asian countries signed an historic accord to form the world’s largest trading bloc, containing a third of the world’s population and accounting for around 30% of global GDP. The Regional Comprehensive Economic Partnership (RCEP) is bringing together the ten ASEAN members with their Northern and Southern neighbours in Asia- Pacific: China, Japan, South Korea, Australia and New Zealand. RCEP nations have now committed to lower tariffs progressively, counter protectionism, boost investment across borders and allow freer movement of goods within the region. 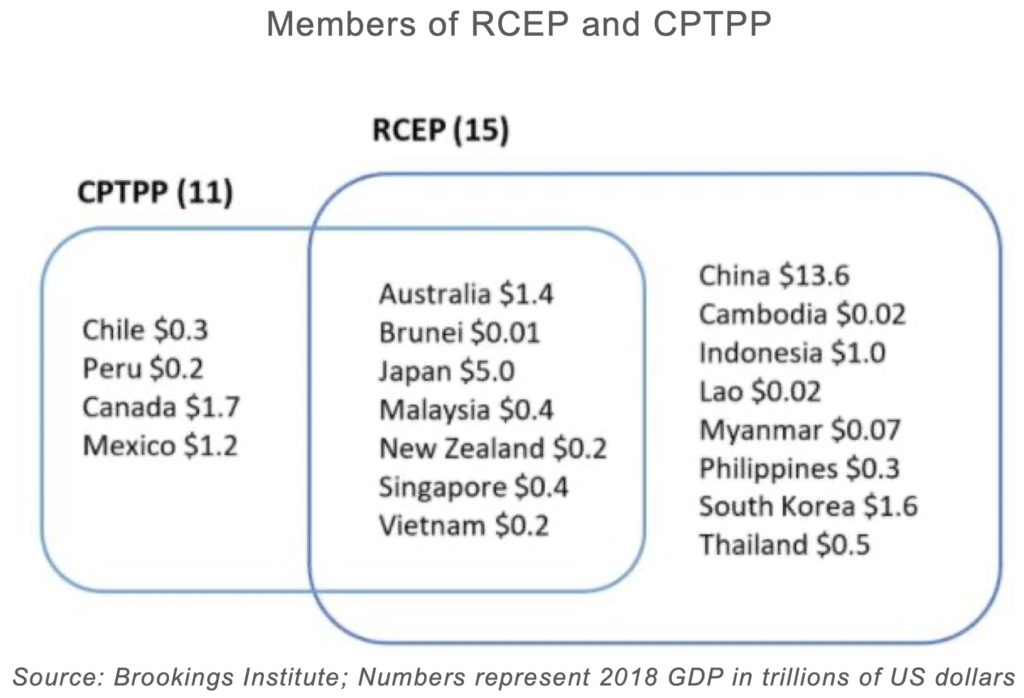 The RCEP is far from a union and, in terms of tariff slashing, it is not as comprehensive as the CPTPP (the 2018-born successor to the Trans-Pacific Partnership). But the sheer size of this new trading bloc – as well as its membership – makes it a significant economic step forward for the nations involved. Southeast Asian countries stand much to gain in the medium-term, while longer- term cooperation will benefit even the biggest nations in the RCEP, namely China and Japan.

It is hugely significant, for example, that a single trading bloc generating 30% of global GDP can exist without featuring either of the world’s largest single markets, the US and EU. The RCEP and the CPTPP, which is also dominated by Southeast Asian nations, are the only major multilateral trade agreements to have been signed in the Donald Trump era. Trump famously withdrew from TPP negotiations in 2017, claiming America was getting a raw deal on the world stage. But as a result, both agreements now substantially increase the prospects for trade and economic integration within Asia itself.

According to the Washington-based Brookings Institute, the RCEP is expected to add around $209 billion per year to world incomes by 2030, and around $500 billion of turnover to world trade. Southeast Asia in particular stands to gain much. The region on its own should benefit by about $19 billion annually over the same period. Beyond those direct benefits, it gives a region with significant growth potential and a massive internal market (ASEAN has a population of 660 million) access to some of the largest domestic economies in the world – China, Japan and South Korea, as well as Australia. ASEAN countries will likely now have greater access to funds from China’s Belt and Road Initiative, strengthening transport, energy and communication links. It’s also worth noting that the RCEP’s provisions on tariffs will be phased in over the next 20 years, so trade benefits will build-up over time.

Over the long-term, the importance of the deal will likely be in what it signals, rather than what it has already delivered. While the RCEP does much to stimulate intra-Asian supply chains, however, details on improving intellectual property protection, labour laws, the environment and state intervention are lacking. What it does do, though, is commit East Asia’s three largest economies to mutual integration for the first time in modern history.

Relations between China, Japan and South Korea have been fraught for the better part of a century. Although the benefits of economic integration in Northeast Asia have been obvious for years, it took significant brokering from ASEAN to get past bitter historical divisions. Last year, Japan confirmed that negotiations toward a trilateral free trade agreement between the three countries would begin as soon as the RCEP was signed. Earlier this month, China’s President Xi Jinping promised to speed up negotiations with Japan and South Korea.

While neither Japan nor Korea may find it politically palatable to admit, both have benefitted massively from China’s decades-long growth spurt. In recent years, China’s transition from a labour-intensive export economy to one more focused on domestic consumption has seen growth spill over into its highly-developed neighbours. With the People’s Republic now intent on generating business investment and attracting foreign capital, Japan in particular looks like an ideal partner. We suspect the recent rally in Japanese stocks may have something to do with this, with investors reassessing the country’s growth prospects in light of a closer relationship with China.

We wrote recently that there is now a strong investment case for China in the near-term, even though risk considerations remain an obstacle. The world’s second-largest economy went through its COVID shock early, and is now the only major economy on course to grow this year. Moreover, despite provoking numerous geopolitical tensions – particularly after crackdowns in Hong Kong and Xinjiang generated disdain and punitive measures from the US and EU – its political backdrop looks increasingly stable compared to the fractious environment in the West. With the creation of the RCEP, it now looks like East Asia is entering into a new phase of political and economic progress. 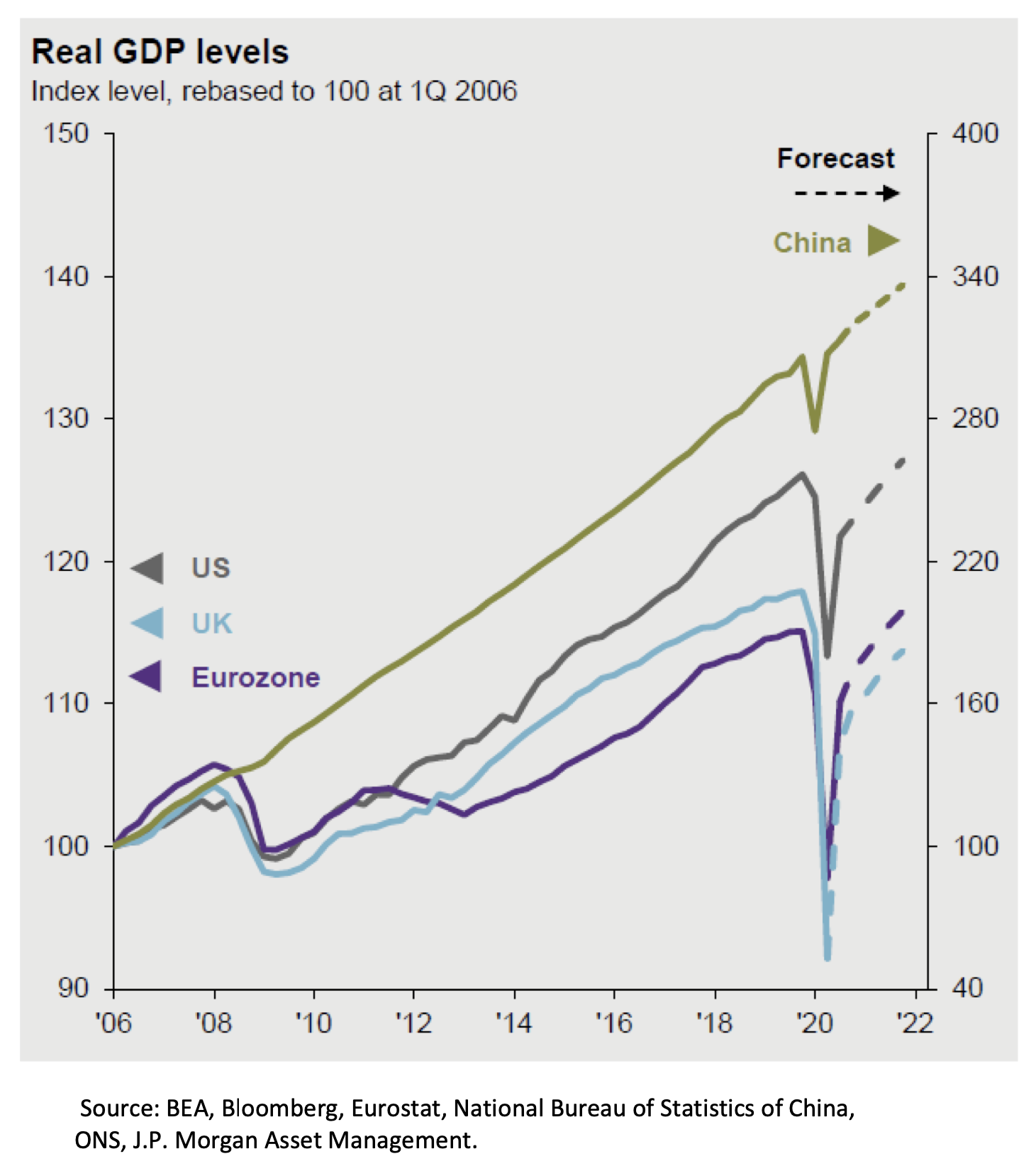 We suspect this will significantly increase capital flows into the region as and when global political tensions begin to abate, and that these forces will only increase should divisions in the US continue to hinder progress. On that front, while it is tempting to think the combative days of Trump’s trade wars are behind us following his election defeat, this could prove somewhat hasty. Anti-China sentiment is a rare point of bipartisan support in Washington, and President-Elect Biden could well be in a difficult position if Trump spends his remaining days in office pointing the finger at China. For the Democratic party, all eyes are on January’s Senate run-off elections in Georgia. The last thing an incoming Biden administration will want is to be seen as weak on the international stage.

Looking elsewhere, one of the most interesting points of the RCEP is what it will mean for India. Having been one of original brokers in RCEP negotiations, the Modi government pulled out of the deal two years ago, partly because of US pressure and partly because of its own conflicts with China. Politically, cooperation with China is a bitter pill to swallow in India. But if India remains outside of the RCEP, it risks falling behind its rapidly-growing neighbours. The rules allow India to join the RCEP at any time after it comes into effect and, if US politics allow it, we suspect the government to sign up at some point down the line.

Even if it does not, the RCEP has huge potential as a trading bloc. The combination of the China- Japan-Korea triumvirate together the rapidly-developing ASEAN has all the ingredients to be an economic powerhouse in the future. It may take years to see the effects, but make no mistake: RCEP could be a milestone in an eastward global economic transition.