US partisan politics could leave states feeling the pinch 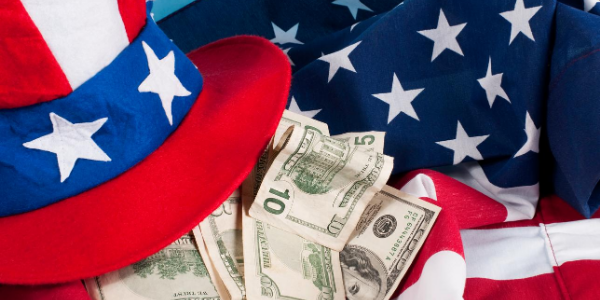 In dealing with the economic crisis – just as with the virus itself – policy is crucial. Throughout the worldwide economic shutdown, US authorities have joined their global peers in providing intense and sustained support to a shell-shocked economy. The government’s fiscal aid programs, backed by the extraordinary bond purchasing programme from the Fed, has saved many businesses, and individuals, from going under. Tracking the course of fiscal and monetary policy is therefore an essential part of any outlook on the world’s largest economy. This week, we got an update on both of those fronts.

From the Fed, it was business as usual – or at least the ‘new’ usual. As expected, the FOMC announced it will keep monetary policy loose for the foreseeable future. Interest rates will remain non-existent and extensive bond purchases will continue, with the Fed keen on avoiding any whiff of slowing down the purchase pace. Chairman Powell stressed that the virus is the “central driver of the economy”, affirming the FOMC’s commitment to open-ended asset purchases and its readiness to use its emergency lending facilities. The Fed cannot support the US economy singlehandedly, but it is doing all it can to maximise the chances of a healthy recovery.

Less can be said for fiscal policy. Many of the government’s emergency support measures – including federal contributions to unemployment benefits – expire at the end of July. With cases still spiking across the US, lawmakers from both parties are well aware that renewal of these measures is vital. What they do not agree on, however, is how that should be done.

The HEALS (Health, Economic Assistance, Liability protection and Schools) bill proposed by Republican Senate Majority Leader Mitch McConnell contains a number of support schemes amounting to an extra $1 trillion in new stimulus. If the bill passes, American households would receive another $1,200 from the government in stimulus checks, insurance and unemployment benefits would be extended and schools across the country would receive $105 billion in funding, with an additional $15 billion earmarked for virus testing.

The changes to unemployment benefits are perhaps the most controversial. Under the Republican bill, jobless Americans would see their benefits immediately slashed from $600 a week to just $200. This reduced amount would continue until individual states are able to transition to a system where the unemployed are paid 70% of their previous wages. Crucially, just 20% of that would come from the federal budget, with the remaining 50% coughed up by local state governments. While we may have less of a problem with unemployment support being lowered at some point (even if the timing may be less fortunate), we are more than puzzled with the idea that federal states would have to fund the bulk of the new arrangement.

Compared to the US Treasury – with its huge tax receipts and vast borrowing power – state governments have extremely limited funds at their disposal. Many have balanced budget rules which prevent them from spending more than they receive in taxes, and those states that can run deficits are forced to borrow at much higher interest rates. Lumping local governments with such a big expense could be disastrous, pushing many of them to cut back on spending and choking off economic recovery before it has begun.

We should note straight away that Senator McConnell’s plan faces substantial opposition – even within the Republican party, opinions are divided – and may not get enough support to pass through the Senate. If it does, it will almost certainly not pass through the House of Representatives in its current form. The Democrat-controlled House has proposed its own bill much closer to the $3 trillion stimulus plan passed back in May. With an election only a few months away, some political back and forth is inevitable, and the end result will likely be somewhere in the middle of the two parties’ plans.

Nevertheless, it is highly likely that state contributions towards benefit spending will have to increase. That is bad news for state legislators and for the economy itself, given how slow state spending procedures tend to be. If that happens, Fed policymakers will be scratching their heads. Central bankers do what they can, but if political process or obstinance blocks recovery measures when needed most, rescuing the economy becomes a nigh-impossible task.

However, there may be some room for manoeuvre. As part of its emergency pandemic response, the Fed has already created a $500 billion Municipal Liquidity Facility (MLF) for directly buying up state and local government debt. The MLF is designed only to stabilise the municipal bond market – and does not have the power to finance state budgets as it can Federal ones. As it stands, direct aid to states needs to be authorised by the US Congress, but the Fed is not averse to bending the rules when economically necessary.

Some in the Republican party have tried to paint state crises as political mismanagement, with Mitch McConnell even suggesting that states should be allowed to go bankrupt to stop federal bailouts of Democrat-run states. But dwindling budgets is not a partisan issue. All 50 US states are struggling with revenues, and if those struggles are allowed to continue it will hit Republicans and Democrats alike. As such, Republican politicians are unlikely to block emergency state aid – particularly if done through the Fed’s technical wizardry rather than extensive legislation.

Time is already up for the government’s previous emergency support package, and there are serious political barriers to passing another. The end of the $600 per week payments has come, with nothing to immediately replace it. The US politicians go into their summer recess at the end of next week and brinkmanship has returned to derail the initially positive consensual program. This is yet another example of political risk getting in the way of economic upside for the US. The Fed is doing its part to steady the ship, but as we head into the last few months before the election, we should expect more of the same.